Philadelphia Before the Riots

Religious Nativists were incensed by the Catholics' actions in schools, and it did not help that a majority of the Catholics were also Irish.  The Bible Controversy was not the only factor that played into the riots of 1844.  There were multiple factors at work, including the role the Irish had in the city.  The Irish population had grown in recent years in Philadelphia.  One predominantly Irish neighborhood, Kensington, was one of the hotbeds of anti-Irish sentiment.  The majority of the residents were Catholic and Irish hand-loom weavers.  The population in Kensington had doubled in recent years due to the influx of this group.  Native born people in the neighborhood saw the Irish as unskilled laborers stealing valuable jobs because they would work for cheaper wages.  Competition for jobs and housing was also an issue in Kensington.  This was exacerbated by the depression that occurred from 1839 to 1843 and increased mechanization of weaving and other craft trades.  Lines were drawn between the Protestant Scots-Irish that had lived in Kensington longer and the new Irish Catholic arrivals.

Conflict was no stranger to Kensington and Philadelphia in the years prior to 1844.  Violent strikes were common as an effort by weavers to acquire a living wage.  A proposed railroad line cutting through the heart of Kensington sparked mob violence and succeeded in discouraging the building of the rail line. African-Americans and anti-slavery activists were frequent targets of attack, and the Irish were often on the offensive in these situations.  In addition, fire companies often aligned themselves among political and ethnic lines and fights were common.  When violence did occur, the nature of the city made dealing with problems difficult for officials and the police.  Neighborhoods like Kensington and Southwark were not part of the city limits in 1844 and police jurisdiction was spotty.  Police could only enforce law in their own ward and once someone stepped out of a neighborhood they were able to escape arrest.  Constables were elected for each ward and volunteer posses were formed to deal with violence when it erupted, but because these men were not armed, they were sometimes reluctant to step in.  Like the fire companies, the posses were often formed along political and ethnic lines.  If violence erupted the constable would have to notify the sheriff, who would summon the unpaid and unarmed posse, a time consuming process if it came together at all.  If the posse was unsuccessful, the sheriff would then have to summon the state militia.

The Digital Library holds the electronic representation of a journal owned by Morton McMichael (1807-1879) who was Sheriff of Philadelphia from 1843 to 1846.  The journal details his efforts in forming volunteer posses in 1843 after numerous riots had already occurred. The journal contains notes on meetings describing the creation of the posses, as well as a sort of address book of the volunteer members of the posse. Insight into the formation of the posse can be found:

Whereas in a land where the People make their own Laws, the firm and uniformed administration of those Laws so as to effect the preservation of all rights of person and property, is a duty in which every citizen of whatever class and party is immediately interested: and whereas our city and county has of late been made the scene of various and extensive riots destructive of the peace and safety of Philadelphia city & county, & those riots have in consequence of the inefficiency of the police & hasty and ill organized manner in which the Possees of the Sheriff have been constituted prevailed almost with impunity; Therefore Resolved it is the duty of all well disposed persons to tender their aid to the authorities for the maintenance of peace and good order & that we unite with those of our fellow citizens who agree with is in these views, in forming a voluntary posse to serve at the shortest notice, in any and every emergency which the opinion of the Sheriff render their aid necessary. 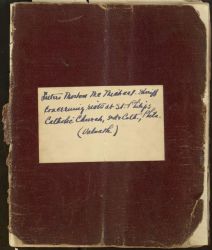 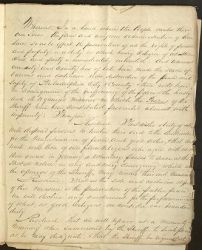 The posse would play an important role in the coming violence.  Due to the combination of economic, political, and religious differences, magnified by the Bible controversy, Philadelphia would prove to be at a breaking point in the spring of 1844. 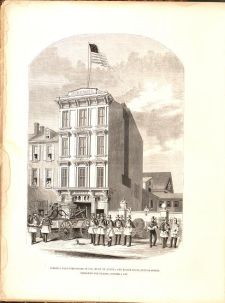 Hibernia Hose Company, An Irish company of firefighters in Kensington