The Know Nothing Party

After the Philadelphia riots, the Native American Party enjoyed great gains in membership and elections. However, despite the fact that 2.9 million people would immigrate to the United States from 1845 to 1854, the party was only able to advance its cause immediately in the wake of ethnic or religious violence.  For the party to succeed in the coming years, it took a combination of factors: the demise of the Whig Party and disillusionment with the existing parties and politicians, revivals of the controversy over the Bible in public schools, and temperance issues.  These elements would allow the formation of the Know Nothing Party and give rise to its success.  In The Origin and Progress of the American Party, John Hancock Lee (1805-1873) sheds light on the perceived need for the party:

The necessity for establishing American Political associations in the large cities of the United States had been seriously felt many years before any active or efficient measures were adopted to that effect.  The rapid influx of foreigners into the country, and the facility with which their votes could be secured by political wire-pullers, had become, the subject of most serious consideration, and of no little alarm.  It was well known that the Naturalization Laws, even as they existed, were a mere dead letter, and that men were yearly brought to the polls, and their votes received, who had not been sufficiently long in the country to have lost the odour of the steerage of the ships that brought them across the Atlantic. (13-14) 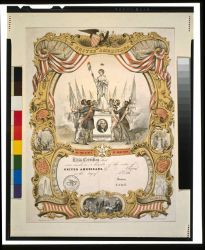 Lee, John H. The Origin and Progress of the American Party in Politics: Embracing a Complete History of the Philadelphia Riots in May and July, 1844...and a Refutation of the Arguments Founded on the Charges of Religious Proscription and Secret Combinations (Philadelphia: Elliott & Gihon, 1855), title page. [Internet Archive]

The Know Nothing Party essentially existed from about the years 1851 to 1858 and was fueled by religious prejudice and political hostility.  The party grew out of the Native American Party with the formation of a secret society of Nativists in 1845 called the Order of United Americans.  Later, in 1849, they would become the Order of the Star Spangled Banner.  Members were required to be a native-born citizen, a Protestant either born of Protestant parents or raised with Protestant values, and not married to a Catholic.  The purpose of the organization was to protect American citizens in their civil and religious rights, and resist policies of the Roman Catholic Church and other foreign influences.  In 1852, this secret society became the party with members known as "knownothings" because of their refusal to answer questions about the association.  Inquiries from outsiders got the response "I Know Nothing" in order to keep from revealing goings-on about the secret society.  Thus, the Nativist movement became the Know Nothing Party, who would later for political purposes become known as the American Party. 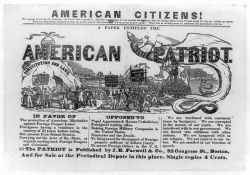 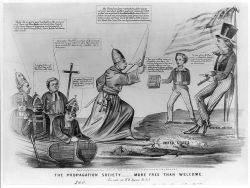 "American citizens! We appeal to you in all calmness. Is it not time to pause?...A paper entitled the American Patriot." Graphic. Boston: J.E. Farwell & Co., 1852. From the Library of Congress: Popular Graphic Arts Collection. [Library of Congress]

Because of the increase in immigration almost every northern state experienced some sort of religious controversy and, once again, Catholics were viewed as trying to undermine the Republic.  At the same time, some politicians were actively courting the immigrant and Catholic votes, and in some cases Catholics were appointed to offices.  This further fueled anti-Catholicism.  Know Nothings were convinced Catholics would make Protestant values illegal and further, if a Catholic was chosen over a Nativist, this was seen as not just the loss of a job, but as precluding the Nativists from advancement in politics.  Also occurring at this time was a temperance movement.  Immigrants were portrayed as carousing with drink on Sundays, while Protestants spent the day in quiet reflection.  Often, immigrants who were running for political office would organize their activities in taverns or other drinking establishments.  The Know Nothings, advocates for temperance, were able to offer a party for those who were looking to end alcohol use.  More disturbingly, the case can be made that the Know Nothings used the cause as another front for bigotry against Catholics.

The collapse of the Whig Party in the north, and the rifts in political parties due to the anti-slavery movement, helped bring the Know Nothing Party into the forefront.  These issues allowed the organization to steal away voters who were disenchanted with their old parties.  The Irish were seen as primarily opposed to ending slavery, and therefore, the Know Nothings took up the cause.  The decision was more of a political strategy than a moral stance.  When the Kansas-Nebraska Act was passed in 1854, there were one million adherents in the party, and the Know Nothings sent forth representatives to Congress.  In 1855, Connecticut, New Hampshire, and Rhode Island elected Know Nothing governors.

The Know Nothing Party branded merchandise and distributed many publications in their favor.  One such publication is the Know Nothing Almanac.  Two of these almanacs can be found in the Digital Library and they afford a look into the views of the Know Nothings.  The introductory section of the 1855 almanac states:

This little volume is respectfully offered to the American public as a useful and reliable hand-book,--as a book of reference and study, and as a class--book for the tyro in the American school of politics...It is often the case that a Native American, an American Democrat, a Whig of '76, or a Know Nothing, desires to enlighten a friend on the subject of Americanism versus foreignism, and to such we suggest this volume of facts as a suitable gift to be sent to friends.

We say that every American, join the Know Nothings; and we also say that every man who denounces American principals is worse than a foreigner, and should be branded upon the brow with the name of JUDAS ISCARIOT. (16)

Throughout the almanac the Know Nothings present immigrants and Catholics in a negative light.  In an article about the "General Principals and laws of the Romish church", there are crime statistics skewed unfavorably toward foreigners, accusations of immoral actions and violence carried out by Catholics, material about how foreigners are unfairly swaying elections, and accounts depicting the Catholic and Irish in the Philadelphia riots as the sole aggressors and cause of the violence.  There are also numerous illustrations, disturbing in nature, which portray Catholics carrying out violent and immoral actions. 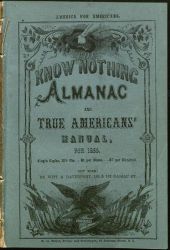 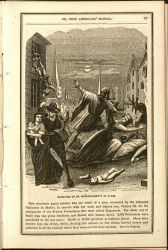 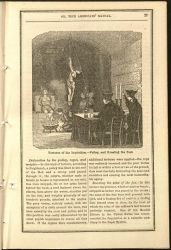 Despite their successes and popularity thus far, the Know Nothing movement would begin to lose momentum after 1854.  The elected members were unable to pass any significant legislation.  In 1856, the party nominated Millard Fillmore on their Presidential ticket but Fillmore would only succeed in winning the electoral votes of one state, Maryland, and James Buchanan would be elected President. Besides their political defeats, the Know Nothings would also be involved in violent rioting and assaults. In 1854, an estimated twenty people were killed in Know Nothing riots in Louisville, Kentucky.  In 1855, Know Nothings in Ohio attempted to fix an election by stealing German ballot boxes.  While the German militia at the scene prevented this action, there was still much rioting.  Finally, in 1857, six people were killed in Know Nothing rioting in Washington D.C.  The violence and bloodshed caused by the Know Nothings did irreparable damage to the party.

With the outbreak of the Civil War, Catholics and people of foreign birth were offered the opportunity to demonstrate their loyalty to the republic.  150,000 Irish born males enlisted in the Union army and were finally able to prove they were patriotic citizens and the Catholic Church was not scheming against the government.

The Nativist spirit of the Know Nothing movement has never quite disappeared.  The goal of the organization is still evident in politically minded movements where discrimination, bigotry, and fear against foreigners or religions exist.  Ideals of the Know Nothings can be seen later in movements such as the American Protective Association and the Ku Klux Klan.  Today, some historians and journalists have found parallels with the Birther and Tea Party movements, seeing the prejudices against Latino immigrants and hostility towards Islam as a similarity. Historians Steve Fraser and Joshue B. Freeman lend their opinion on the Tea Party movement:

Tea Party populism should also be thought of as a kind of identity politics of the right.  Almost entirely white, and disproportionately male and older, Tea Party advocates express a visceral anger at the cultural and, to some extent, political eclipse of an America in which people who looked and thought like them were dominant (an echo, in its own way, of the anguish of the Know-Nothings).  A black President, female speaker of the house, and a gay head of the House Financial Services Committee are evidently almost too much to bear. Though the anti-immigration and Tea Party movements so far have remained largely distinct (even with growing ties), they share an emotional grammar: the fear of displacement.

Anbinder, Tyler. Nativism and Slavery: The Northern Know Nothings and the Politics of the 1850's. New York: Oxford University Press, 1992.