FALVEY LIBRARY
Home Search Guides Help
You are exploring:  Library  >
Exhibits Home  >
Chaos in the Streets: The Philadelphia Riots of 1844  >
May Riots

In the pamphlet The Full Particulars of the Late Riots the following Nativist announcement can be found:

AROUSE, NATIVES BORN!  Take the scales from your eyes--take a peep through the curtain, and behold the sun arise.  A meeting of the Native born Citizens of the Third Ward of Kensington was held on Monday the 29th. After electing officers they adjourned to meet in mass meeting on FRIDAY AFTERNOON, May 3d, at 6 o'clock, at the corner of Second and Master streets.  All friendly to the cause are invited to attend. (3) 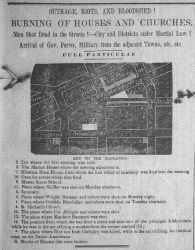 --. The Full Particulars of the Late Riots, with a View of the Burning of the Catholic Churches, St. Michaels & St. Augustines (Philadelphia: Published at 23 N. Second street, 1844), cover. [Digital Library]

Broadside, Map of Kensington Anti-Catholic Riot of May 1844. From the Library of Kenneth W. Milano. Courtesy Dan Dailey. [K.W. Milano]

On May 3, 1844, in the predominantly Catholic and Irish neighborhood of Kensington, the Nativists decided to hold a rally.  Near the meeting site was the Nanny Goat Market, a popular gathering place for the Irish, as well as a Catholic Church, and the home site of Hugh Clark.  Not surprisingly, a large and angry group from the neighborhood convened on the scene, harassing the Nativists and driving them away.

From The Full Particulars of the Late Riots:

The American Republicans of the city and county of Philadelphia, who are determined to support the NATIVE AMERICANS in their Constitutional Rights of peaceably assembling to express their opinions on any question of Public Policy, and to SUSTAIN THE ASSAULTS OF ALIENS AND FOREIGNERS Are requested to assemble on MONDAY AFTERNOON, May 6th, 1844 at 4 o'clock, at the corner of Master and Second street, Kensington, to express their indignation at the outrage of Friday evening last, which was perpetrated by the Irish Catholics, in tearing and trampling under the feet of the American Flag, to take the necessary steps to prevent a repetition of it. (5-6)

Once again, the Nativists attempted to meet at the same location on May 6.  This time, the weather intervened first and the rally was forced inside to the Nanny Goat Market.  Here, as Lewis C. Levin (1808-1860) began to speak on the issue of Popery and the elective franchise, a scuffle ensued on both sides in which bricks and stones were thrown at one another.  At some point a shot was fired in the vicinity of the nearby Hibernia Hose House, although no one knows who fired first.  An Irish Catholic named Patrick Fisher was shot, who some accounts say was trying to stop the fighting.  Before long, havoc would break loose in the neighborhood.  One of the first to be shot and killed was an eighteen year old dresser's apprentice, George Schiffler.  Although most likely caught in the crossfire, Nativist witnesses later portrayed a different view, that Schiffler died trying to raise the American flag.  Soon, houses were being ransacked and destroyed and locals were forced to flee their homes for their safety. One account found in the Digital Library's A Full and Complete Account of the Late Awful Riots reads:

The sights presented...were truly sickening.  Men with their wives, and often six or seven children, trudging fearfully through the streets, with small bundles, seeking a refuge they knew not where. Mothers with infants in their arms, and little ones following after them, carrying away from their homes whatever they coould pick up at that instant, passing along with fearful tread, not knowing where to turn. (32-33) 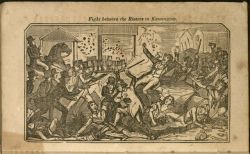 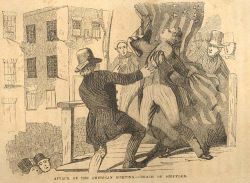 The next morning on May 7th, Nativists held another rally at the State House Yard, now known as Independence Square.  The speakers incensed the crowd with the preceding day's events, and by the close of the meeting the group had agreed to march back to Kensington.  They carried a flag which had been destroyed in the scuffle and carried a sign reading, "This is the flag which was trampled by the Irish Papists."  Upon reaching the neighborhood the rioting once again resumed.  First, the Hibernia Hose Company, home to an Irish Company of firefighters, was attacked and set on fire.  Shortly thereafter, the Nanny Goat Market went up in flames, along with many other homes in the neighborhood, set on fire by the Nativists believing these homes contained Irish Catholics who had attacked them. 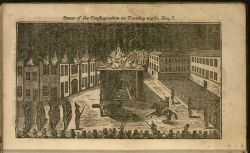 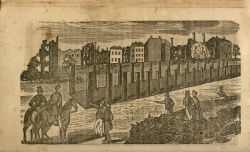 Sheriff McMichael decided to alert the militia since he believed summoning the posse would be futile. George Cadwalader (1806-1879), the brigadier general of the state militia, came on the scene with his men.  By the time they arrived at least thirty homes had been burned.

Later that evening, a meeting of Catholics, including Bishop Kenrick, met in St. John's Cathedral in order to adopt some plans for peace.  Bishop Kenrick authored a statement which was placed on a broadside and distributed amongst the streets.

The melancholy riot yesterday, which resulted in the death of several of our fellow beings, calls for our deep sorrow, and it becomes all who have had any share in the Tragical Scene to humble themselves before God, and to sympathize deeply and sincerely with those whose relatives and friends have fallen.  I earnestly conjure you to avoid all occasion of excitement, and to shun all public places of assemblage, and to do nothing that in any way may exasperate.  Follow peace with all men, and have that CHARITY without which no man can see God. 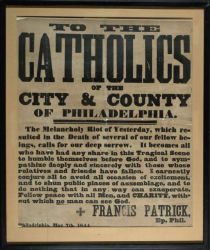 By the next morning the Broadsides had been torn down by Nativists who fashioned them as hats.

On Wednesday, May 8th the rioting continued with yet more houses destroyed, including the home of Hugh Clark.  Some residents in an effort to save their homes began hanging American flags in their windows, or writing "Native American" on their door in charcoal.  Even though the Irish Catholics had instigated the riots at the rally days before, they were soon put on the defensive and were on the receiving end of most of the punishments.  The Nativists had the support of the Protestant press and ministers but the Catholics were mostly left on their own.  Even the militia, who most likely sided with the Nativists, had done very little up until this point.  Many priests had to flee the city and seek refuge in New York, and even Bishop Kenrick was offered help by an Episcopalian clergy member.

A letter describing a division order from Major General Robert Patterson (1792-1881) found in the Digital Library reflects the serious dangers occurring at the time and the militia's actions:

The Sheriff of the County of Philadelphia having this day made a requisition of the commanding officer of this division to operable the force under this command to preserve the public peace, and to prevent the destruction of life and property, the Volunteers of the Division are order to operable forthwith.  The Division will form at 4 o'clock P.M. this day at the corner of 2d and Franklin streets. The respective description of forces will provide themselves with appropriate ammunition. 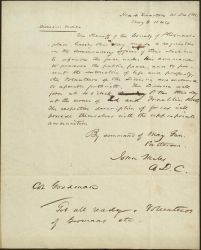 Later in the evening of May 8th, the rioting would take a turn for the worse.  The Sisters of Charity, a female seminary that was mostly vacant, was set fire to and destroyed after its few residents were rescued by some Irishmen.  The angry mob would next set its sights on a Catholic symbol which they had attempted to unsuccessfully destroy previously: St. Michael's Church.

--The Full Particulars of the Late Riots, with a View of the Burning of the Catholic Churches, St. Michaels & St. Augustines. Philadelphia: Published at 23 N. Second street, 1844. 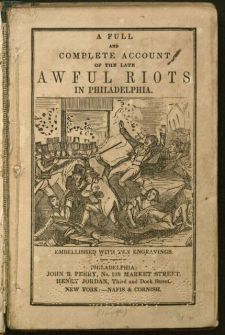