The riots of 1844 would have repercussions in the days, weeks, and years following the violence.  The Nativists, Catholics, and the city of Philadelphia were all affected. 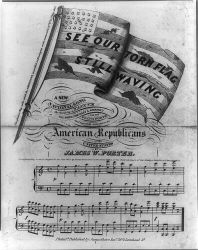 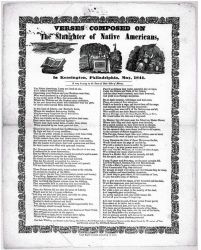 Broadside, Verses Composed on the Slaughter of Native Americans, In Kensington, Philadelphia, May, 1844. From the Library of Kenneth Milano. [K.W. Milano]

Many newspapers would side with the Nativists in the immediate aftermath, giving prejudiced or incomplete accounts which skewed blame towards the Catholics.  The Nativist press and the American Republic Association would gloss over the burning of churches and destruction of homes, and instead blame the Irish Catholics for bringing violent incidents on themselves as a result of the Bible controversy. Indeed many Nativist publications in the following years would paint an ugly picture of Catholics during the rioting.  In The Arch Bishop: Or, Romanism in the United States there is this description:

Great numbers of women now joined the fray, and no tigress ever fought more desperately or frantically for its prey, than these did for their foreign masters..."By the Holy Virgin!" they yelled, as their unbound hair streamed around their hideously distorted visages. (226)

The Nativists would make George Schiffler a martyr for the cause.  A rumored six to eight hundred people attended his funeral, and Nativist accounts and images from the scene of Schiffler's death would place him as a hero for the Nativist cause who had been defending America when he was killed. 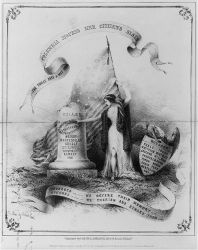 The American Republican Party, which would rename themselves the Native American Party in 1845, would enjoy great gains in membership as a result of the rioting, especially in Philadelphia.  Morton McMichael would ally himself with the Nativist party; his successor as Sheriff in 1846 was also a Nativist and many minor city officials elected in the years following were from the Native American Party.  Lewis C. Levin who had been a speaker at the rally in Kensington was elected to Congress three times between 1844 and 1848.  In 1845 a coalition between Nativists and the Whig Party would win contests in Pennsylvania, New York, and Massachusetts.

The Grand Jury for both the Kensington and Southwark riots would place blame on the Catholics.  The May rioting was blamed on the Catholic effort to exclude the Bible from public schools.  Catholics would respond to the Grand Jury with the statement, Address of the Catholic Lay Citizens...in Regards to the Causes of the Late Riots in Philadelphia.  The Grand Jury was accused of not proceeding with a fair trail by not calling any Catholics to testify, and not presenting any strong evidence of Catholic individuals on which to lay the blame.  Some excerpts from the statement:

In this age and country, and especially in the city to which William Penn gave the name and impress of brotherly love, we presume it is unnecessary to put forward a plea in support of the constitutional and legal right to have our religious predilections respected. (6)

We trust that the grand Jury has been mistaken in tracing its origin; but we pretend not to decide the question, for our desire is, not to attack others, but to defend ourselves. (8)

We are Philadelphians, and we love our city.  Many of us can say, it is the home of our childhood, the habitation of our wives and children--it contains the talus of our fathers. (11)

In closing their response to the Grand Jury, the Catholics present statements from various directors and members of the school board who uniformly state the Catholics were never attempting to remove the Bible from schools.  After the riots Bishop Kenrick would cease with his efforts to influence public schools, and instead turned to establishing a parochial school system.   When the Archbishop of Baltimore died in 1851, Bishop Kenrick was chosen to succeed him and left Philadelphia and his efforts behind. 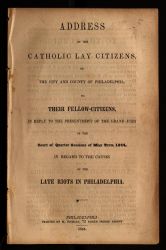 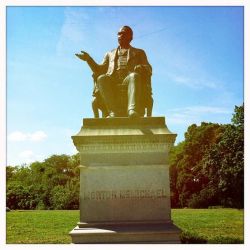 --. Address of the Catholic Lay Citizens: Of the City and County of Philadelphia, to Their Fellow-Citizens, in Reply to the Presentment of the Grand Jury...in Regardsto the Causes of the Late Riots in Philadelphia (Philadelphia: M. Fithian, 1844), title page. [Digital Library]

Sheriff Morton McMichael would go on to serve as Mayor from 1866 to 1869.  After his mayoral tenure he spent the remainder of his life as the first president of the Fairmont Park Commission, and would eventually be rewarded with a statue in Fairmont Park for his influence on its creation.

Morton McMichael was likely helped in his election to the Mayoral office because of his involvement in the consolidation of the city of Philadelphia.  The riots had highlighted the need for a unified police force and paid fire department, and greater authority of the police in the outlying neighborhoods of the city.  In 1850 the State Assembly of Philadelphia created a unified Police District which had authority in the city of Philadelphia, as well as the districts that included Kensington.  After years of pressure, on July 28, 1854, the city of Philadelphia officially incorporated many neighborhoods including Kensington and Southwark. Further, in 1855, the City Council created a single fire department which had jurisdiction over all the volunteer companies, and in 1857 became a full time paid organization under a city ordinance.

The churches of St. Michael's and St. Augustine's would not be forgotten.  Both would be rebuilt not long after the riots, and at present are still serving the Catholic community of all nationalities.  St. Michael's today now boasts of serving worshippers from Irish, German, and Latino backgrounds, and the church holds a mass in Spanish every Sunday.  St. Augustine's can now count in its history a scene in the Academy Award nominated movie The Sixth Sense.  St. Philip de Neri still remains in operation, although the community it serves has changed dramatically over the years. 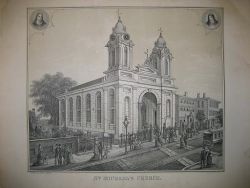 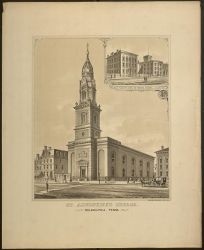 Depiction of the death of George Schiffler