St. Michael's Church was dedicated in 1834, and was built to serve the Irish Catholic community in Kensington.  On the night of May 8th, the church became the target of the angry mob.  An earlier attempt to destroy the church, which began after a false rumor spread that the church was armed, was unsuccessful due to the militia's presence on the scene.  However, the militia was now concerned with attending to some other disturbances and soon St. Michael's was on fire.  The fire was likely set by Irish Protestants, the group that had such issue with the Irish Catholics who had settled into the neighborhood more recently than they had.  Habits from the old country had survived the move to America.  As the church burned, eventually causing the roof and cross on the peak of the church to fall in, the crowd cheered and broke out in playing "The Boyne Water", a popular Protestant folk song. 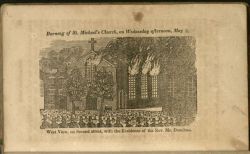 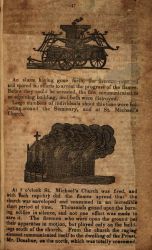 --. The Full Particulars of the Late Riots, with a View of the Burning of the Catholic Churches, St. Michaels & St. Augustines. (Philadelphia: Published at 23 N. Second street, 1844), 17. [Digital Library]

Soon after the burning of St. Michael's, the mob set their sights on another prominent church in the Catholic community, St. Augustine's.  The church's origins dated back to 1796 and the beginning of the Augustinian Order in the United States.  The building itself had been completed in 1801, with President George Washington (1732-1799) and Commodore John Barry (1745-1803) contributing to its construction.  On the church grounds was also a theological library which was the largest in Philadelphia and contained over three thousand volumes.  The church had also started the first Augustinian Catholic learning institution for boys, and was home to the "Sister Bell", a replica of the Liberty Bell that once stood at the State House but now summoned worshippers to the church.  The church was valuable to the community, and during the cholera epidemic of 1832 Pastor Michael Hurley, O.S.A. (1780-1837) opened his residence at the church to all, including to the care of over three hundred and fifty afflicted Protestants.  But on this night, the goodwill had been forgotten.

Around ten in the evening a young boy set fire to St. Augustine's in the vestibule.  An account of the burning of the church can be found in A Full and Complete Account of the Late Awful Riots in Philadelphia:

In a few minutes, the flames reached the belfry, and burst out from the upper windows in broad sheets.  The whole steeple was soon wrapt in the devouring elements, and presented a terrific aspect.  The Chapel clock struck ten while the fire was raging in its greatest fury.  At twenty minutes past ten o'clock, the cross which surmounted the steeple, and which remained unhurt, fell with a loud crash, amid the plaudits of a large portion of the spectators.

In ten minutes afterwards, the steeple, which had stood until burnt to a mere skeleton, fell, throwing up a mass of cinders which fell like a shower of gold upon the buildings and streets north east of the church.  The heat, during the height of the fire, was so intense, that persons could hardly look at the flames at the distance of a square, and the light was so brilliant as to dim even the gas lamps. (30) 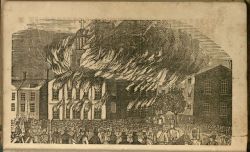 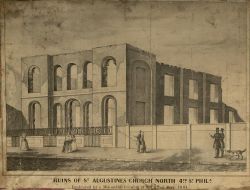 --. The Full Particulars of the Late Riots, with a View of the Burning of the Catholic Churches, St. Michaels & St. Augustines. (Philadelphia: Published at 23 N. Second street, 1844), 21. [Digital Library]

Sadly, the burning of the church was not enough for the mob and they soon set about to burning the remainder of the grounds, including the library.  A book titled Historical Sketch of St. Augustine's Church, Philadelphia, Pa., 1796-1896 found in the Digital Library, gives an account of what came next:

In the parochial residence there was a large, valuable library, which had been collected by the individual efforts of many of the clergy that had studied in Catholic countries, and from time to time a splendid collection of pictures and paintings...had been gathered.  All were destroyed.  Costly, venerable tomes were there, whose places could not be filled.  Series of theologies, volumes of patristical and philosophical worth, histories valuable for the age and matter, all were heaped together and made a bonfire of.  In the dark night, after the fire had destroyed the church, the howling mob of fanatics diverted themselves with the burning of these invaluable books.  Some kind hands saved a few volumes, but the house that Doctor Hurley had converted into a hospital when the dread pestilence of the cholera had swept over Philadelphia of 1832 was devoted to the flames. (80)

Finally, with the burning of St. Michael's and St. Augustine's the military realized the danger of the angry mob and proceeded to heavily guard the remainder of the Catholic churches about the city.  A curfew was enacted by Sheriff McMichael and Mayor John Morin Scott (1789-1858).  On Thursday morning as the militia strengthened its force around the city, calm finally descended on Philadelphia.  A daguerreotype, the first news photograph taken in Philadelphia at the Lagenheim brothers' Merchant Exchange Studio on the morning of May 9, shows such a military gathering at Girard Bank on Third and Dock Streets. 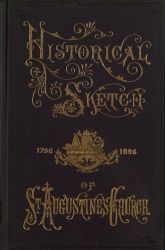 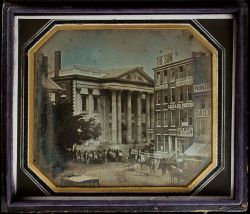 A few days later, as the city of Philadelphia was still under heavy guard an editorial in the Pennsylvanian spoke of the atmosphere in the city:

Such is a Sunday in the nineteenth century in the city of Philadelphia.  Religious toleration enforced by loaded muskets, drawn sabers, and at the cannon's mouth--charity secured through dread of 'grape and canister'.

The Historical Sketch of St. Augustine's summed up the riots in this way:

Ah! Philadelphia, the city of Brotherly Love, had become in '44 the vestibule of infernal hate. (72) 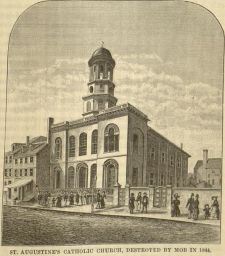 St. Augustine's Church before the Riots of 1844