The Bible Controversy in Philadelphia

In 1838 the State Legislature of Pennsylvania passed a law stating that the Protestant King James Bible was a mandatory textbook in public schools.  This meant Catholic children in public schools would now have to read from a book their faith did not approve; children who refused were likely subject to ridicule.  At this time, Catholic children in Philadelphia primarily attended public schools since the Catholic community did not yet have funds for a parochial school system of their own.  Catholics up until this point had remained mostly quiet about the discriminations they faced from Nativists.  An exception to this had occurred in New York City where the Catholic Bishop John Hughes (1797-1864) had championed for more Catholic rights in schools and had obtained some minor victories.  The Catholic community in Philadelphia was growing concerned and so Bishop Francis Patrick Kenrick (1796-1863), the Bishop of Philadelphia, took a cue from the events in New York and composed a letter to the school board of Philadelphia in 1842.  In this letter he requested that Catholic children be allowed to read the version of the Catholic Douay Bible in schools and that they be excused from participation in Protestant religious activity.  The school board replied in early 1843 with a compromise: Catholic children would be excused from reading the King James Bible and any Bible "without note or comment" would be permitted as a substitute.  Since the Douay contained commentary it was thus banned from public schools.

Bishop Kenrick decided not to push the issue any further but the damage was already done in the eyes of the Protestant community.  Protestants argued that they were the majority and the majority should always have the rule.  Many Protestants saw their principles and the King James Bible as essential to and in harmony with democracy.  Instead of being seen as exercising their civil liberties, the Catholics were viewed as being opposed to self-government.  Even though the Catholics never requested the removal of the King James Bible, Protestants interpreted their actions as such.  In response, better organized Nativist groups were formed.  First, in 1824, eight ministers from every denomination in Philadelphia formed the American Protestant Association with the mission to warn Protestants of the dangers of Catholicism.  A pamphlet called The Truth Unveiled describes the movement this way:

The formation of such a society was regarded by all, who dared to think upon matters with reference to their results, as the war-cry for Protestants to take the field against Catholics; for the summons to renew their battle, in which Christian was to be seen contending with Christian, and the very altars of God were to be desecrated by their priests; who instead of bringing upon them the offering of broken hearts and contrite spirits, cast there the sharpened sword without its scabbard, the weapon for bloody strife, that were dedicated to the work of religious or rather sectarian persecution. (13)

In 1843 in New York City the American Republican Association (later known as The Native American Party) was born.  They believed in laws limiting foreigner's rights and formed an alliance with the American Protestant Association.  Thus, these groups became a strong force against Catholic and immigrant rights. 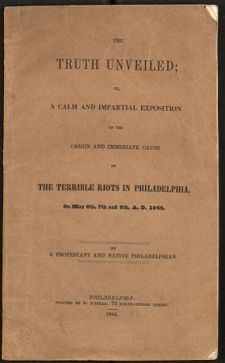 Protestant, and N.P. The Truth Unveiled, Or, a Calm and Impartial Exposition of the Origin and Immediate Cause of the Terrible Riots in Philadelphia on May 6th, 7th, and 8th, A.d. 1844 (Philadelphia: Printed by M.. Fithian, 1844), cover. [Digital Library]

The last straw, and possibly the spark that led to rioting in May of 1844, was a disagreement purported between Hugh Clark (1796-1862), a Catholic and director of public schools, and Miss Bedford, a public school teacher, in early 1844.  A rumor spread that Mr. Clark had ordered Miss Bedford not to read from the Protestant Bible.  All sides involved told a different story.  Mr. Clark and Miss Bedford claimed that she was only seeking advice from Mr. Clark due to the chaotic nature of her classroom.  Some notes taken of the testimony of those involved can be found in the Digital Library and help tell the story of the events that transpired. Miss Bedford's statement:

Mr. Clark did not say I should discontinue the reading of the Bible, but he said if I would do so he would take the responsibility.  He told me not to dispense with the reading the, during the excitement, but to do it gradually.

When Ald Clark and I came up to Miss Bedford's room, after the subject was introduced concerning the reading of the bible, she mentioned to the Ald, "Mr Clark you told me that if I would dispense with reading the bible you would take the responsibility upon yourself.  He replied, I did; and if the bible is continued to be read in school, I will have the other bible introduced according to the resolution of the Board of Control, and that I never want to do. He said, I never wish to see confusion on the schools."

I understood Miss Bedford to say that she would rather dispense with the reading of the bible that have such confusion. 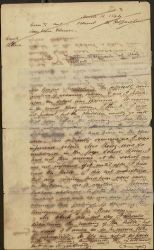 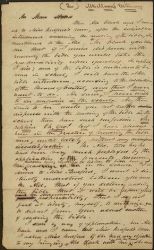 Despite the evidence absolving Hugh Clark of any wrongdoing, the facts were of no importance to the Nativists.  Catholics continued to be seen as immigrants who were dangerous foreigners and a threat to the Protestant and American way of life. 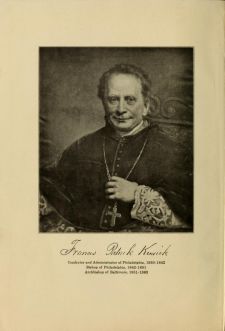