Nativism was a movement that was anti-foreign and anti-Catholic in nature.  The movement began with an increase of German and Irish immigrants to America in the 1820's and 30's, many of whom were Catholic.  At this time the majority of Americans was Protestant and saw Catholicism as a major threat to their way of life.  Protestants believed that Catholics pledged their allegiance primarily to the Pope and this type of loyalty was seen as suppressing free thought and a threat to democracy.  By the 1830's and 40's many Nativists were entering into the political scene both nationally and locally on platforms that stood against "Romanism."  In order to protect the Protestant Republic Nativists were seeking to extend the period of naturalization to twenty-one years, elect only native born citizens to office, and reject foreign interference in all institutions: social, religious, and political.  Nativist writings also started to appear at this time.  Samuel F.B. Morse (1791-1872), inventor of the Morse Code, wrote commentaries about the dangers of foreign communities.  He and other Nativists saw close-knit immigrant communities as proof of "clannish" ways and as an attempt to resist "Americanization."  A sermon written by Thomas Brainerd (1804-1866), a pastor in Philadelphia, titled Our Country Safe from Romanism demonstrates the anti-Catholic sentiment felt by Nativists and Protestants:

The acknowledged doctrines of Romanism are inconsistent with the Bible and common sense--that her organization and usages unfriendly alike to religious liberty, to the elevation of society, and to the salvation of souls. (7)

If our civil and religious liberties are about to be annihilated--if the light of Protestant Christianity be here flickering in the socket--if the Bible be about to be re-consigned to the cobwebs of convents, and the returning mists of the middle ages are threatening to re-enshroud in darkness and gloom, the glorious sun of righteousness, then the alarm cannot sound too loud or too long. (8) 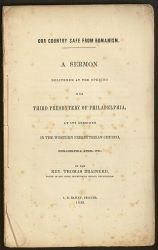 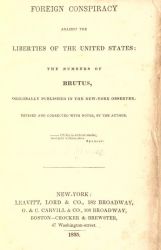 Not surprisingly a number of conflicts arose between Catholics and Nativists during this time.  One of the most disturbing occurred on August 10, 1834 in Charlestown, Massachusetts when an angry Protestant mob set fire to and destroyed an Ursuline Convent and School.  Historians debate about the exact cause of the incident, but a combination of anti-Catholic speeches occurring in the area along with a false belief by Nativists that the nuns at the convent were acting immorally most likely incited the violent act.  All those brought to trial were acquitted of the attack and no compensation was awarded to rebuild the convent, thus demonstrating an underlying acceptance of anti-Catholic sentiment.

Shortly thereafter in 1836, a sensational book titled Awful Disclosures of the Hotel Dieu Nunnery of Montreal was published.  The book supposedly details the author's daring escape from a convent where she was abused by priests and saw nuns murdered.  The book was most likely fictional, but still added fuel to the fire of the Nativist movement. It was also a huge success, eventually selling three million copies by 1860. 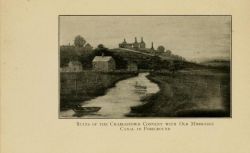 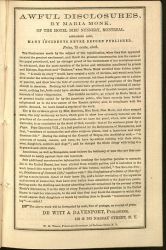 Monk, Maria. Awful Disclosures by Maria Monk, of The Hotel Dieu Nunnery of Montreal; With An Appendix; An Supplement Giving More Particulars of the Nunnery and Grounds. London: James S. Hodson, 1837. 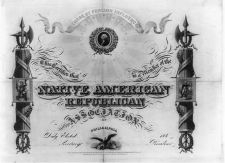