July of 1844 would prove to hold another string of violent days in Philadelphia.  On July 2nd, Pastor J. Patrick Dunn (1809-1869) of St. Philip de Neri, a Catholic church in the neighborhood of Southwark, received a worrisome letter.  Sent by a female schoolteacher, the letter warned an attack on St. Philip's was imminent.  With the attacks on St. Michael's and St. Augustine's still fresh on everyone's mind, the Pastor decided to seek help.  With permission from Governor David Rittenhouse Porter (1790-1879) and General Robert Patterson, of the Pennsylvania Militia, Pastor Dunn obtained arms in order to protect the church.  In addition, General Patterson put his troops on alert, and Governor Porter authorized the formation of a company to protect the church.

The following day, Independence Day, the Nativists held a parade in Southwark.  Nativists from Philadelphia and the surrounding areas came to march in the parade with flags and banners celebrating America and proclaiming their cause.  The Catholic Herald approximated 4,300 in attendance, and gave this account of part of the procession:

The banner carried by this ward was painted...on which represented Liberty with an American flag thrown round her as a mantle, and her hands a Bible. She stands beside a pedestal, above which is an Eagle, grasping with one claw a picture of Washington, surrounded by a laurel wreath, while the other holds a Liberty Pole; from the beak floats the motto: 'Beware of Foreign Influence.' Against the pedestal a bundle of rods is leaning, bound round with a fillet, on which appears the motto, 'United, who can break us.' A serpent is lying dead at the feet of Liberty pierced with an arrow, while Fame is soaring aloft, proclaiming the extinction of the Papal Influence. 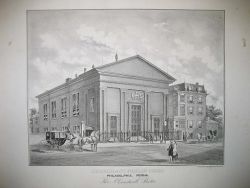 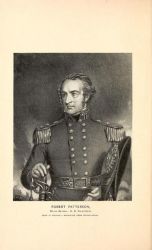 On July 5 a mob started to form outside St. Philip de Neri.  They had learned the church had obtained weapons and were demanding a search of the church and removal of the weapons.  Later, Sheriff Morton McMichael would recount his experience in testimony.  A pamphlet in the Digital Library titled The Olive Branch, Or, an Earnest Appeal in Behalf of Religion, the Supremacy of Law, and Social Order recounts Sheriff McMichael's memory of an alderman's advice:

He repeated the statement to me about the arms, described the excitement, and expressed the opinion that the only possible way to allay it was to remove the arms. (39)

The Sheriff proceeded to search the church and remove the arms he found.  However, the mob felt a sufficient search had not been conducted and demanded more.  A committee from the mob was allowed in the church to do their own search, and did indeed find more weapons that were removed.  Instead of satiating the mob, this discovery only further angered them and as late night turned into morning the mob increased in number.  Seeing the danger of the situation the Sheriff called on General Cadwalader and General Patterson for aid.  Morton McMichael from The Olive Branch:

I summoned the volunteer posse; I gave notice in writing to Major General Patterson, that he should have any number of companies, not less than ten, ready to act. (41) 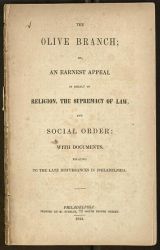 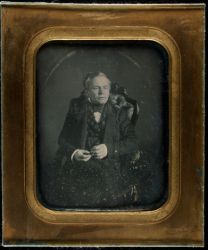 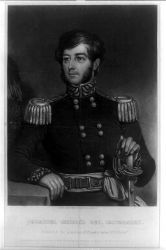 --. The Olive Branch, Or, an Earnest Appeal in Behalf of Religion, the Supremacy of Law, and Social Order: With Documents Relating to the Late Disturbances in Philadelphia (Philadelphia: M. Fithian, 1844), title page. [Digital Library]

General Cadwalader came onto the scene bringing heavily armed troops from the area of Germantown. This angered the mob, who did not see the militia as legitimate and interpreted their involvement as unnecessary.  The General pleaded with them for peace, at which point he and the militia were mocked and violence broke out.  The mob assailed the militia with stones and bricks, and the order to fire was given.  At this point a man named Charles Naylor (1806-1872), a former Congressman from the Whig Party, stepped in pleading not to fire.  He succeeded in keeping any shots from being fired, but was arrested along with other members of the mob and placed in the church basement.

By the next day, July 7, the mob had increased in number.  A letter sent to Governor Porter and General Patterson from Sheriff McMichael reads:

The City & County of Philad are at present at a state of insurgency.  The force at our command will I am afraid prove utterly insufficient for the Emergency & therefore I respectfully request that you will take such immediate measures as may seem to you are necessary.

The mob was attempting to batter the church with a cannon in order to obtain the release of Charles Naylor, who had become a symbol for the cause overnight.  Mr. Naylor was eventually released by his captors in the hopes it would calm the mob.  While they did cheer the release of their hero, the mob's anger did not subside.  They were now unhappy that an Irish group, the Hibernia Greens, was in charge of protecting the church.  The mob demanded the Hibernia Greens give up the church, promising not to assault them, or the church would be attacked.  In order to protect the church the Hibernia Greens agreed to leave, but the mob's assurances proved false.  The Sheriff's testimony recounted in The Olive Branch:

Hibernia Greens had been compelled to abandon the church, that the men had fired, and that one of their number had been captured by the mob, beaten severely, and supposed to be killed. (43)

The mob then took over the church, but thankfully did not succeed in setting it on fire even though they had attempted to do so.  At this time General Cadwalader reappeared.  He repeated his command for the mob to leave the scene, and was once again assailed with stones and bottles. After being overcome by the mob, the militia fired.  The violence and killing occurred on both sides, but the mob was not deterred.  Over the course of the evening, the mob obtained more weaponry and cannons. Combat lasted until the early morning. 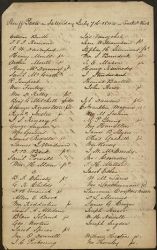 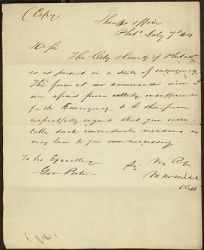 The next morning with no abatement of the mob's anger, the civil authorities of Southwark requested of the Sheriff the removal of the militia, believing they were only worsening the situation.  The Sheriff relented and gave notice to the aldermen of Southwark that they would have to guard St. Philip's.  A letter from the Sheriff in the Digital Library reads:

You are requested to summon and call out the Citizens in your respective wards for the relief of the military force now having charge of St. Philips Church and to take charge of and protect the same from attack until further orders.

Still concerned about the possibility of further attack, the Sheriff released this statement:

Morton McMichael, Sheriff of the said city & county of Philad being duly sworn according to law doth declare I say, that he hath reason to believe, that new insurrection is now existing in the said city & county, which cannot be suppressed without the aid of supplies of ammunition from the General Government of the U.S.

The militia would withdraw on July 8 and the mob did disperse.  In addition the Governor issued a proclamation for peace and disarming of citizens.  While people did not agree to disarm, peace once again settled about the city, and without any major harm to St. Philip's.  This time the riots had brought crowds who believed in protecting patriotism and guarding against foreigners but had also drawn those who just wanted a reason for violence.  There had been very little actual Catholic involvement this time despite the church being a symbol of the mob's anger.  The clash instead turned out to be primarily between Nativists protecting their home turf, and the outside troops who they believed should not have gotten involved.  In the days following, there was strong criticism of the troops and those in charge of them.  A pamphlet in the Digital Library, Street Talk About an Ordinance of Councils Passed the 11th of July, 1844, Organizing a Military Force for the Government of Philadelphia detailed the negative feelings about the military involvement.  Whatever the reason, the riots proved deadly and destructive for the city and would have lasting repercussions.  When the rioting finally ended, the tally from May and July estimated twenty had died and over one hundred were injured. 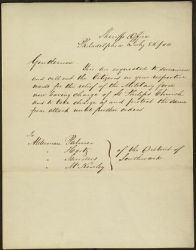 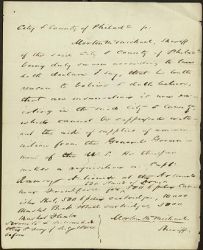 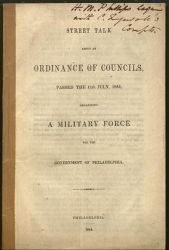 --. Street Talk About an Ordinance of Councils Passed on 11th July, 1844, Organizing a Military Force for the Government of Philadelphia (Philadelphia: s.n., 1844), title page. [Digital Library]

Song lyrics about the riots of July, 1844