Getting from here to there

Before the advent of steam engines, getting to your destination was an adventure in itself.  These days, 24 hours' worth of travel can take you to the other side of the world.  In the eighteenth century, before steamships and railways, the "short" journey from London to Dublin could take more than a week.  First you had to make your way to a port town, usually by coach or on horseback.  There were four main ports from which to make the crossing: Port Patrick (Scotland) to Donaghadee (County Down), Bristol to Cork, and Liverpool (England) or Holyhead (Wales) to Dublin.  The crossing itself was entirely dependent on the tides and the weather: some travellers wrote about ships that battled 27- or 40-hour storms – and after battling the elements for so long, some ships were forced to turn back, even if they were already in sight of Ireland's shores.  Besides fierce headwinds, some ships had to contend with the lack of wind, sitting becalmed upon the sea with no means of moving until the wind returned.  In addition to the elements (or lack thereof), ships that took the southern-most route between Bristol and Cork also risked encounters with Spanish and French privateers.  The introduction of steam power in 1819 took much of the uncertainty and discomfort out of the sea crossing, with the result that most trips could be made in 24 hours or less – from Holyhead to Dublin took only six hours by steamship. 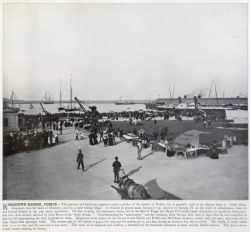 Bush, John. Hibernia Curiosa. A Letter from a Gentleman in Dublin, to His Friend at Dover in Kent. Giving a General View of the Manners, Customs, Dispositions, &c. of the Inhabitants of Ireland. With Occasional Observations on the State of Trade and Agriculture in that Kingdom ... Collected in a Tour through the Kingdom in the Year 1764 ... London: Printed for W. Flexney, [1769]. [Internet Archive]

Once having crossed the Irish Sea, travellers could choose from a variety of land transportation with such fanciful names as noddies, jingles, bians, and the ubiquitous jaunting car – all variations of horse-drawn carriages.  Other transportation options included stagecoaches or mail coaches, and, from the end of the eighteenth century, passenger boats along Ireland's developing canal systems. 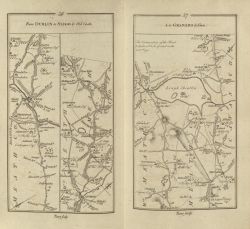 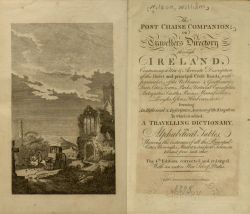 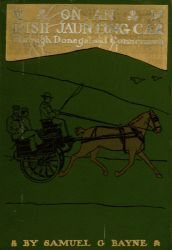 Taylor, George and Andrew Skinner. Taylor and Skinner's Maps of the Roads of Ireland: Surveyed in 1777 and Corrected Down to 1783. 2nd ed. London: Published for the authors; sold by T. Longman, 1783. [Digital Library]

Besides roadways, cities, and towns, Taylor and Skinner's maps also marked "castles in ruins," rivers and lakes, churches, bridges, "hills & rising grounds," and the seats of noblemen and gentlemen.  The maps provide mileage in both Irish miles and English Statute Miles, and the authors offered a note about the difference in the prefatory pages.  Eleven Irish miles translated to fourteen English miles—if a traveller was informed that their destination was "only a few miles away," the difference between Irish and English miles could mean several more hours on the road.

The first railway in Ireland opened in 1834, operating between Kingstown – by then, the major port of entry on the South side of Dublin Bay – and Dublin.  In 1842, another relatively short route was added between Belfast and Lisburn and Portadown.  The rail system really began expanding in the 1840s, even as the country suffered through the Potato Famine.  The Great Southern and Western Railway connected Dublin and Cork in 1849 and Dublin and Galway in 1851.  Although not all popular tourist destinations were along railway lines, necessitating further transport via jaunting car or another vehicle, the railways connected many of the main cities, allowing tourists more time at their destinations and less time en route. 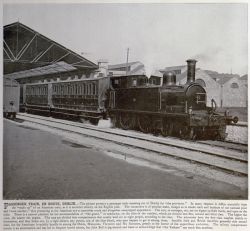 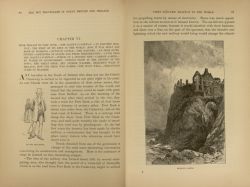 Knox, Thomas Wallace. The Boy Travellers in Great Britain and Ireland: Adventures of Two Youths in a Journey through Ireland, Scotland, Wales, and England, with Visits to the Hebrides and the Isle of Man. New York: Harper & Brothers, 1891. [Digital Library]

The Boy Travellers series was a fictional account of the travels of Frank and Fred Bassett (and occasional other companions) throughout the world.  Although fictional, the author claims to have "taken great care to insure accuracy" with regard to historical matter.  On the pages above, Frank relays some information about the Giant's Causeway Tramway, which was the world's first hydroelectric train in 1883. 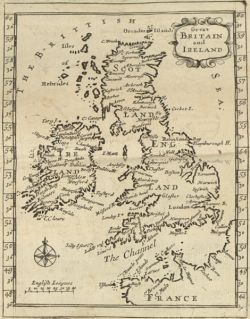 Map of Great Britain and Ireland, from A geographicall description of ye kingdom of Ireland collected from ye actual survey made by Sr. William Petty... (1689). [Digital Library]