Guidebooks and the Tourist Industry

Beginning in the nineteenth century, guidebooks began to take on a more streamlined look, with well-indexed sections that made it easy to flip to a certain area of interest and a more compact shape.  Although many of the travel narratives published prior to and into the nineteenth century were used as guidebooks, the books naturally focused on the journey of one specific traveller (or one specific group of travellers, if it was the work of a husband and wife or a family) and their own opinions and impressions of what they saw.  The new guidebooks, now compact enough to be called “handbooks,” were easier to carry along on a trip and provided a more historical/factual focus on the sites, rather than a personal account.  However, this is not to say the handbooks were neutral.  Whether intentionally or not, bias often creeps in, even in today's guidebooks.  Sometimes guidebooks contain blatant propaganda, clearly favoring certain ideas while deriding others.  But there is also the problem of selection: In presenting snapshots of a country or region in compact form, it is impossible to present all aspects.  Limited by space, the selection of what is included and what is left out can be problematic – sometimes what isn't said speaks as loudly as what is.

The new guidebooks developed alongside the expansion of the tourist industry.  No longer the sole domain of the wealthy aristocrats, the nineteenth century saw a great boom of travellers from the upper-middle class.   And with the development of quicker, cheaper, and more reliable modes of travel, as well as the early twentieth-century introduction of paid vacation time as part of a worker's benefits in most of Western Europe, the working classes could also find the time and money to travel.  The influx of travellers led to the development of a better infrastructure – improved modes of transportation, roads, and accommodations.  With industry comes profit and propaganda, resulting in the creation of companies devoted solely to tourism – the railway companies, for instance, besides operating a network of trains, also set up hotels and published their own guidebooks, advertising tours that could be enjoyed through their services.  Those guidebooks that were not published by travel and tourism companies included advertisements for their services.  Tourism boards and agencies sprang up at the national, county, and city levels as well. 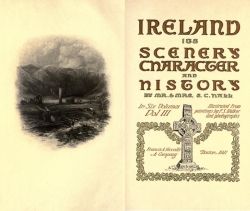 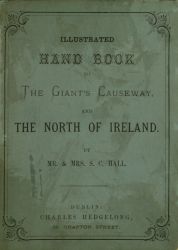 Samuel Carter Hall (1800-1889) and Anna Maria Hall (1800-1881) were a husband and wife team who travelled throughout Ireland in the mid-nineteenth century.  Both came from Anglo-Irish families, although they pursued their careers in England, where Samuel was an editor and Anna wrote short stories and novels.  Their multivolume account of their travels through Ireland, originally published as Ireland, Its Scenery, Character, etc. in three volumes from 1841 to 1843, was reprinted in several later editions with varying titles and numbers of volumes, even into the twentieth century.  The edition shown here is a six-volume "Celtic Edition" from 1911.

The Halls capitalized on the success of their multivolume work by later breaking the content into smaller, regional hand-books, such as the above guide for the Giant's Causeway and the North of Ireland.  Rather than just straight reprints, however, the Halls revisited the places they had discussed previously to provide updated information. 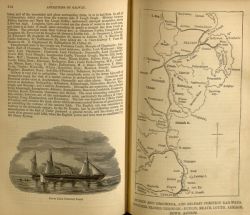 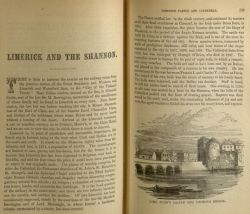 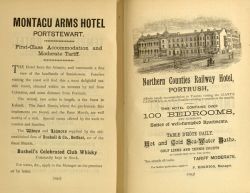 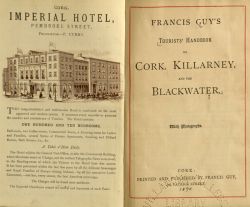 Francis Guy's Tourists' Handbook to the South of Ireland: With Photographs and Map. Cork: printed and published by Francis Guy, [1890?]. [Digital Library] 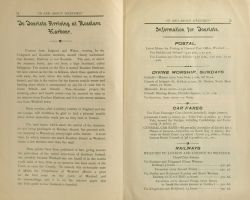 Corporation of Wexford. In and about Wexford: An Illustrated Tourist Guide to Wexford and Vicinity. Wexford: Printed at the Free Press Office, [19--?]. [Digital Library]

Maguire, M. J., ed. Through the Garden of Ireland: An Illustrated Tourist Guide to the Counties of Wicklow, Wexford and Waterford. Dublin: Browne and Nolan, Ltd., 1912. [Digital Library] 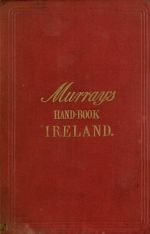 The publisher John Murray produced a popular series of handbooks that came to be known by his name.  Murray's was one of the first brand-name guidebooks, like today we have Fodor's or Eyewitness.

The German publisher Karl Baedeker produced a rival brand of guidebooks that eventually supplanted Murray's line.  Baedekers became a household synonym for guidebooks in general and the novelist E.M. Forster made fun of their popularity in A Room with a View (1908). Curiously, Baedeker never produced a guidebook for Ireland in English, although there were guidebooks for England, Scotland, and Wales.  For more, see In Ireland with No Baedeker. 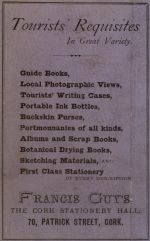 Francis Guy's Tourists' handbook to Cork, Killarney and the Blackwater (1890?).

Advertisement for "tourists' requisites" from:
Guy, Francis. Francis Guy's Tourists' Handbook to the South of Ireland: With Photographs and Map. Cork: printed and published by Francis Guy, [1890?]. [Digital Library]