British tourism in Ireland developed as a result of several influences: the relative calm in Ireland that followed the turmoil of the sixteenth and seventeenth centuries, the strain in relations with France toward the end of the eighteenth century, and finally the Napoleonic Wars at the beginning of the nineteenth century, which made travel to the Continent difficult and dangerous.  In addition to these historical factors, changing attitudes and the popularization of Romantic ideas led to the picturesque pleasure tour developing as an alternative to the more academic and aristocratic Grand Tour.  Landscape appreciation gained favor throughout the eighteenth century, particularly with the publication of several essays on the concepts of the sublime, the beautiful, and the picturesque.  The "Home Tour," on the island of Great Britain, and the "Irish Tour" provided ample opportunity for admiring the picturesque.

Besides these reasons, there was also an increasing interest on the part of the British in their "sister island."  Particularly after the Act of Union in 1801, British travellers to Ireland attempted to understand this other part of their country.  For some, this simply meant touring the country and admiring the landscape, but for others, this meant evaluating and reporting on the economic and social conditions of Ireland.

As a result, there were many attitudes and motives among the Irish travel writers.  Before there were guidebooks of the kind with which we are familiar today – facts and reviews that strive for impartiality with few embellishments – travellers often used the published accounts of previous travellers as their guide to what to see and do – and, of course, what to avoid.  This section presents some of the most popular writers as well as their diverse reasons for travelling through Ireland. 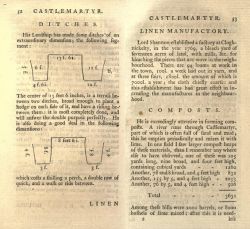 Campbell, Thomas. A Philosophical Survey to the South of Ireland: in a series of letters to John Watkinson, M.D. London: W. Strahan and T. Cadell, 1777. [Internet Archive]

Young, Arthur. A Tour in Ireland: With General Observations on the Present State of that Kingdom, made in [the Years 1776, 1777, and 1778 and Brought Down to the End of 1779]. Dublin: Printed by G. Bonham for Whitestone Sleater Sheppard Williams Burnet Wilson Jenkin Wogan Vallance White Beatty Byrn and Burton, [1780]. [Internet Archive: vol. I, vol. II]

Thomas Campbell (1733-1795) was born in County Tyrone.  British prejudice against the Irish ran deep, as evidenced in many descriptions of people encountered by travellers in Ireland.  Campbell, an Anglo-Irish clergyman, published his work anonymously and dated the prefatory advertisement from London, perhaps in the belief that British readers would not otherwise credit what he had to say.

Arthur Young (1741-1820) was an English agriculturalist.  Interested in reforming agricultural practices, he travelled through Ireland from 1776 to 1779, recording and evaluating the methods he observed.  Despite his mainly economic motivation for the his travels, he also took time to describe such scenes as the "wild magnificence" and "all the glories of Killarney" (92). 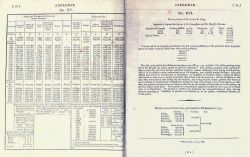 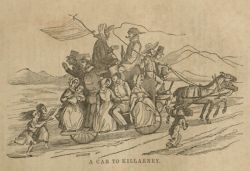 Thackeray, William Makepeace. Sketches in Ireland by W. M. Thackeray; embellished with thirty-eight beautiful engravings, illustrating the best characters and scenes in the work, and drawn by the author on the spot. Philadelphia: T.B. Peterson, 1850. [Internet Archive, 1879 edition]

Thomas Newenham (1762-1831) was born in County Cork and known for his writings on the topic of Irish affairs.  In this work, as the title indicates, Newenham discussed "the natural, political, and commercial circumstances of Ireland."  He deplored the British tourists in Ireland who "have neither had sufficient leisure, nor inclination to make themselves thoroughly acquainted with the circumstances of the country" (xii), all the while making inaccurate diagnoses for a land which they do not fully understand.  Newenham therefore set about describing the agricultural and economic conditions in Ireland as he saw them, following the example of Mr. Arthur Young.

William Makepeace Thackeray (1811-1863), an English novelist, published an account of his travels in Ireland in 1843.  The work was much reviled in Ireland for its poor depiction of the Irish people.  This illustration depicts tourists crowded on a car en route to Killarney.  "After discussing the luncheon," Thackeray wrote, "we found the car with fresh horses, beggars, idlers, policemen, &c., standing round, of course; and now the miraculous vehicle, which had held hitherto seven with some difficulty, was called upon to accommodate thirteen" (59). 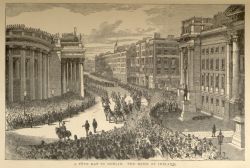 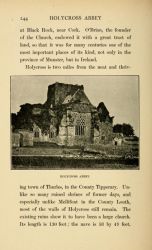 Russell, T. O. Beauties and Antiquities of Ireland: Being a Tourist's Guide to its most Beautiful Scenery & an Archaeologist's Manual for its most Interesting Ruins. London: Kegan Paul French Trubner & Co., 1897. [Internet Archive]

The Halls were an Anglo-Irish husband and wife team whose popular account of their journeys through Ireland was republished in various formats over the years.  In the prefatory matter and throughout their narrative, the Halls took care to assure their readers of the safety of travelling in Ireland, despite the political atmosphere.  In the preface to an 1841 edition of their work, the Halls wrote that their main objective was "to direct public attention to Ireland, and to induce visiters to examine it for themselves.  We repeat, there is no country in the world so safe or so pleasant for strangers; while so abundant is the recompense of enjoyment it can supply, that for every new visiter it receives, it will obtain a new friend."

T.O. Russell highlights the "beauties and antiquities of Ireland."  Ruins and other traces of antiquities were another popular attraction for travellers.  Ruins formed an important part of the ideal Romantic landscape, providing plenty of visuals for discussing the emotions of the picturesque and the sublime.

This is a collection of short fiction about Irish life.  Barlow (1857-1917), writing in 1911, comments on the elusiveness of a strict definition of Ireland:

These, and many more somewhat unreasonable requisitions, seem to be, in a great measure, the result of our attempts to imprison in definitely worded statements what is really an atmosphere, elusive, impalpable, with the property of lending aspects bewilderingly various to the same things seen from different points of view. (3)