FALVEY LIBRARY
Home Search Guides Help
You are exploring:  Library  >
Exhibits Home  >
You can learn a lot from ADVERTISING  >
Medicinal

The weekly newspapers and magazines became the perfect medium, in the early 20th century, for advertisements claiming medical “cure all” products and remedies for other health issues.  Many of the sick lived in rural areas, doctors were not readily available to care for them. The distance and lack of funds prevented many of the sick to seek out a doctor. It was in this environment that the "cure all" advertisers were able to promote the product and tout their medical successes.

"It would make a better furniture polish than tuberculosis remedy."
wrote Dr. Charles J. Hatfield about Addiline in 1920. 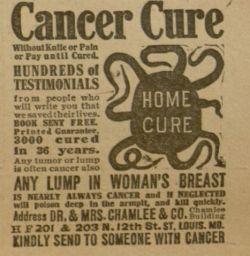 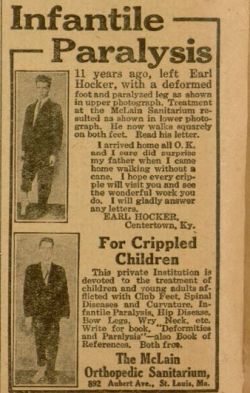 In Encyclopedia of Children and Childhood: In History and Society, author Watts addressed the issue of epidemic in New York City, in the article "Epidemics," when he wrote, ". . . the so-called summer plague, more usually known as poliomyelitis or infantile paralysis. In the summer of 1916, several thousand middle-class children in New York City and the surrounding region were struck with a strange new disease. Although outright death was rare–because hospital care was available–many survivors were left severely crippled in their legs and unable to walk. Other less fortunate survivors suffered impairment of their breathing apparatus and had to be placed in an iron lung. . . " [Watts 326] 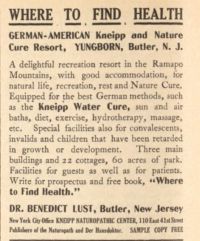 “More attractive to mid-19th-century Americans were various non-exercise treatments, cures, and dietary schemes designed to encourage overall health and well-being. Naturopathy, including such practices as hydrotherapy, electrotherapy, herbal medicine, nutrition, massage, and homeopathy, drew on the Hippocratic notion of the healing power of nature and the capacity of the body for regeneration.”  [Encyclopedia Britannica] 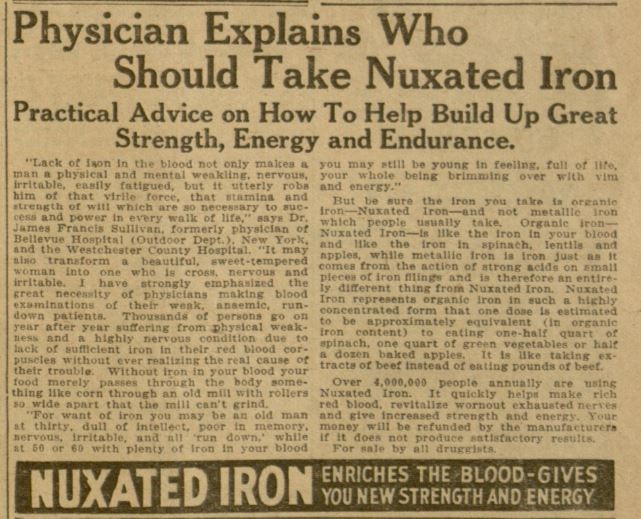 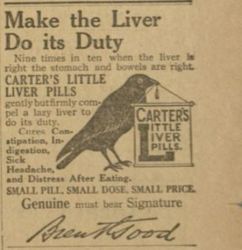 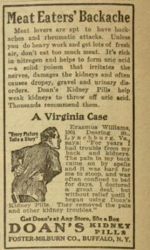 Michigan Food and Drug Monthly, in 1919, wrote, “. . . The obvious intent of the Doan’s Kidney Pills advertisements is to lead the public to believe that a pain in the lower back indicates kidney disease. It indicates nothing of the kind. . . . Doan’s nostrum, is a powerful irritant to the kidneys and may cause the most serious damage to kidneys that are already diseased.” [Michigan 7]

See Ayer's Sarsaparilla formula, as published in 1891 by Charles
Oleson, in Secret nostrums and systems of medicine; a book of formulas. 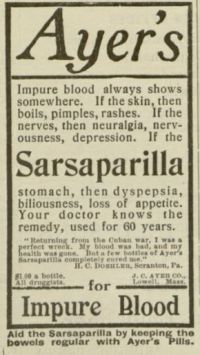 "Patent medications weren’t nationally regulated until the 1906 Pure Food and Drug Act, and even after that, it was updated and amended many times to include more regulations on what shouldn’t be included in over-the-counter medications . . . So for a long time, medicines had ingredients that would never be allowed today.”
Katherine Ott, curator, Division of Medicine and Science at the Smithsonian’s National Museum of American History

". . . patent medicine purveyors quite effectively exploited popular - and very real - anxieties about health and well-being at a time when formally-trained physicians were expensive and difficult to come by . . ." [Woloson]

"The services rendered by the American Medical Association in its battles against quackery have been widely recognized as one of the most important services in behalf of the people of the United States. The effects of its exposes have been most salutary in preventing quackery and charlatanism which might well have been rampant, at least until the passing of the more recent Pure Food and Drugs Act and the Wheeler-Lea bill." [Fisbein]

Author James Norris noted, in the 1890s, it was "Concern that aroused public opinion might harm the entire advertising business led the more reputable advertising agencies to curtail their business with patent medicine firms."