In the late 19th to the early 20th centuries, medical science worked towards ways to cure medical conditions.  In such a climate, constipation was explained as stagnate waste residing in the colon that produced toxins that were absorbed and poisoned the body; this theory of self-poisoning, or the autointoxication theory, was very popular and dates as far back as to the ancient worlds of Egypt and Greece.  Physicians pounced on this theory when it was difficult to diagnose other medical conditions such as headaches, indigestion and more serious conditions related to cancer.

Author Whorton, in his journal article, "Civilization and the Colon: Constipation as “the Disease of Diseases,” published in a 2000 issue of The Western Journal of Medicine, noted, “By the beginning of the 19th century, there was a medical consensus that constipation was the “disease of civilization,” a universal affliction in industrialized societies that engendered the full range of more serious human ailments." [Whorton 424] 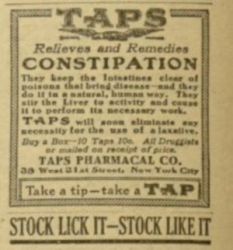 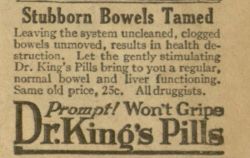