Before the passage of the Pure Food and Drug Act of 1906, many of the advertised cough syrups contained harmful ingredients with an addictive potential like opium. In November, 1899, a cough medicine recipe, appeared in The Bulletin of Pharmacy under the heading "Formulas: Cough Remedies;” the journal noted the recipe resembled the Boschee’s German syrup and called for 4 drachms of a “tincture of opium.” 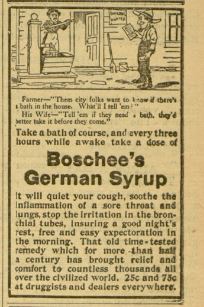 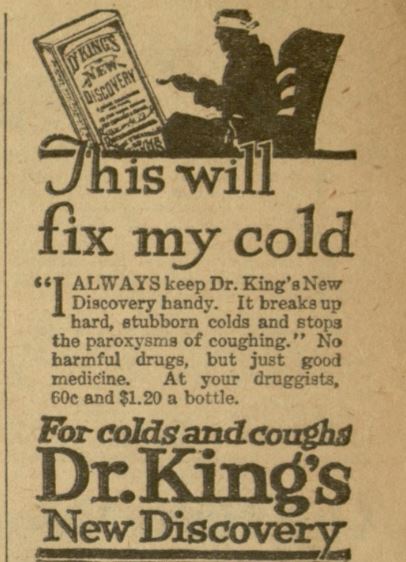 Gray’s departs from this formula in concocting something special for children and the powder is sold to unsuspecting mothers with the active therapeutic agents, Sulphur, licorice and senna greatly reduced in quantity and the sugar content nearly doubled.” [Michigan 24] 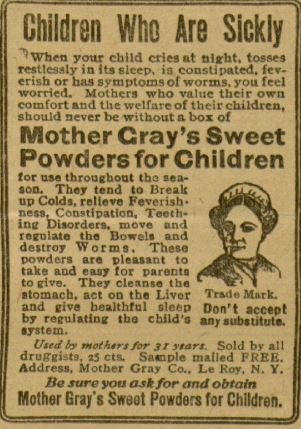 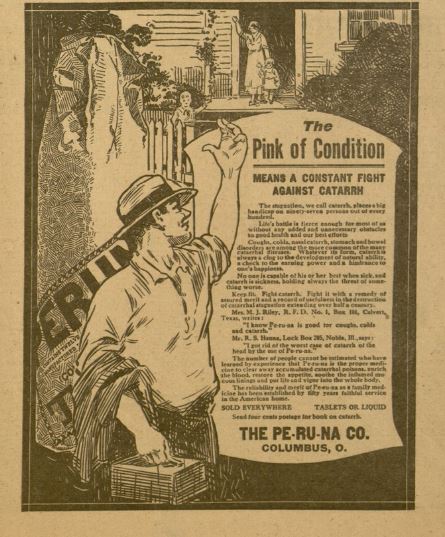 “. . .  PE-RU-NA which was comprised of up to 28% alcohol, water, burnt sugar for coloring and cubeb (a tropical southeast Asian shrubby vine (Piper cubeb) having spicy, berrylike fruits used for flavoring). . . . He hired an individual to travel to places to acquire testimonials from people cured by his tonic and this man later accused the company that the testimonials were forgeries. . . . Hartman’s particular genius was in defining catarrh as the root cause of virtually all known diseases: pneumonia was catarrh of the lungs, as was tuberculosis; canker sores were catarrh of the mouth; appendicitis was catarrh of the appendix; chronic indigestion, catarrh of the stomach; nephritis, catarrh of the kidneys. . . .” written by Maurice Mishkel in the blog, “Samuel B. Hartman MD & The Peruna Drug Mfg. Co., Columbus Ohio.”

The tobacco industry, along with all its accoutrements, and its influence upon America’s social, medical and economic histories was destined with the first harvested tobacco crop. The Second Industrial Revolution brought the invention of the Bonsack cigarette-making machine, in 1884, as well as the changes in curing and varied selections of tobacco produced a palatable cigarette. The industry, with a foothold in the American psyche, and an expanded market promoted advertisements in the weekly and magazines. 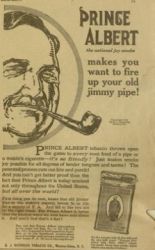 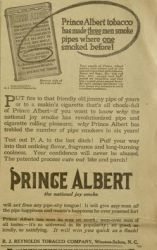 The same weekly newspapers and magazines with cigarette advertisements, in the late 19th to the early 20th centuries, published antismoking advertisements, from a movement comprised of elements from temperance, religious bodies and medical field. Between 1893-1921, succeeded to ban the possession and use of cigarettes in 15 states; however, the ban was later repealed in all the states by 1927. 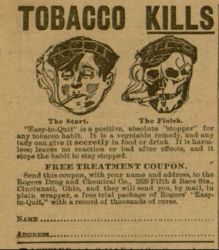 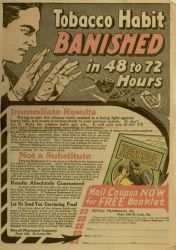 
“Catarrh: medical: a condition in which the nose and air passages become filled with mucus” [Merriam-Webster]

"Hartman’s particular genius was in defining catarrh as the root cause of virtually all known diseases. For Hartman — and his advertising — pneumonia was catarrh of the lungs, so was tuberculosis. . . Peruna, he said [Hartman], would cure them all, even yellow fever, another form of catarrh. The good doctor’s confidence in his product appeared to be boundless." [Sullivan 29]

“In the early to mid-20th century, cigarettes would be produced with medicine in them and given to people with asthma and respiratory issues as a way to get the medicine into their lungs . . ” [Anderson]