If The Playboy is art, to hell with art and those who create it.
--Joseph McGarrity in a letter to Patrick McCartan. April 16, 1912.[1]

On January 26, 1907, the opening performance of J.M. Synge's The Playboy of the Western World at the Abbey Theatre in Dublin was disrupted by hisses, foot stamping and shouting from angry audience members. During the week of performances that followed the disturbances escalated as tin trumpets were blown, fights broke out, police were summoned and protesters were ejected or arrested. Some of the protesters were reacting to the nature of the play's language. A famous telegram from Lady Gregory to W.B. Yeats, who was lecturing in Scotland on the opening night of the play, read: "audience broke up in disorder at the word shift" (a "shift" refers to a women's undergarment and means something like a "slip").[2] Others objected to what they saw as the play's demeaning representation of Irish peasants and Irish rural life. Nationalists accused Synge of conjuring, in what purported to be Ireland's national theater no less, a version of the despised "stage Irishman," a stock character in English drama reaching back at least to the 17th century which promulgates a colonial stereotype of the Irish as "generally garrulous, boastful, unreliable, hard-drinking, belligerent (though cowardly), and chronically impecunious."[3] The nationalist press resounded with outrage and denounced the play as an "unmitigated, protracted libel upon Irish peasant men and, worse still, upon Irish peasant girlhood."[4] The furor came to be known as the "Playboy riots."

Satirical review of the 1907 Abbey Theatre production of J.M. Synge's The Playboy of the Western World, in The Lepracaun: Cartoon Monthly, vol. II, no. 22 (February 1907).  [Digital Library]

In 1911 the Abbey Players left Dublin to embark on an American tour, with The Playboy among the repertoire to be performed for American audiences. Despite four years and an Atlantic crossing the play had lost none of its capacity to arouse controversy. Ominous signs pointed toward a hostile reception as many Irish-American groups expressed alarm regarding the potentially harmful effects of The Playboy on the image of the Irish in America. In its organizational organ the Gaelic American, for example, The United Irish Societies of New York called on "those responsible for the presentation of The Playboy to withdraw it;" otherwise steps would be taken to "drive the vile thing from the stage."[5] After performances in Boston, Chicago and New York, that were sometimes raucous but generally without serious incident, the company arrived in Philadelphia in January 1912. From its first performance at the Adelphi Theater on January 15, The Playboy was greeted by audience disturbances. Arthur Sinclair, one of the players, particularly remembered having to dodge potatoes and eggs thrown at the stage in angry protest on opening night. "That night," he further recalled, "there was a saloon-keeper arrested, as being one of the interrupters. He it was who afterwards prosecuted us for staging an immoral play."[6] 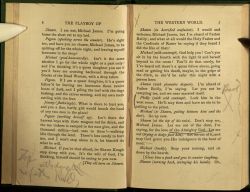 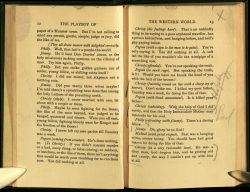 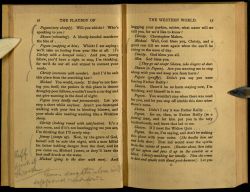 Indeed the players were dragged into court to answer charges brought under the McNichols Act of 1911 which prohibited public performances that were "lascivious, obscene, indecent sacrilegious or immoral." In her book Our Irish Theatre, Lady Gregory, the co-founder of the Abbey Theater who was travelling with the company, describes the scene in the courtroom:

Yesterday, Friday morning, we attended the Magistrate's Court at nine o'clock. We had to wait nearly an hour in a tiny, stuffy room. When the hearing began, I was given a chair behind the Magistrate, but the others had either to sit at the back of the inner room, where they could not see or hear, or stand as they did for over an hour. The liquor-seller, our prosecutor, was the first witness. He had stayed only till Shawneen's 'coat of a Christian man' was left in Michael James's hands. He made a disturbance then and was turned out, but was able to find as much indecency even in that conversation as would demoralise a monastery. His brother, a priest, had stayed all through, and found we had committed every sin mentioned in the Act. [7]

The man Sinclair describes as a "saloon-keeper" and Lady Gregory as a "liquor-seller," the man who had been among the first to interrupt the play and who had caused the Irish players to be arrested, was Joseph McGarrity.

While from a contemporary perspective McGarrity's actions may appear narrow-minded and priggish, the Playboy incident does serve to highlight McGarrity's position along one of the primary fault lines traversing the Irish cultural nationalism of the period. A tension existed between nationalist intellectuals like W.B. Yeats who emphasized the importance of an Irish cultural and literary movement focused on aesthetic rather than political values as a means of liberating the Irish imagination from English domination; and more militant nationalists who viewed cultural revival as desirable but secondary to the ultimate political goal of Irish independence. While Synge may have offered The Playboy of the Western World as a celebration of the Rabelaisian vitality and exuberance of the Irish in an increasingly bland modern world, many Irish nationalists, made sensitive by a long history of colonial ridicule, perceived condescension. Indeed, the fact that many of the leading figures associated with the National Theatre—particularly Yeats, Lady Gregory and Synge—had Anglo-Irish Protestant roots did arouse the suspiciousness of many Irish Catholic nationalists. That McGarrity shared this suspicion is perhaps confirmed by an unpublished poem entitled "On Verses by Yeats in 'The Smart Set,'" in which he dismisses Yeats as a "Sligo imitator" of Robert Burns who "spends his time in London town/ And draws a pension from the crown."