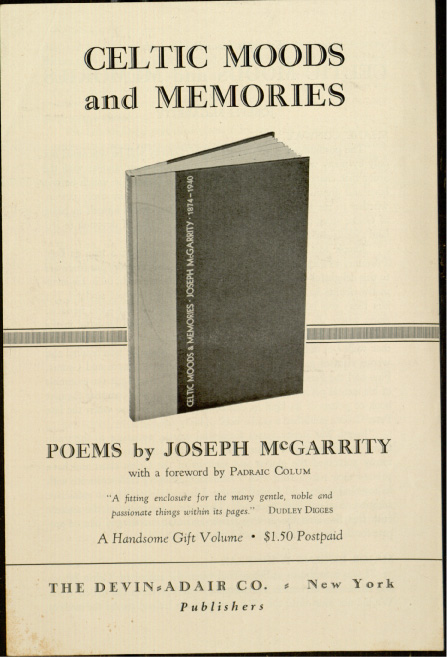 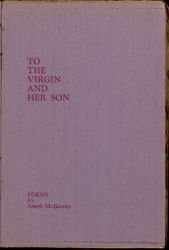 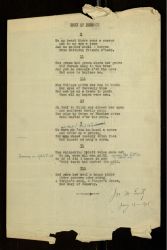 Front cover: To the Virgin and Her Son: poems by Joseph McGarrity (1938). [Special Collections]

I am letting most of the poems go as originally written, which I suppose will bring down the critics on my head, however I did not write them for the critics and I know many real lovers of Ireland who will read them with zest.

During his lifetime Joseph McGarrity published three volumes of poetry. His first, The Way of Life: A Celtic Rubaiyat, was produced as a limited edition chapbook in 1934 by a small private New Mexico publishing outfit called The Laughing Horse Press. To the Virgin and Her Son: Poems by Joseph McGarrity, also a limited edition chapbook, was printed in 1938 by The Halcyon Press. That same year saw the publication of Celtic Moods and Memories by the Dublin based Talbot Press. This volume, which stands as McGarrity's only major published work, contains an extensive selection of McGarrity's poems representing decades of writing verse and is forwarded by the Irish poet and mythologist Ella Young. A second version of Celtic Moods and Memories, published by The Devin-Adair Company in 1942, appeared two years after McGarrity's death. It contains a slimmer selection and different arrangement of McGarrity's poems, and includes a forward by the Irish writer and folklorist Padraic Colum.

McGarrity, as Colum affirms in his forward to Celtic Moods and Memories, was committed to his poetry and would often write late into the night after he had finished with the day's political and business obligations. Until the last decade of his life poetry was largely a private pursuit for McGarrity, though there were certainly occasions when his poetic inclinations served his political efforts.

Ella Young relates one such instance when in 1922, with Ireland on the verge of Civil War, McGarrity travelled to Dublin to try and mediate between the factional political leaders Michael Collins and Eamon de Valera. Following a four hour meeting with the two men, McGarrity returned to Philadelphia hoping the groundwork had been laid for an agreement that would prevent an armed conflict. As the situation deteriorated and the prospect of Civil War deepened, McGarrity cabled the leaders of both sides with a last appeal for unity in the form of a poem entitled, "To Ireland"—

Stop the discord in its course;

Know ye not the foe was worsted,

Only by united force.

His verse appeal proved unpersuasive, and in the conflict that followed McGarrity would lose close friends and colleagues on both sides.

While Celtic Moods and Memories is full of political commitment and the tumultuous historical events in which he often played a significant role, McGarrity's poetry also addresses more domestic and sentimental themes such as lost love, family, faith and friendship. Poems like "Mary of Pomeroy," "Cherry Blossoms" and particularly "The Fairy Footprint," with its pastoral longing and wistful invocation of Celtic mythology, can seem some distance from the Irish revolutionary politics that consumed so much of McGarrity's prodigious energies:

My mother showed the fairy track

Upon a morn in May to me,

And said that someone she held dear

Was doomed to cross a stormy sea:

A few weeks past I westward went

And left a mother sad and lone

And often in my dreams I see

The fairy footprint on the stone.

McGarrity's poetic sensibility is markedly that of an exile and his thoughts, no matter the direction he launches them, seem to turn inevitably toward Ireland, his memories of it, his longing for it, and his hopes for its independence. "Joseph McGarrity," as Ella Young observed, "has a way of bringing everything back to Ireland."