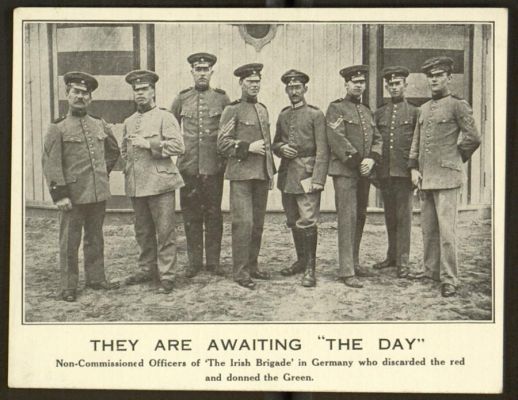 I long for the city

Of the 'Sixteen dead,

And the sacred soil

Where the brave ones bled

Just before noon on Easter Monday 1916, a force of around 1,500 armed Irish republicans seized control of a number of buildings in the heart of Dublin. Standing in front of the General Post Office the commander-in-chief of the rebels, Padraig Pearse, declared the establishment of an independent Republic of Ireland. The insurgents managed to hold off the much larger British military force for nearly a week before finally being compelled to surrender on April 29. Fifteen rebel leaders were executed by the British in the immediate aftermath of what came to be known as the Easter Rising; a total that reached 16 when, in August later that year, Roger Casement was hanged for treason. Casement had been captured by the British a couple of days before the uprising, having returned to Ireland from Berlin by German submarine largely unsuccessful in his mission to raise an “Irish Brigade,” consisting of Irish prisoners of war, and secure German military support for an Irish insurrection.

The Easter Rising proved a seminal event in the history of modern Ireland as the heavy-handed manner in which the British dealt with the rebel leaders led to a resurgence of nationalist sympathies among the Irish public. Many Irish writers and artists felt compelled to address the significance of the Rising, including W.B. Yeats whose poem “Easter 1916,” originally published in Michael Robartes and the Dancer, is far-and-away the most celebrated poetic response to the horrors and heroism associated with that bloody Easter Week. Yeats begins his poem by revealing the nature of his acquaintance with the martyred Irish rebel leaders: 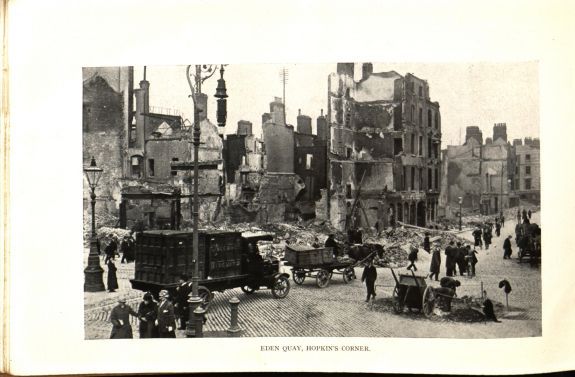 I have met them at close of day

From counter or desk among grey

I have passed with a nod of the head

Or have lingered awhile and said

And thought before I had done

Of a mocking tale or a gibe

To please a companion

Around the fire at the club,

Being certain that they and I

But lived where motely is worn:

A terrible beauty is born.

None of Joseph McGarrity’s many poems concerned with the events and dramatis personae of the Easter Rising achieves the lyrical power of “Easter 1916” or the imaginative purchase of its famous refrain, “A terrible beauty is born.” It could be argued, however, that the poetic perspective McGarrity offers on the Rising holds one notable advantage: his acquaintance with the men of 1916 went well beyond the exchange of “polite meaningless words.”

As a leading member of the Clan-na-Gael, which essentially functioned as the American arm of the Irish Revolutionary Brotherhood (IRB), McGarrity was actively involved in raising funds and arms for the Irish Volunteers, a nationalist military organization formed in 1913 which the IRB was determined to activate as part of their plans to stage an insurrection.  McGarrity’s position as a member of the Clan-na-Gael’s executive body put him in contact with many of the men who would be executed in the wake of the Rising. He was, for example, good friends with both Padraig Pearse and Roger Casement, and had hosted both at his home in Philadelphia. He also knew well the veteran Fenian and chief planner of the Rising, Tom Clarke, who had lived in New York and served as personal secretary to the Clan- na-Gael leader John Devoy.

The Easter Rising was a subject Joseph McGarrity returned to again and again in his poetry. Poems such as “Longing,” “Tell Me,” “Old Days” and “Rory Bold (A Ballad of Roger Casement)” reflect McGarrity’s conviction regarding the significance of the Rising to the cause of Irish independence, and the example he believed it offered of heroic sacrifice; but such poems also register his personal sadness at the loss of friends and comrades. 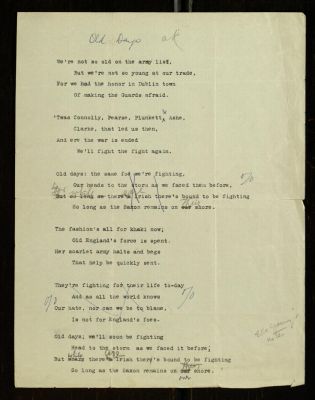 An illustrative example of the oscillation of the personal and the political, of grief and ideology, in McGarrity’s poetic response to the Rising can be found in his poem, “Men of 1916,” published in Celtic Moods and Memories, which begins elegiacally, calling for somber remembrance of the Republican dead:

Now the fight is lost alas!

For gallant men who died so brave

Chant the mournful dirge and Mass

And bear their bodies to the grave.

The poem ends, however, with a call for action and self-sacrifice aimed at the young of Ireland:

Show the world that Britain lies.

Where Yeats’s “Easter 1916” emphasizes the transforming aesthetic potential released by the failed uprising, McGarrity’s “Men of 1916” is an attempt to harness its transforming political potential.  In a speech at the Opera House in Philadelphia soon after the Rising, as British executions of Irish rebel leaders were being reported daily, McGarrity affirmed his belief in the symbolic power of heroic sacrifice to transform a defeat into a kind of political victory: “Every new victim of England’s cowardly panic,” McGarrity assured his audience, “only adds another name to Ireland’s martyrology and supplies a new watchword for the cause for which these men died.”[1]

Indeed until his death in 1940 the events and names associated with the Easter Rising would remain watchwords in McGarrity’s politics and poetry, evoked in veneration and solidarity but also, as in his unpublished poem “Easter Sunday 1936,” to give voice to his frustration at the unfulfilled promise of 1916:

Twenty summers have gone past

Since the nation’s die was cast

To this day many Irish-Americans commemorate the anniversary of the Easter Rising by gathering at Joseph McGarrity’s gravesite in Philadelphia.

[1] Quoted in Marie Veronica Tarpey, The Role of Joseph McGarrity in the Struggle for Irish Independence (New York: Arno Press, 1976), 93.