Drawings for Other Authors

Throughout his career Jack B. Yeats provided illustrations for other authors or gave permission for previously published works to be reprinted. Many of the authors he worked with were active in the Gaelic Revival or were affiliated with the Cuala Press.

In 1905, Jack and John M. Synge spent a month traveling throughout Galway and Mayo documenting the hardship of life in the west of Ireland for The Manchester Guardian. Synge, like Yeats, was Anglo-Irish, critical of British rule in Ireland and sympathetic to the poverty endured by Irish peasants. They became good friends and a few years later Synge asked Jack to provide some drawings for his book on the Aran Islands.

Synge spent a number of summers living on the Aran Islands (located off the coast of County Clare) learning Irish and observing life. Synge gave Yeats the photographs he took of his trips and the illustrations are taken directly from the photographs. Synge was the only author for whom Yeats drew from photographs to illustrate another person’s work.

Yeats drew thirteen black and white line drawings. Similar to Life in the West the illustrations depict typical people and events in their everyday lives. Drawings of the rainy, austere landscape and the long arduous process of making kelp show the islanders struggle for survival. The classic line drawing of An Island Man (shown above) is typical of Yeats' depiction of a strong, rugged peasant, standing proud in his landscape looking off into the distance.

This travel book became one of Synge’s most notable works. Many of the illustrations in this book were later used as the basis for Yeats' oil paintings.

Yeats did not illustrate this book but he gave permission for the author Robert Lynd to reproduce five illustrations in color from A Broadside. An Old Save (September 1911), The Treason Song (June 1910), The Sportsmen (April 1902), and The Ballad Singer (February 1910) are included in this book.

On the cover is The Hurley Player, published in November 1910. The image of a hurler evokes a sense of nationalism. Dating back thousands of years, the sport of hurling was revived as a national past time in 1884 with the foundation of the Gaelic Athletic Association. Their aim was to promote pride in Ireland and being Irish through playing traditional Irish sports such as hurling, handball, and Gaelic football.

The publisher received this text from author Seumas O’Kelly just two weeks before his death. A journalist, editor, and playwright he was a friend of Arthur Griffith and contributed to the Sinn Féin paper Nationality.

Yeats gave permission for the A Broadside illustration to be reproduced in O'Kelly's collection of poetry. The Bard on the Bodach is an Indian ink and wash with Yeats signature in the bottom right. Yeats signed all his works “Jack B Yeats” to distinguish himself from his father who signed his works “J.B. Yeats”.

This book may have been published in 1919 but there is no date printed on this edition. It is the story of a widow who finds love while attempting to find the proper burial site for her husband.

Jack's color frontispiece and eight line illustrations in pen and ink are considered among his best drawings. Some of these illustrations were later used as the basis for oil paintings. They became the last illustrations Yeats would do for ten years.

The color frontispiece shown here depicts two old men searching for the gravesite of the weaver. The twin gravediggers and the widow follow the old men in their search. As with many of Yeats’ works the illustration shows a realistic aspect of poverty in rural Irish life. The grass is long and overgrown in areas and some of the gravestones are toppled or lying haphazardly. The large open sky is typical of the Irish landscape with the lines on the clouds indicating a blustery day.

These oil paintings are typical of Yeats’ strong rugged characters fixed in their landscape, looking into the distance. The painting of the Country Shop Assistants Shop demonstrates the difference in dress and class between a shop girl and the peasant girls outside the door.

Yeats may have been acquainted with Birmingham from his support of the Gaelic League and his association with others in the literary revival. Birmingham whose real name was Canon James Owen Hannay was a nationalist and rector in County Mayo.

The Turf-cutter’s Donkey: an Irish Story of Mystery and Adventure.

Another feature of Yeats early work was children’s books and plays. He wrote several and loved entertaining the local children in Devon with his miniature theatre. Even though he had stopped writing for children Yeats did five watercolor illustrations and eight ink line drawings for this book.

This color illustration resembles a man from Tír na nÓg (Land of Youth) or a member of the Fianna, common characters from the Gaelic legends. The man is tall and strong with long blond hair. His clothes are typical of a Fenian warrior. White space and simple black lines are used to show the sun shining down on the stranger creating an aurora. The child is barefoot and the cottage has a roof of thatch typical of the countryside. 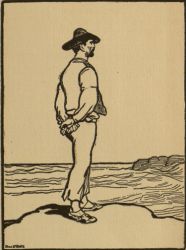 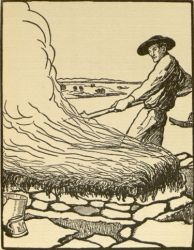 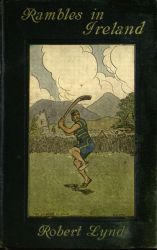 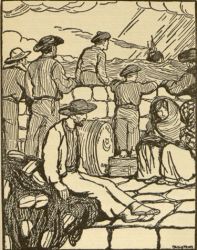 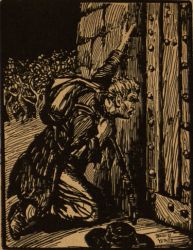 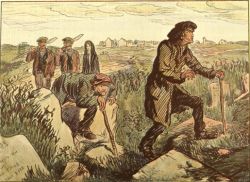 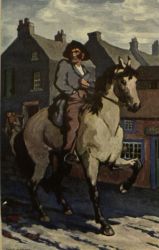 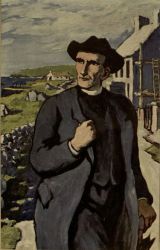 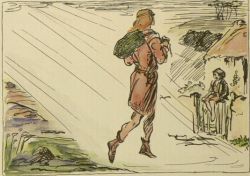 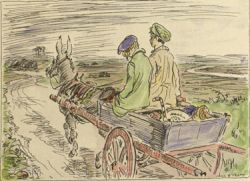 7. The Parish Priest
8. The Farmer

In Birmingham, G. A. (1913). Irishmen All: With Twelve Colour Illustrations by Jack B. Yeats. New York: The Frederick A. Stokes Company. Special Collections: McGarrity Collection
Learn more about Irishmen All.

9. Frontispiece
10. Seumas saw a strange man coming across the bog