A three series publication, the first was published monthly from 1908-1915. The publication was a family affair. Jack's sisters' Lily and Lolly managed the printing and publishing, Jack illustrated and had sole editorial responsibility for the first series, and WB acted as editor in the second and third series.

On display here are issues from the first series. Each edition of A Broadside had 300 copies and an annual subscription cost 12 shillings. Jack illustrated the complete first series (84 issues) totaling 252 drawings.

A Broadside was published in a folio format, on special paper made at the Saggart Mills in Dublin. Lily selected the Caslon 14pt typeface that was used in all works published at Cuala including A Broadside. The printing was done on an Albion hand press built in 1853.

Each issue followed the same format with three illustrations, one on each page, two of which were usually hand-colored, either by Jack or staff at the press. The front page usually had a drop title heading and the issue would contain a mix of traditional and contemporary poems and ballads. While the Cuala Press was devoted to Irish material they sometimes used non-Irish writers.

Many of Jack’s drawings from A Broadside were made into prints, hand-colored and sold separately. They were also used on notecards and Christmas cards. Motifs common throughout Jack’s career can be seen in A Broadside: pirates, circus, traveling, horses, and country life events.

In addition to illustrating this issue Jack provided some of the content. Jack wrote poems for A Broadside under the names WT (Wolfe Tone) McGowan and RE (Robert Emmet) McGowan. Wolfe Tone and Robert Emmet were both United Irishman and Trinity College educated. After Wolfe Tone’s insurrection in 1798 failed Robert Emmet was one of the leaders who emerged to take up the cause.

Lament For The Death of Owen Roe O'Neil

Jack originally completed this illustration in pen, ink and watercolor. It was reproduced for A Broadside and was printed in Rambles in Ireland and A Little Book of Drawings. The Lament for Owen Roe O'Neil was a popular ballad about the death of a general who fought for Catholic rights in the 1640's. Jack's illustration depicts a woman singing the song outside a horse racing festival. Jack often attended horse races and illustrations involving horses and races are found frequently in his work.

The Gara River in Napoleon Buonaparte's Farewell to Paris

Jack wrote the poem under the name Wolfe T. MacGowan and did the illustration for the Gara River. The poem is named after the River Gara located in Devon. When Jack lived in Devon he would construct toy ships and sail them on the Gara stream near their house. Ship illustrations, a common motif in Jacks' work, also appear in Jack’s children’s book A Little Fleet.

I Shall Not Die for Thee

The character in this illustration is typical of Jack's because he looking forlornly out the window. Many of Jack's characters appear to gaze off into the distance. Douglas Hyde translated the poem from Irish. It originally appeared in his collection titled, The Love Songs of Connacht (visit Gaelic Revival to learn more about Hyde).

Throughout Irish history Ireland is often personified as a woman in songs, poems and other literature. When Ireland is referred to as Kathleen Ní Houlihan, she is typically written as an old woman calling to the young men of Ireland to fight for her and free her from English rule. Here Jack draws a man reading the poem to a child instead of depicting the figure of Kathleen. Another name used to refer to Ireland is Róisín Dubh, written in English as Little Black Rose or Dark Rosaleen. Poems with various rose references also appear in A Broadside. View the complete A Broadside collection.

This blue slipcase was used to hold 28 issues or three years of A Broadside. The Irish linen portfolio has a hand-colored label measuring 2 ¾ x 2 ¼ in. Jack B. Yeats drew the design of a pirate with a mandolin. Pirates were a favorite motif of Jack’s and were frequently used in his children’s works and A Broadside. 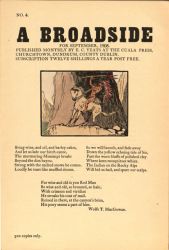 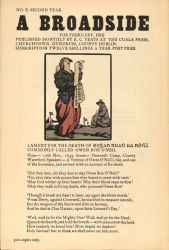 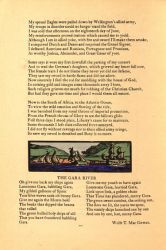 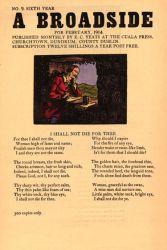 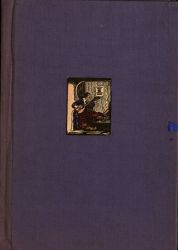 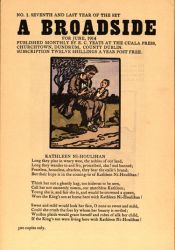 Yeats, J. B.  A Broadside for... Dublin: The Cuala Press, 1908-1915. Special Collections: McGarrity Collection
View the complete A Broadside collection.