Frank Gallagher’s correspondence with John O’Neill ended when Gallagher made a suggestion that the President should consult the Fenian Senate and Brotherhood as a whole about his plans.  During the previous two years O’Neill’s messages to Gallagher gave the impression that he believed his subordinate was willing and loyal to his cause.  What changed the men’s correspondence was a series of communications between Gallagher and various members of the Brotherhood who all expressed their concerns about O’Neill’s agenda and their hopefulness that Gallagher, being a person that O’Neill respected, could help dissuade the leader.  These letters of warning and urgency to Gallagher from various Fenians did not stop when O'Neill ceased to find him useful.  Worried by O'Neill's escalating plans and distance from any opposition, senators and Fenians alike continued to send Gallagher words of warning and concern throughout the early months of 1870.

James Osborne, a Fenian operating within the borders of Canada, writes to Frank Gallagher demanding explanations for circulating rumors about O’Neill’s ambitions and use of the treasury: 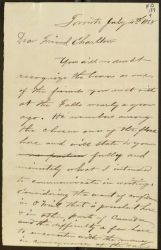 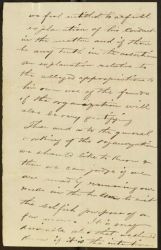 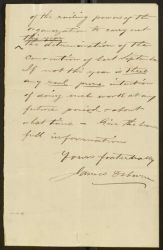 President O’Neill writes his last letter to Frank Gallagher found within the American Catholic Historical Society’s collection in January 1870.  Not only does O’Neill turn down Gallagher’s idea to call a convention for open discussion about money and Fenian issues, but he also writes of money-matters and describes what he calls “economy” as unimportant to the Fenian Brotherhood.

The old plan will cost money undoubtedly but will pay much better in the end.  I have never believed, nor do I now, in what some are pleased to term ‘econemy’ in conducting the affairs of the Brotherhood, too much economy would kill it. 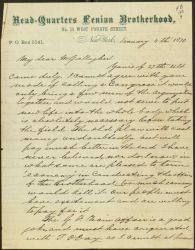 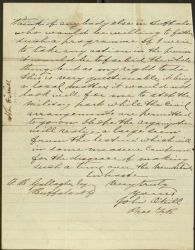 William Dougherty gained his military experience as a lieutenant in the Civil War and as soon as he connected with Gallagher and the Fenian Brotherhood he wrote often with military advice and urgings to codify the widespread Fenian militia and its practices.  On March 3, however, his foremost concern was the attempted assassination of Patrick J. Meehan and what it meant for the Brotherhood.  Referring to the shooting, which occurred three days prior to his penning the letter, he greets Gallagher and immediately says "the deplorable occurrence in N.Y. of Monday night has I presumed suspended present deliberations."

The deliberations Dougherty mentions could reference the difficulties between Fenian Senate and President O'Neill at this time.  Dougherty hints even further that communications between the parties were strained by first saying “I judge so by O'Neills proclamation changing the venue of the next congress” and later wishing that the Fenian Senate would adhere to their previous plans for a convention and not follow O’Neill’s rash changes.  It seems O’Neill used the assassination attempt on Meehan as an excuse to undermine the Fenian Convention already planned and select his own date for a New York City meeting, leaving the Senate offended and intent on keeping their own meeting as planned in Chicago. 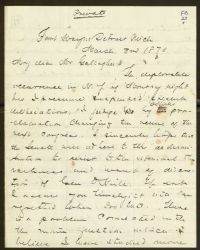 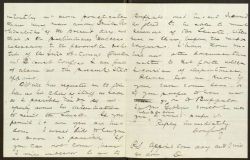 Richard McCloud was a Fenian Senator and named Secretary of the Treasury in August 1869.   On March 17, 1870 President O’Neill released a public circular that stripped McCloud of his position and membership in the organization.  Facing slanderous accusations relating to his defense of the already excommunicated P. J. Meehan in the papers, McCloud explains his own theories as to his expulsion in a circular released on March 30.  He writes about discovering top Fenian officials, including President O'Neill, overdrawing from the Treasury and providing no paperwork to explain the expenses.  When he barred those officials from withdrawing more money and demanded to see their ledgers James Keenan, whom O’Neill had appointed Assistant Treasurer, began to make problems for McCloud and any senator to question the contents of the Fenian Treasury.  McCloud’s circular is blunt in connecting Keenan’s defense of the current state of the Treasury and Keenan’s attack on Meehan on February 28, which apparently occurred mere hours after Keenan less severely chastised and attacked McCloud, himself.

In a letter to Frank Gallagher on March 21st McCloud revisits the connection between O’Neill and the attack on Meehan.  “You will see ere this reaches you of my expulsion for defending the character of Mr. Meehan from his greatest enemy John O’Neill.”  The concerns that McCloud shares in the letter go much farther than the President’s misuse of the treasury.

O’Neill will force a movement upon Canada before the meeting of Congress.  This is believed even by clerks in No. 2, I have not been there since the 18th, yet learn what goes on.  There should be some way to stop him from doing this.  Some means should be adopted of holding the arms out of his reach if it can be done.  A fiasco such as he can only make, will bring the Government down upon us and seize the arms again.  Thus we lose all our property by the vainn glory of this man O’Neill.

McCloud closes the correspondence by pleading with Gallagher “you are in a position to do this thing and should attend to it.” 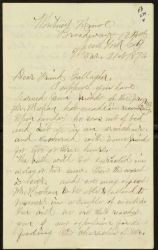 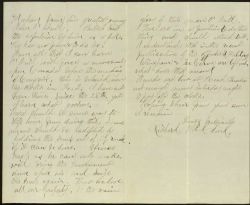 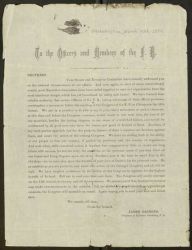 Richard McCloud.  Circular: To the Officers and Members of the F. B.  March 30, 1870.  From Villanova’s Digital Library: Fenian Brotherhood Papers. [Digital Library]

McCloud’s assertion that O’Neill would try to invade Canada before the next Fenian Convention proved true.  A letter written by a distressed Colonel William Clingen of the Fenian Army on April 18 brought to Gallagher’s attention a secret war council O’Neill hosted on April 16.  From this meeting O'Neill intended to immediately march “a crowd of men worked up to a state of frenzy, and clamoring for a fight” straight towards Canada.  Upon learning the state of affairs Clingen and one other officer in attendance convinced O’Neill that the move would have to wait.

Col Lewis and myself protested against this hasty action, and […] to them the madness, and fully of sucha a movement in the face of the preparations that ware now being made by the Canadian Government to receives us, also by this Government to stop us they (the authorities of Washington) had issued orders to several officers along the border to be on the lookout for us, and furthermore that a move with our present force and supplies would bring nothing but ruin, and disaster to our cause, so fully did we demonstrate our arguments that it was decided to postpone the movement for a short time, and allow the congress to assemble in this city. 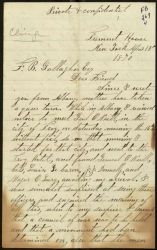 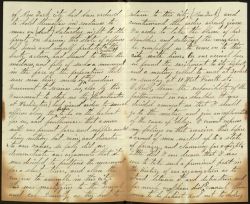 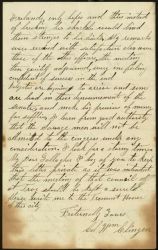 Richard McCloud writes again to Gallagher on April 27th to inform the senator who had remained in Buffalo on the happenings of O’Neill’s Convention in New York City the week before.  “Deni Sullivan and other good men who were in there said it was poorest gathering of Irishmen he ever saw in point of numbers, or intellect.  The riff raff of New York invited everything that brought in.”

McCloud explains that the lack of attendance by any Fenians known to oppose O’Neill and his aggressive course of action allowed for the President to present his plans to a willing audience without any accusatory interruptions.   Instead of addressing concerns that the Fenian Senate had with O’Neill’s leadership, the convention “whitewashed O’Neill, for there was no one to point out the discrepancies in the books.”

McCloud’s letter insinuates that Gallagher would have been allowed into the convention to bring up the controversial issues, but chose not to.  “I expected, and we all expected to see you down last week.  If were possible for you to have come down and got into that Convention, you could have ‘busted,’ the thing.” 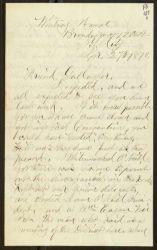 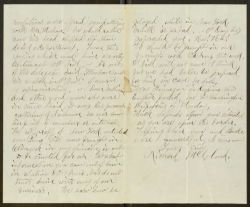 The American Catholic Historical Society’s collection houses mostly letters that Frank Gallagher received.  This makes it difficult to say why he had, at this time, not acted on the urgings of so many of his brothers and attempted to interfere with President O’Neill’s plans.  In writing his next letter to Gallagher, dated May 2, 1870, McCloud does not berate him for staying away from the convention.  He merely writes “perhaps it was just as well you were not in the city during the Congress but you would have had an advantage over Fitz.  You would be permitted to enter the Congress, while he was not.”  Whatever the excuse Frank Gallagher gave it appeased his brothers, but he had neglected to take direct action against the faction of the Fenian Brotherhood it seemed he opposed when he had the opportunity.