In planning his 1870 invasion of Canada John O’Neill hoped once again to gain a footing in the Dominion.  His original plan called for men to advance towards St. Jean and Richmond, which are located down river from Montreal and within reach of important Canadian railways.  O’Neill also planned on organizing simultaneous diversionary attacks.  On May 24th, 1870, the Queen’s Birthday and the day O’Neill had hoped to cross into Canadian territory, he found himself with only a few hundred men which was not nearly enough to carry out his original plan.

After waiting one extra day for delayed troops en route from New York, John O’Neill made the decision to cross with the two hundred men available from Franklin, Vermont into Eccles Hill, Canada.  George Foster, a U. S. Marshall, confronted the group two times before they crossed the line.  In their first encounter Foster informed the men of a new Neutrality Proclamation issued by President Grant which was now circulating two days after its issue.  Less concerned with alienating the Irish vote, the President and other United States politicians were more proactive in 1870 than they had been in 1866 in dealing with Fenian militancy.  The Fenian faction ignored this first warning and advanced towards the boundary where Foster confronted them one more time.  He warned that Canadian riflemen awaited them at Eccles Hill, acting under orders from British and Canadian officials whose informants from within the Fenian Brotherhood provided them with details of the intended attack.

John O’Neill ignored the U. S. Marshall and led his men across the boundary.  The waiting riflemen at Eccles Hill began to fire at the Fenians as they approached.  They immediately killed one man, wounded two others, and sent the remaining men into a frenzied retreat despite O’Neill’s insistence that they stay.  The riflemen, however, endured no harm.  Back on American soil, U. S. Marshall George Foster surprised O’Neill in a carriage as the leader searched for wounded and missing men.  Foster absconded with the leader without any notice from the Fenians currently waiting for new orders.  Without a leader and small in numbers, most of the remaining Fenians abandoned the Canadian invasion and headed home.

Some of those remaining men headed for Malone, where a rumored group of Fenians intended to try once more for a military success.  More Fenian men congregated around Trout River than had fought at Eccles Hill, but as soon as Canadian troops with 1000 men approached the encampment the Fenians scrambled for escape for the last time and all but one unlucky Fenian reached the border and stayed there.

The Fenian Senate and other members who had opposed O’Neill’s Canadian invasion lost no time in responding to the events and attempting to use the failure to unify the organization.  James Gibbons, on behalf of the Executive Council, released a circular on May 28, 1870 that tried to distance the organization from John O’Neill and even the unfortunate raids.

In the meantime, the members of the Fenian Brotherhood should bear in mind that, as the attempt of General O’Neill upon the Canadian territory was undertaken against the authority of the Brotherhood, its failure cannot be recognized as a defeat of the national organization, and that the efforts which England has been compelled to put forth to meet this attack – ill-timed and ill-advised as it was – only showed how much she would have to dread from a combined and well-matured movement of the Irish people under competent Military leaders.  The misconduct of a few irresponsible men may have postponed for a short period the day of Ireland’s deliverance; but a sacred duty of accomplishing that deliverance can never be ignored by our people – it shall not be abandoned even for a day by those who have put their hands to the work; and the events of the past few months prove conclusively that neither knavery nor statescraft can avail to prevent the advent of the glorious day of Irish independence. 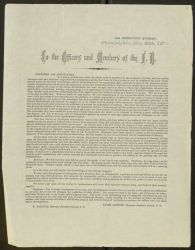 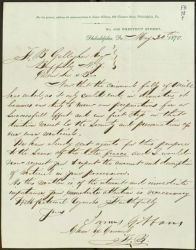 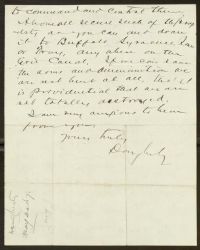 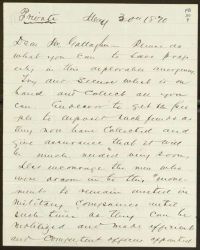 (pictured on top, left to right)

James Gibbons.  Circular: To the Officers and Members of the F.B.  May 28, 1870.  From Villanova’s Digital Library: Fenian Brotherhood Papers.  [Digital Library]

Acting true to their proclamation that the Fenian Brotherhood was still intact and faithful to the Irish cause, the same men who wrote to Frank Gallagher about O’Neill’s foolishness before the May raids now wrote to Frank Gallagher with messages of rehabilitation.  On May 30 James Gibbons penned a letter to Gallagher in which he declared “now that the Criminal folly of O’Neill has ended, as it only could end, in disaster, it becomes our duty to renew our preparations for a successful effort – and our first step in that direction must be the security and preservation of war materials.”  Much of the correspondence Gallagher retained from the months after the May raids centered on the salvation of any materials or funds that could help redeem the organization.  William Dougherty wrote on the same day as Gibbons, “Please do what you can to save property in this deplorable emergency.  Try and secure what is on hand and collect all you can.  Endeavor to get the people to deposit such funds as they now have collected and give assurance that it will be much needed very soon.”   Their former president had all but emptied the treasury in the efforts that led to military embarrassment and the remaining leaders waited to see what response came from the Fenian membership.  Gibbons even expressed concern to Gallagher that a poorly attended emergency meeting of the Fenian Senate would doom the organization.

Knowing you have heard the call for a Meeting of the senate I deem it necessary to ensure you of its importance ruin Disaster and Disgrace is in our path we have fallen on Dangerous ground if there is not a full senate and cool and wise councils prevail, all is lost and our memory will be cursed at home and abroad I have no fear with the proper course persued.

O’Neill mobilizes all his forces

Queen of England's birthday and intended day for crossing into Canada