Sequestered in a Dublin timberyard, James Stephens led the first meeting of the Irish Revolutionary Brotherhood on March 17, 1858.  While the organization’s founding and public leadership originated in Ireland, encouragement came from the Irish-Americans John O’Mahony and Michael Doheny.  After receiving these secret letters of support Stephens established the I.R.B. and installed himself as “Head Centre” of an organization composed of “circles” of followers each with their own secondary hierarchy.   Among other things, the new members swore to “do my utmost, at ever risk, while life lasts, to make Ireland an independent Democratic Republic.” 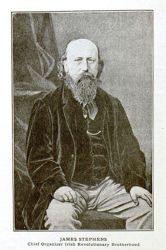 Joseph Denieffe, A Personal Narrative of the Irish Revolutionary Brotherhood: Giving a Faithful Report of the Principal Events from 1885 to 1867, Written, At the Request of Friends, Edited by Stephen J. Richardson, Predentation Ed. (New York: The Gael Pub. Co., 1906), 16.

Already ensured that the United States would aid his cause, Stephens traveled to New York in the fall of 1858.  He personally appealed to the Irish-Americans for money and arms while installing John O’Mahony as “supreme organizer and Director of the Irish Revolutionary Brotherhood in America.”  Encouraged by his inclusion in the I.R.B.’s administration, O’Mahony immediately began using his authority to reshape the American branch of the organization. 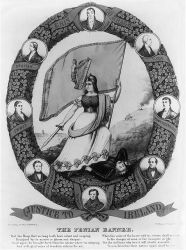 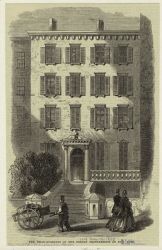 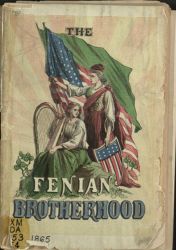 Within a year, O’Mahony set apart his section by renaming it the Fenian Brotherhood.  By taking this name, derived from an early Irish military leader, Finn MacCumhal, and his warriors, the “Fianna Eirionn”, O’Mahony established the American branch as more than just a fundraising contingent of Stephens’ I.R.B.   While Stephens accepted the new title, he still rarely went to the Fenian Brotherhood for matters outside of arms and funds.  O’Mahony may have believed that his proposing the organization and leadership over a large membership entailed him to greater involvement in high administration and policy, but Stephens was uninterested in sharing the leadership of Head Centre.  Years later, in 1864, Stephens voyaged again to the United States in order to assert his authority and remind O’Mahony of the fundraising efforts that should occupy his Fenians.

After some years of semi-secret existence the Fenians decided to make their cause public.  While their penchant for publicity would eventually take a toll on Fenian militancy they began using publications and even advertisements to broadcast their values and secure a following.  The Brotherhood approved of including the Fenian Constitution in varied settings in hopes of getting people to read it.  Printed in The Fenian’s Progress: A Vision, the Preamble, which followed very closely to the United States’ own Preamble, begins:

We, the Fenians of the United States and other portions of America, in order to form a more perfect union, establish justice, insure domestic tranquility, and secure the blessings of liberty for the Irish race in Ireland.

The Fenian's Progress did far more than simply house the Constitution.  It also provides a briefing on the history and theories of the organization and its leaders.  The work's descriptions of idealized Irishmen were meant to both flatter the audience and hopefully persuade them to provide much needed support for the fledgling Fenians:

The love of "home" is deeply implanted in the Irishman's heart.  Wherever he wanders, whatever sky looks down on him, his soul turns with intense longing to his own "loved island of sorrow."  Hence it is that he ever cherishes the hope of seeing his native cot again; and ever dwells with anguish upon the dark and cruel fate of his country.

Give him but half a chance, and he will risk his all to free her from the foul grip of the hate oppressor. 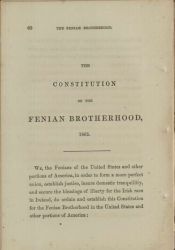 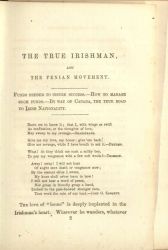 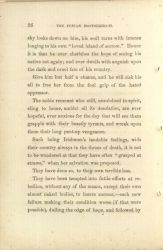 On September 14, 1865 the British Government conducted simultaneous raids on the offices of James Stephens’ newspaper, the Irish People, and an Irish bound ship named Erin’s Hope, which contained ammunition from the Fenian Brotherhood.  Finally armed with enough evidence the government temporarily shut down the I.R.B., called for Stephens’ arrest, and left the Fenian Brotherhood as a dominant voice for Irish nationalism.

James Stephens brings the I.R.B. to America and puts John O’Mahony in charge