Sweeny having made his intentions towards Canada public, much of the British Territory spent the early months of 1866 talking about the imminent danger for the border towns.  The month of March especially worried Canadians because of the circulating rumors that Sweeny would organize his attack around the celebration of St. Patrick’s Day. 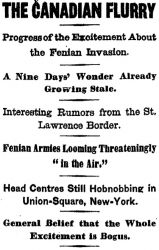 March passed uneventfully for Canada but April brought unexpected visitors.  Bernard D. Killian, John O’Mahony’s loyal treasurer, had spent time convincing the disputed president that military success was the only guaranteed way to reclaim his authority over the Fenians.  In attempts to win approval for his own Canadian invasion, Killian convinced O’Mahony that if they did not have the United States’ support they at least had their sympathy.  Whether or not Killian believed this himself remains doubtful. The Secretary of State W. H. Seward had sent Killian a letter months earlier that explained any official correspondence with the Fenians, let alone cooperative work, would not be “compatible with the public interest,” and so not possible. 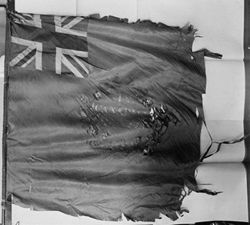 Killian intended to leave from Eastport, Maine and gain control of Campobello Island.  He envisioned Campobello as an excellent base for naval operations in subsequent endeavors against the British.  Killian did bring 400-500 men with him to Eastport, but the rest of his plans went awry.

On April 14, Fenians raided the smaller Indian island near Campobello.  Three days later the Fenians had still not made progress towards their target.  The waiting U.S. Navy had detained all supplies and additional men and by April 17th Civil War hero General George Meade had arrived to represent the United States to both Canadian and Fenian forces.  Meade first met with Canadian officers and made assurances that the Fenians would make no more moves towards Canadian land.  Then he made himself known to Killian’s men.  With no supplies and a strong presence of the United States’ military, any Fenian ground gained was lost.  All men traveled back to their homes, some even on train tickets provided by the United States. 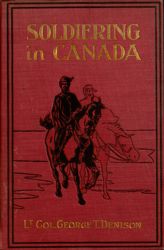 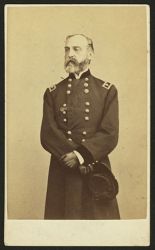 President O’Mahony blamed Killian but lost all of his support.  Hopeful that a military campaign against Canada could work under different leadership and eager to save the name of the Fenian Brotherhood, some of those Irish-Americans flocked to Roberts and Sweeny’s ambitious Canadian plan.  Many believed, like O’Mahony had originally, that any uprising should occur exclusively on Irish soil.  These Fenians remained involved, but without O’Mahony’s leadership they flocked to James Stephens once again.  Stephens, active again after having feared arrest, had planned to visit the United States to fix the schism in the organization.  Instead, arriving in the aftermath of the Campobello affair, he mostly earned support and recognition from the faction supportive of action in Ireland alone.

Fenian supplies aboard the Ocean Spray are detained by the U.S.