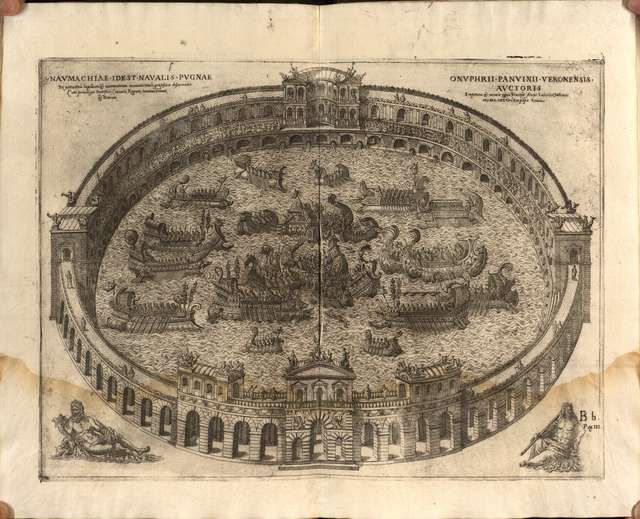 The word naumachia comes from the Greek word that translates literally as “a sea-fight” (Perseus). These sea-fights are often referred to as “mock” battles, but they were anything but fake (Poynton 84). The dangers were very real for those involved, especially because they were often convicted felons or prisoners of war (Coleman 67). Most naumachia were presented in a natural body of water, a basin dug particularly for the naumachia, or an amphitheater or circus which had been filled with water (Poynton 84). The purpose of naumachia could range from inaugural ceremonies to a triumph in battle, but they were always put on for some special occasion (Coleman 68).

Many naumachia have been attested to in history, but there are four particular naumachia that are quite famous. The first, which was put on by Augustus, is mentioned in Augustus’ Res Gestae Divi Augusti, or The Deeds of the Divine Augustus. The second, presented by Claudius, naumachia is from C. Suetonius Tranquillus’ De Vita Caesarum, or The Lives of the Twelve Caesars. The third and fourth, given by Nero and Titus respectively, are from Cassius Dio’s Historia Romana, or Roman History (originally written in Greek). The sections in which the references to naumachia are found are the following:

“I gave the people a spectacle of a naval battle, in the place across the Tiber where the grove of the Caesars is now, with the ground excavated in length 1,800 feet, in width 1,200, in which thirty beaked ships, biremes or triremes, but many smaller, fought among themselves; in these ships about 3,000 men fought in addition to the rowers.” (Augustus 23)

“Even when [Claudius] was on the point of letting out the water from Lake Fucinus he gave a sham sea-fight first…At this performance a Sicilian and a Rhodian fleet engaged, each numbering twelve triremes, and the signal was sounded on a horn by a silver Triton, which was raised from the middle of the lake by a mechanical device.” (C. Suetonius Tranquillus, V.21, 6)

“In the course of producing a spectacle at one of the theatres [Nero] suddenly filled the place with sea water so that fishes and sea monsters swam about in it, and he exhibited a naval battle between men representing Persians and Athenians. After this he immediately drew off the water, dried the ground, and once more exhibited contests between land forces, who fought not only in single combat but also in large groups equally matched.” (Cassius Dio, LXI.9, 5)

“As for the men, several fought in single combat and several groups contended together both in infantry and naval battles. For Titus suddenly filled this same theatre with water and brought in horses and bulls and some other domesticated animals that had been taught to behave in the liquid element just as on land. He also brought in people on ships, who engaged in a sea-fight there, impersonating the Corcyreans and Corinthians; and others gave a similar exhibition outside the city in the grove of Gaius and Lucius, a place which Augustus had once excavated for this very purpose…on the third day a naval battle between three thousand men, followed by an infantry battle. The “Athenians” conquered the “Syracusans” (these were the names the combatants used), made a landing on the islet…” (Cassius Dio, LXVI.25, 2-4)

The locations and activities of each naumachia are easily discerned from the above sections within the ancient sources. Augustus had a basin dug specifically for his naumachia, and it is known as a stagnum (Coleman 51). Claudius used a natural lake outside of Rome for his show; the Fucine Lake was going to be drained, so he used the naumachia as a type of commemoration (Coleman 56). Nero filled a theater with water to produce his aquatic spectacle, most likely his own amphitheater (Coleman 56). The location of Titus’ naumachia is assumed to be the Flavian Amphitheater, but this assumption is only plausible before the hypogeum (an area of service passages and niches) was built underneath it (Coleman 58-9). 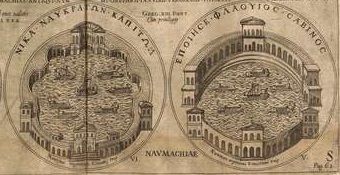 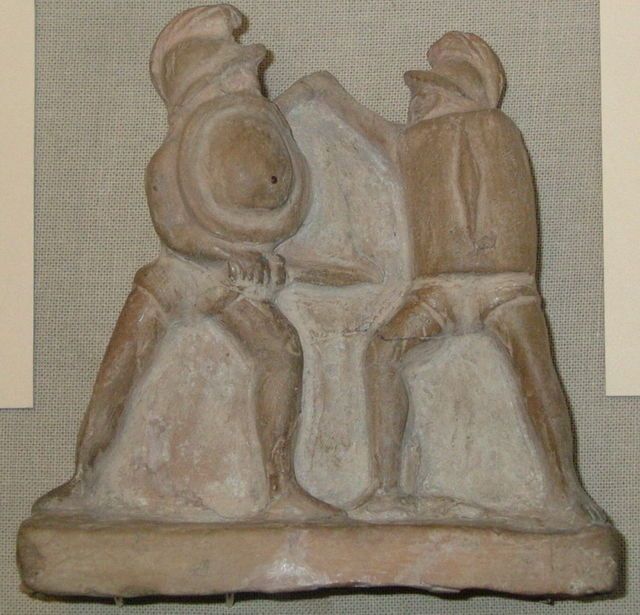 The word gladiator comes from the Latin word that translates literally as “a swordsman, fighter (in the public games), a gladiator” (Perseus). The origin of gladiatorial games was “a form of sacrifice in honour of the dead” (Poynton 81). Gladiators lived in school which was run by a lanista. They were usually slaves, forced by their masters to become a gladiator, or convicts, but free men could also join. If a man survived so many years of performing, he could be released, but slaves and convicts often stayed as trainers (Poynton 82).

There were multiple outcomes for a gladiatorial fight. One gladiator might be killed during the spectacle, but this usually happened only if the show was promoted as munus sine missione. Most of the time, a gladiator on the verge of defeat had the option of surrendering to his opponent. Whoever put on the show was responsible for the future of the surrendering gladiator. Oftentimes, the giver of the spectacle would be lenient because they would receive money back from the lanista for returning uninjured. However, the audience sometimes had differing ideas, and the giver usually accepted the spectators’ wishes. A thumbs up meant death for the gladiator, like plunging a sword through a man. A thumbs down towards the ground meant life. And sometimes a draw would be announced if the gladiators were on an even par with one another (Poynton 83).

Many gladiatorial spectacles have been attested to in history, but there are four particular exhibitions that are associated with the naumachia and venationes previously listed. The first, which was put on by Augustus, is mentioned in Augustus’ Res Gestae Divi Augusti, or The Deeds of the Divine Augustus. The second spectacle, presented by Claudius, is from C. Suetonius Tranquillus’ De Vita Caesarum, or The Lives of the Twelve Caesars. The third and fourth, given by Nero and Titus respectively, are from Cassius Dio’s Historia Romana, or Roman History (originally written in Greek). The sections in which the “Three times I gave shows of gladiators under my name and five times under the name of my sons and grandsons; in these shows 10,000 men fought.” (Augustus 22)

“He gave many gladiatorial shows and in many places: one in yearly celebration of his accession, in the Praetorian Camp without wild beasts and fine equipment, and one in the Saepta of the regular and usual kind; another in the same place not in the regular list, short and lasting but a few days…” (C. Suetonius Tranquillus, V.21, 4)

“On the same occasion thirty members of the equestrian order fought as gladiators.” (Cassius Dio, LXI.9, 1)

“There, too, on the first day there was a gladiatorial exhibition…” (Cassius Dio, LXVI.25, 3)

In addition to the sources from ancient times, there are also plenty ofsources of gladiators in today’s pop culture. One example is the movie Gladiator, a film from 2000. First, you get a glimpse of a gladiatorial school run by Proximo, the lanista. He also bought exotic animals – perhaps for a venatio? There are five fight scenes in the movie. The first fight features some gladiators who came close to the real types. There was one man who may have been a Murmillo or a Hoplomachus. There was also a team of Retiarii – one used a net and a short sword, and the other used a trident and had rectangular plate tied to his shoulder for protection. Neither one was a complete Retiarius, though. The second fight showed all of the gladiators with rounded shields and helmets, which is not realistic. The third fight features Maximus and each of the slaves attired like a Secutor, but with lances rather than swords. There are also Essedarii, and Maximus jumps onto a horse like an Eques. The emperor declared life with a thumb pointed up, which is the opposite of the actual signal. The fourth fight incorporates the venatio by using tigers on chains in the show, and the emperor again uses the wrong sign, this time declaring death with a thumb pointed down. The final fight is completely unrealistic, regardless of the armor and weapons; the emperor would NEVER have entered the arena against a gladiator! 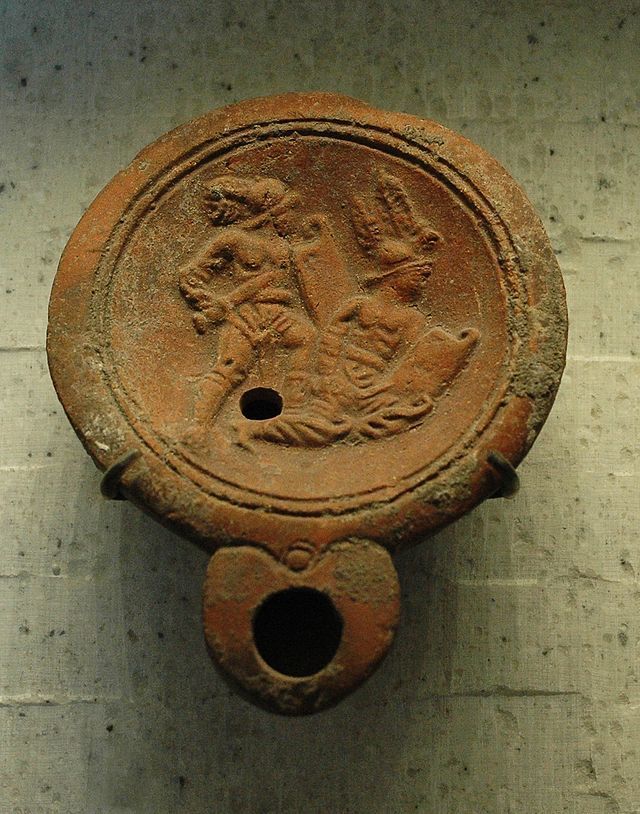 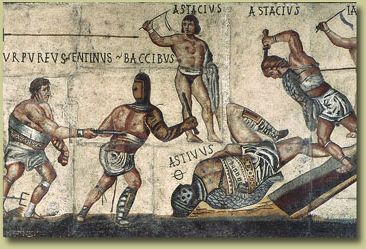 The Gladiator Mosaic, on display at the Galleria Borghese, is one of the earliest known examples of contemporary art with gladiators as subjects.
(2006) Public domain, Wikimedia Commons. http://commons.wikimedia.org/wiki/File:Borghese_gladiator_1_mosaic_dn_r2_c2.jpg 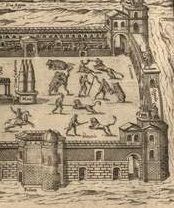 The word venatio comes from the Latin word that translates literally as “hunting, the chase, venery; a hunting spectacle, hunt, battle; or a combat of wild beasts” (Perseus). The interest in venationes did not become prevalent in Rome until the empire expanded outside of Italy to locations where exotic animals were common. The long tradition of putting on hunts saw many different types of animals: lions, panthers, bears, elephants, crocodiles, hippopotami, rhinoceroses, and giraffes, to name a few. These animals were often obtained by the acquaintances of those who were putting on the spectacles (Poynton 84). During the Roman imperial period, when the exhibitions were under imperial control, the military began to have a part in the procurement and transport of the animals (Epplett 211). There is some evidence that certain soldiers were delegated to particular kinds of hunting (Epplett 214).

Before the actually hunts, the animals were usually exhibited first in a circus or the Forum. The creation of lasting amphitheaters, however, allowed for the animals to be kept in cells beneath the building for the time leading up to the venationes. Once released for the spectacle, the only things that kept the animals from running amongst the audience were nets along the walls of the arena (Poynton 84). The animals brought for the spectacles were seldom only for show; the Roman spectators had a preference for blood and gore, which is also apparent in their enjoyment of the naumachia and the gladiatorial shows. There were three types of venationes: one animal or a group of animals against one or more huntsmen, who were armed; one animal or group of animals against another animal or group of animals; and a weaponless convict against an animal or animals, often lions or bears. There is another type of venatio that doesn’t fit wholly into any of the three categories – two animals were tied together, and after attacking one another, huntsmen would intervene and kill them (Poynton 85).

Many venationes have been attested to in history, but there are four particular venationes that are well-known. They are all associated with the naumachia previously listed. The first, which was put on by Augustus, is mentioned in Augustus’ Res Gestae Divi Augusti, or The Deeds of the Divine Augustus. The second venatio, presented by Claudius, is from C. Suetonius Tranquillus’ De Vita Caesarum, or The Lives of the Twelve Caesars. The third and fourth, given by Nero and Titus respectively, are from Cassius Dio’s Historia Romana, or Roman History (originally written in Greek). The sections in which the references to venationes are found are the following:

“Twenty-six times, under my name or that of my sons and grandsons, I gave the people hunts of African beasts in the circus, in the open, or in the amphitheater; in them about 3,500 beasts were killed.” (Augustus 22)

“In addition to the chariot races he exhibited the game called Troy and also panthers, which were hunted down by a squadron of the praetorian cavalry under the lead of the tribunes and the prefect himself; likewise Thessalian horsemen, who drive wild bulls all over the arena, leaping upon them when they are tired out and throwing them to the ground by the horns.” (C. Suetonius Tranquillus, V.21, 3)

“At one spectacle men on horseback overcame bulls while riding along beside them, and the knights who served as Nero’s bodyguard brought down with their javelins four hundred bears and three hundred lions.” (Cassius Dion, LXI.9, 1)

“There was a battle between cranes and also between four elephants; animals both tame and wild were slain to a number of nine thousand.” (Cassius Dio, LXVI.25, 1) 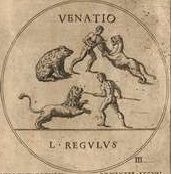