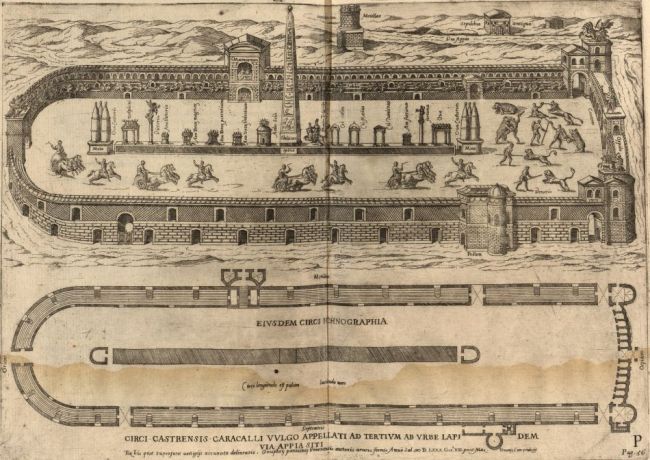 Reconstruction and plan of Circus of Maxentius
by Onofrio Panvinio via Villanova Digital Library - http://digital.library.villanova.edu/Item/vudl:75216

The Circus of Maxentius is located on the outskirts of Rome, between the second and third milestones on the Via Appia.  It was built by the emperor Maxentius during his brief reign (306-312).  However, as Onofrio Panvinio notes in De Ludis Circensibus (1600), it was commonly called the Circus of Caracalla.  This was due to the fact that coins of Caracalla were discovered, minted with a similar looking circus.  Panvinio recognized that this was a misnomer, but offers no alternate suggestion for whose circus it was.  Instead, he names it the Circus of Saint Sebastian, due to its proximity to the catacombs of Saint Sebastian.

It was not until 1825 that the true identification of the circus was achieved, when three inscriptions were found among the remains by Antonio Nibby, two of which mentioned Maxentius as well as his son Romulus, who had been deified following his death in 309. 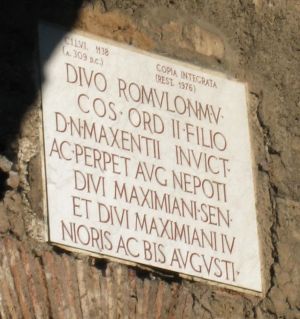 One of the inscriptions found in the Circus of Maxentius, declaring the dedication to the deified Romulus.
Reconstruction. Image used with permission (http://www.romeartlover.it/).

The Circus of Maxentius is one of the largest ancient circuses, measuring 520 meters long by 93 meters wide (at its widest).  The arena of the circus is 503 meters by 72-79 meters.  Neither of the long sides is entirely straight, though the right side angles slightly more than the left.  This may be due to a deliberate choice by the architect to accommodate the course that the chariots would take during the race (Humphrey).  The “kink” is positioned right at the point where the chariots would first be allowed to cut in and the extra room would have helped to decrease the possibilities of accidents at that early of a stage in the race. 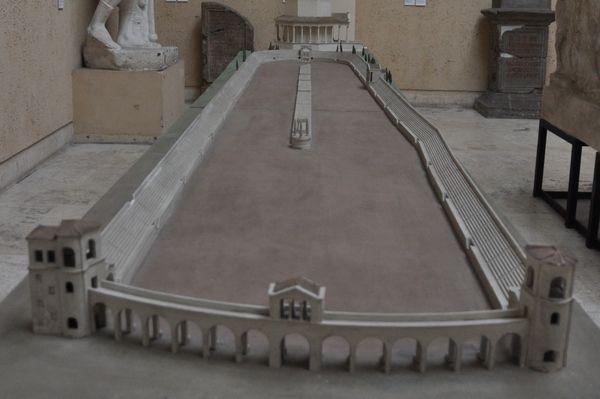 Model of the Circus of Maxentius in the Museo della Civiltà Romana. The slight “kink” in the barrier wall is noticeable.
Photo used with permission of Livius.Org (www.livius.org).

Aerial photo of Circus of Maxentius. The slight “kink” in the outline is noticeable.
Image from Google Maps.

On the west end of the circus, two towers flanked a row of twelve carceres (starting gates) with a larger central arch in the middle.  The towers are still preserved to a height of around 16 meters and included 3 stories.  The interior of the towers likely included stairs to reach the upper levels of seating.  The carceres between the towers have mostly not survived. 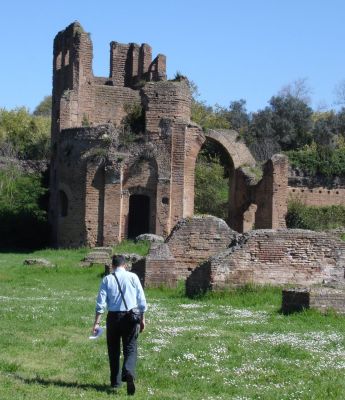 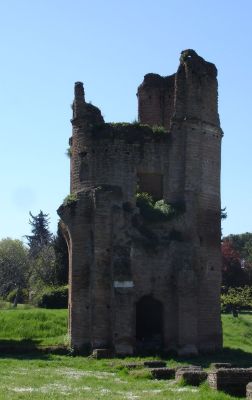 Remains of two towers at west end of Circus of Maxentius.
Photos by page author (April 2006).

The central spina of the Circus of Maxentius was exactly 1000 Roman feet (just under 300 meters) long.  An obelisk with hieroglyphics was found broken in several pieces in the middle of the circus (Panvinio).  This obelisk, a copy of an Egyptian one ordered by the emperor Domitian, was transported to the Circus of Maxentius.  It was later removed by Pope Innocent X and incorporated into the Fountain of the Four Rivers in Piazza Navona, unveiled in 1651. 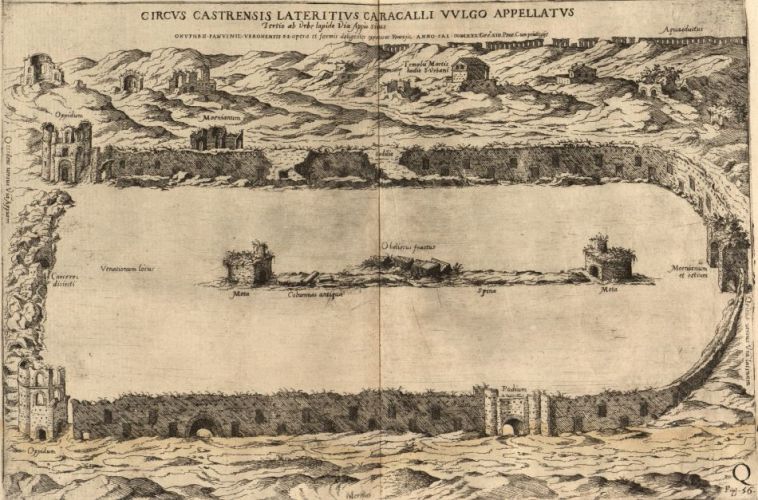 Ruins of Circus of Maxentius. Obeliscus fractus (“broken obelisk”) pictured in the center of the circus arena.
by Onofrio Panvinio via Villanova Digital Library - http://digital.library.villanova.edu/Item/vudl:75216 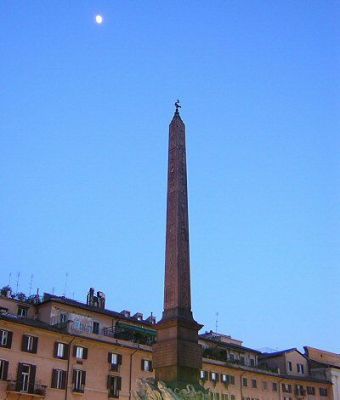 Obelisk from Circus of Maxentius, originally the Obelisk of Domitian, now in Piazza Navona.
Photo used with permission of Livius.Org (www.livius.org).

The seating capacity of the Circus of Maxentius is not definitively known.  The rows are shallower than most other ancient circuses (only about 30 cm deep) and it was suggested by Giovanni Ioppolo that only six of the twelve seating rows were actually used for seating.  Every other row was used as foot rests (Humphrey).  In this reconstruction, the seating capacity for the circus would be around 10,000 spectators.  The building techniques are similar throughout the entire imperial complex, suggesting that it was conceived as one unit and built (likely very swiftly) during Maxentius’ short reign.  One of the interesting techniques used within the circus was the employment of empty pottery vessels to lighten the weight of the cavea (seating area) where the vaulting was thickest (Humphrey). 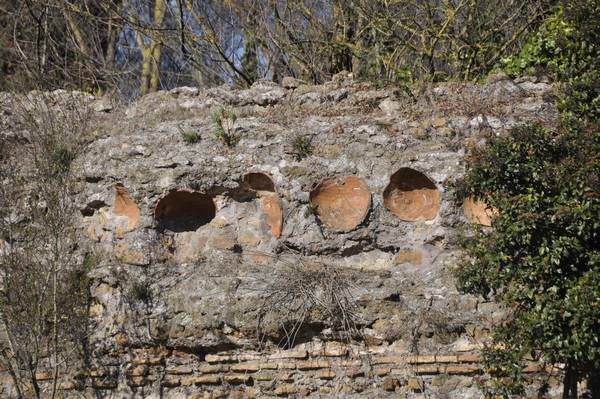 Amphorae used to lighten weight of vaulting in Circus of Maxentius.
Photo used with permission of Livius.Org (www.livius.org).

Although the inscriptions found by Nibby in the Circus of Maxentius (see above) mention that the circus was dedicated to Maxentius’ son, Romulus, who died young and was deified in 309 CE, it is still debated whether the original purpose of the circus was funerary.  Some see it as such, but it is more likely that it was simply part of the larger imperial complex (including a villa and mausoleum) built by Maxentius and only later given a specific funerary emphasis.  It is interesting to note, however, as Lorraine Kerr has, that the nearby Mausoleum of Caecilia Metella is perfectly visible from the imperial viewing box overlooking the circus (Kerr).  This mausoleum was a potent symbol of late republican Rome and its integration into the orientation of the circus was Maxentius’ way of connecting himself and his reign to the illustrious past of Rome (Kerr).  It was only later, with the death of his young son, that the connection to the mausoleum provided further personal significance. 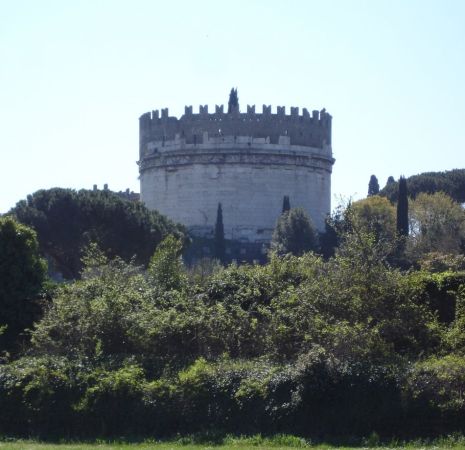 Mausoleum of Caecilia Metella (late republican tomb), as seen from the Circus of Maxentius.
Photo by page author (April 2006).

Kerr, Lorraine. “A Topography of Death: the buildings of the emperor Maxentius on the Via Appia, Rome.” TRAC 2001: Proceedings of the Eleventh Annual Theoretical Roman Archaeology Conference (March 29-31, 2001), 24-33.