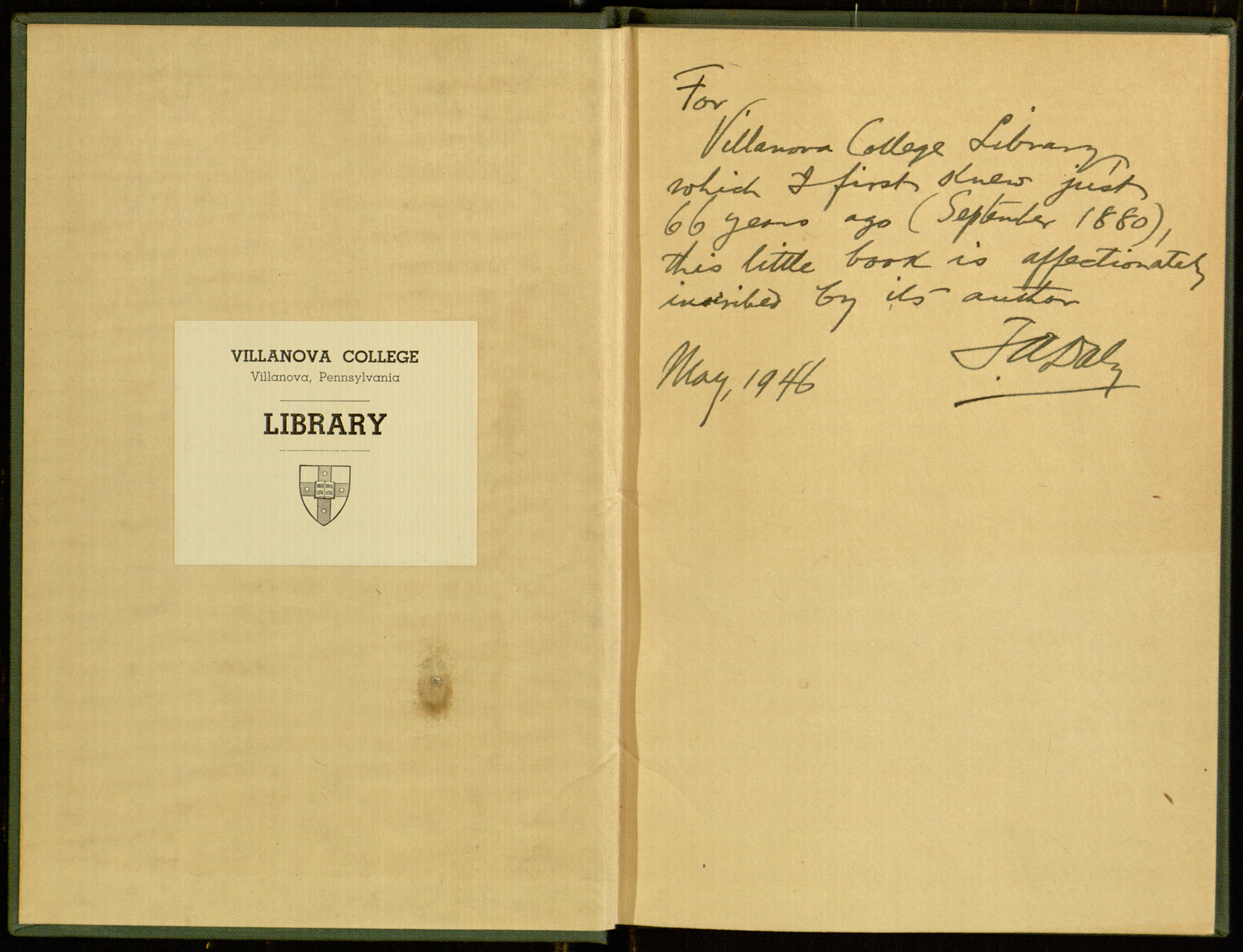 Falvey Memorial Library holds several copies of T. A. Daly's published books in various collections throughout the library. Many editions are signed by the author himself, most of which were donated by Thomas A. Daly, Jr.

For Villanova College Library, which I first knew just 66 years ago (September 1880), this little book is affectionately inscribed by its author

Daly's first publication of collected poems was self-published, printed on the presses of the Catholic Standard and Times newspaper where he worked. Philadelphia-raised artist John Sloan, at the time also employed by the Standard and Times and later renowned as a premier artist of the Ashcan School and The Eight, provided the illustrations. Though Daly's poems in Italian-American and Irish-American dialect had already appeared in print in several newspapers, this was his first publication in book form.

Read Canzoni in the Digital Library.

Daly's second publication largely followed the form of the first. Dedicated to "Herself" (his wife, Mrs. Ann "Nannie" Daly"), it included poems originally printed in the Catholic Standard and Times and several other newspapers. It also reprinted, with slight revisions, ten of the titles previously included in Canzoni. This time the poems are organized under the headings: Italice, Hibernice, Anglice, Songs of the Months, and a single poem under L'envoi.

Read Carmina in the Digital Library.

Madrigali, Daly's third collection of published poems once again illustrated by John Sloan, was dedicated to Brenda, the Daly's sixth child born in 1907.

"The little girl who came into the world at about mid-morning of that lovely Sunday in May was a broken blossom. From the outset it was clear that she would never run about and play or know the ordinary joys of active childhood. It was the first real sorrow that had fallen upon the house, and the iron entered deep into two souls. But Herself — although the burden, as usual, was to weigh most heavily upon her — was never without hope. She selected for the little crumpled bud a quaint, old-fashioned name - Brenda - and for seven years thereafter the child was first in her waking thoughts." (Herself and the Houseful, p.78)

Read Madrigali in the Digital Library.

Signed as "Tom Daly" instead of "T.A. Daly," the author playfully writes in a child's voice about simple, youthful subjects accompanied by colorful illustrated plates. Note the mis-spelled mis-punctuated title.

"These poems are indeed the work of Little Polly. ... Really, all that Mr. Daly claims for himself in this book is the punctuation, which is deserving of special attention. It will be noticd that Little Polly's poems--and the verses are arranged as nearly as possible in the order in which they were produced--show steady improvement. Good work is infectious; and so Mr. Daly's punctuation grows better as the poems improve." (Notice, p. 9)

Dedicated again to his wife, "N.B.D." (Nannie Barrett Daly), these poems are more expressive and personal. Included here is "To a Thrush" which won second prize for The Lyric Year poetry contest in 1912. Daly describes its origins:

"In the May when Brenda was five years old Wister Woods were uncommonly populous with thrushes... he gave himself up to the writing of an ode which had been long taking shape in his mind and heart.
In spite of that most poetic of all world events which happened in the little town of Bethlehem 'in the solemn midnight, centuries ago,' it is a canon of certain squeamish critics that childbirth is not to be mentioned in the presence of maidenly muses.... He realized that what he was moved to write was not likely to be generally approved, but his heart was in it, and when it was finished (barely in time to enter the Contest) he, at least, knew that 'To a Thrush' was a true poem." (Herself and the Houseful, pp. 85-86)

Read Songs of Wedlock in the Digital Library.

Dedicated to the memory of his close friend and fellow poet Joyce Kilmer (1886-1918), McAroni Ballads returns to the familiar formula of humorous dialectic poetry and introduces the character Tony McAroni. Here are also included poems which hint at Daly's Philadelphian influences, "Rubicam Road," the street on which he and his family lived in the Germantown neighborhood, "Along the Wissahickon," and "In Praise of Scrapple."

A brief history of The Society of The Friendly Sons of St. Patrick for the Relief of Emigrants from Ireland. Includes plates, Act of Incorporation and ammendments, and lists of officers and members.

Daly himself was a member, joining in 1906. Daly wrote in its history, the Society "has done its full share in the work of Americanization. Its agent meets all incoming ships and affords necessary relief and welcomes the immigrants to our shores." (p. 23)

Daly was on the stage to recite a poem for The Society's special event in 1926 in celebration of the sesqui-centennial of the Declaration of Independence. The event was held at The Academy of Music and broadcast over the radio.

Read The Friendly Sons of St. Patrick in the Digital Library.

The Wissahickon. [Philadelphia]: The Garden Club of Philadelphia, 1922. Cover artwork by Elizabeth Shippen Green, and drawings by Herbert Pullinger.

"The Garden Club of Philadelphia has had this book compiled to encourage the love and enjoyment of nature and to strengthen and develop the appreciation of this wonderful woodland within our own city, so that many more may have the privilege of knowing the Valley of the Wissahickon and that its charms may then be cherished and conserved." (p. 7)

Read The Wissahickon in the Digital Library.

Herself and the Houseful: Being the Middling-Mirthful Story of a Middle-Class American Family of More Than Middle Size. New York: Harcourt, Brace, 1924.

In this biographical and personal account of family life in their house on the edge of Wister Woods, Daly refers to his wife as "Herself" or the "General Manager" and himself as the "Super." Humorous tales of "the firm's" expansion to eventually include eight children and various household help, detail Daly's career advancement alongside a dedicated family life. True of a typical Philadelphia family, the Dalys summered alternately at the Jersey shore and the Poconos.

Read Herself and the Houseful in the Digital Library.

Dedicated "to all lovers of the laughing muse." Daly has compiled a selection of light verse by American authors ranging from the well-known and enduring Emily Dickinson, Ralph Waldo Emerson, and Henry Wadsworth Longfellow, to his own friends and contemporaries Christopher Morley, Joyce Kilmer, and of course, himself.

Note: Not yet scanned.

The House of Dooner: The Last of the Friendly Inns. Philadelphia, David McKay Co., 1928.

This limited edition of 1000 copies opens with a letter from Christopher Morley to Daly urging him to write “a real whale of a piece” upon the news of the passing of Ed Dooner, and the closing of Dooner's Hotel - "a sort of symbolic provincial Mermaid Tavern" - and a regular meeting place for The Society of the Friendly Sons of St. Patrick for many years. The sentimental history and tribute concludes with a poem, "The Passing of Dooner's."

Read The House of Dooner in the Digital Library.

Another volume of original and collected poems to follow-up McAroni Ballads. The offerings are once again strongly themed around Italian-American, Irish-American, and local communities with titles such as, "Where's Mussolini Gonna Gat?"; "Da Horsa-Race"; "Pennsylvania"; "The Irish Genealogist"; "Chianti, 1920"; and "The Friendly Inns."

Note: Not yet scanned due to copyright restrictions.

"For many decades, ever since the first little edition of Canzoni in 1906, T. A. Daly has been a popular and beloved poet. He is the sort of singer whose verses were made to be quoted, memorized, recited, re-printed, and imitated. "Few writers," says Christopher Morley, "have ever exposed with more winning frankness certain private and household emotions." Late Lark Singing, a collection of verse written during recent years, shows Daly at his best - sensitive, lyric, and witty.

In 1919, T.A. Daly's McAroni Ballads appeared on this firm's first list. Since then thousands of copies of his collected verse, Selected Poems of T.A. Daly, have been sold. Now his latest volume is presented on the auspicious occasion of his golden wedding anniversary."

Note: Not yet scanned due to copyright restrictions.