In addition to T.A. Daly’s college notebooks, Villanova’s Distinctive Collections also holds a scrapbook compiled by Daly early in his career. The first several pages contain clippings of newspaper columns and press, and the check from his first ever speaking engagement with thank-you note signed by Archbishop E.F. Prendergast.

The majority of the scrapbook however - over 40 pages – is filled with reviews of his first book, Canzoni, from newspapers printed across the country.

View the entire Scrapbook in the Digital Library and a few selections below: 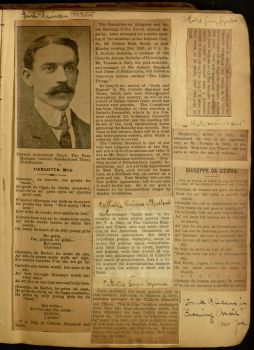 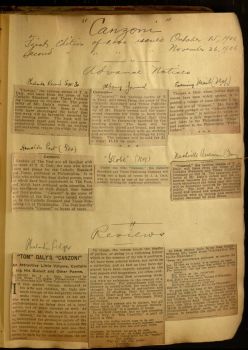 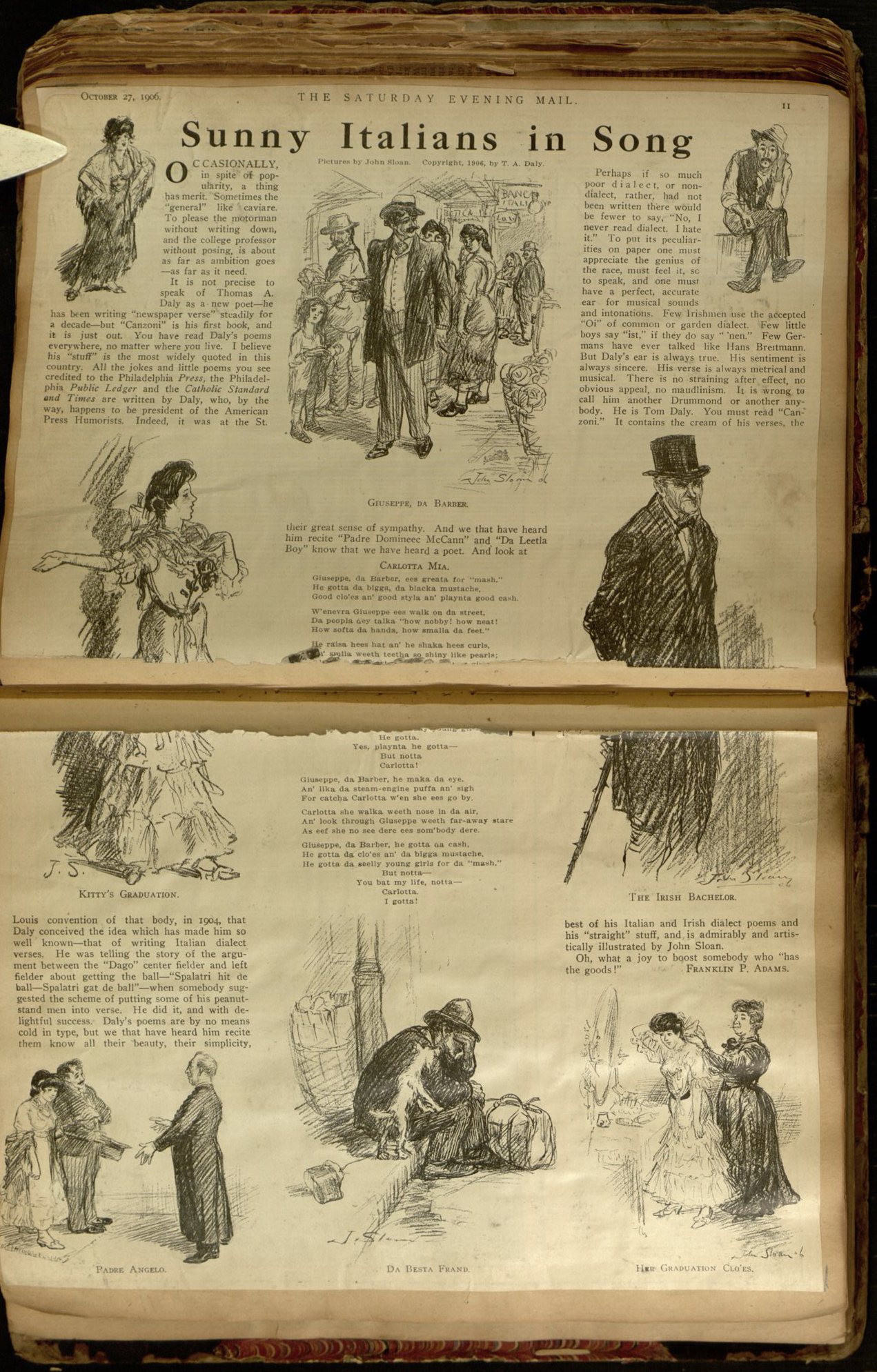 “You have read Daly’s poems everywhere, no matter where you live. I believe his “stuff” is the most widely quoted in this country. All the jokes and little poems you see credited to the Philadelphia Press, the Philadelphia Public Ledger and the Catholic Standard and Times are written by Daly, who by the way, happens to be president of the American Press Humorists.”

“There are few priests who will fail to enjoy these tuneful poetic snatches which are for the most part as the title of the volume suggests, echoes of life among our Italian immigrant brethren. Whilst Mr. Daly’s verses reflect a true realism, they are entirely free from any offensive note which would indicate that the writer’s humor is touched with irony or that it lacks sympathy. Indeed there are healthy lessons contained in most of the poems, and occasional shades of pathos relieve the bright coloring of themes essentially Italian yet encompassed by an atmosphere that reminds one of the mingled smiles and tears of an Irish sky, and inevitably betrays the versatile author’s nationality, even if we did not know his name.”

“Why will Thomas A. Daly occupy a place in American letters when thousands more ambitious poets are forgotten? Because he knows what life is and puts it into his lines; because he knows what the human heart is and is not afraid to let it be found beating in his verse. He sees new things and true things in all the races thronging into our country, and these he shows us, lovingly and sympathetically. He is not a mere humorist, he is a tender interpreter – a new man with a right American message, superior to all race-antagonisms, finding beauty, truth, goodness in the lives, hopes and loves of those about him. A Catholic American poet, he is truly catholic in his sympathies, and his work will endure.”

Other Critical Reviews and Anthologies

While Katharine Tynan, herself a well-known Irish writer and poet, sings the praises of Daly, her review is rooted in racism:

“The Dago is American slang for the Italian immigrant, who is organ-grinder, sells fruit in the street, shines your boots, cuts your hair. … Well, the thing T. A. Daly has done is that he has humanized the Dago, or rather the estimate of the passer-by concerning him. He has got within the skin of the child of Italy, and has revealed him to us as a man and a brother.” (p. 236)

“Daly has a way of his own in portraying character. Each of his poems is an admirable character sketch. His portrayal of the Irish race has come to him by heritage, but his remarkable understanding of the Italian character is not so easily accounted for. He has a way of catching the dialect of souls no less than that of tongues. He is a born poet of the lowly, having captured the spirit of little Italy.” (p. 262)

“Witness how, even in the light verses of Paul Laurence Dunbar and T.A. Daly, there is dignity as well as humor; how in their use of dialect, they have emphasized, paradoxical as it may seem, an American quality – particularly the fusion of native and foreign tongues and temperaments” (p. x)

“Although humorous verse demands an omnibus of its own, its presence must be felt in any collection which presumes to reflect a period of growth. If the full extent of American humorous verse, from wit to burlesque, cannot be shown in this compilation, its changing form is suggested here by the light verse of Bret Harte, Eugene Field, T.A. Daly, Paul Laurence Dunbar, Guy Wetmore Carryl, Franklin P. Adams, Ogden Nash, and (immodest addendum) the editor’s own parodies.” (Foreword, p. vi)

"'Mia Carlotta' and 'Between Two Loves' rank with the best dialect rhyming of the period. Seldom descending to caricature, Daly exhibits the foibles of his characters without exploiting them; even the lightest passages of McAroni Ballads (1919) are done with delicacy and a not too sentimental appreciation. Less popular than [James Whitcomb] Riley or [Paul Laurence] Dunbar, Daly is more skillful and versatile than either; his range and quality are comparable to [Eugene] Field's."  (p. 169)