Ellis Yarnall Dingle was one of five graduates from the Institute for Colored Youth in 1863. Dingle scored 8.07/10 on the final examination which placed him last in his graduating class. While Dingle may have performed poorly on his examination, his short life received high marks.

Dingle was born in Philadelphia around 1839 to Johnson Dingle and Caroline Dingle. Both natives of Delaware, Johnson was a “confectioner” while Caroline was a homemaker. Dingle was an only child and lived at his parents’ home in the 8th Ward of Philadelphia. He entered the Institute for Colored Youth in 1860 and became active in the Mother Bethel A.M.E. Church. Dingle served as a teacher at the Bethel Sabbath School and, along with fellow Institute graduate Sarah "Sallie" L. Daffin (Class of 1860), published an obituary for a Rev. Walter Proctor. In February 1862, Dingle lectured at the Sabbath School which The Christian Recorder described as, “elegant and chaste, and clearly exhibited the fact that he had made great improvement since that time one year ago.” Despite Dingle’s poor showing at his final examination, he did win a prize in 1862 for “diligence” in his studies. Following graduation in 1863, Dingle taught African-American children in Darby, PA. Dingle also served as a member of the executive council for the Frederick Douglass Lyceum, an African-American literary and debate club. Moreover, in an 1865 letter published by The Christian Recorder, Dingle recounted Emancipation anniversary celebrations in Darby, PA. Dingle states that he, “gave a very useful and beneficial discourse concerning the black man…The speaker, during his discourse, was often interrupted by the applause of the audience, and left the platform, much to the dissatisfaction of the eager and appreciative body of hearers.” While Dingle may not have been modest in his abilities, he did serve as head of the Penn Temperance Association which sponsored the festivities.

Sadly, Dingle abruptly died on March 22, 1866 at age 27. He was buried at Olive Cemetery and The Christian Recorder published the following memorial,

'Tis done! and ELLIS DINGLE yields his breath,
But dies in peace, to triumph over death.
That choicest flower of heaven, immortal love,
Just buds on earth, to bloom in worlds above.
He heard, when death triumphant shook his dart,
The dreaded summons with a cheerful heart;
Bade heavenly prospects all around him rise,
And pleasing objects filled his closing eyes.
'Tis next to love to share the tear of wo,-
No other balm relieves the mourner so.
His soul, uplifted on celestial wing,
Hears heaven's high vault with hallelujah ring.
To worlds of blessedness he wends his flight,
And treads th' immortal regions of delight,
A youthful saint, yet God's peculiar care,
Who give thee wisdom, goodness, knowledge rare.
Taught thee through life's perplexing scenes to shine,
And proved by every mark a work divine.
Though left alone, thou on thy God relied,
And, in His boundless love exulting, died.

In addition, at the Institute’s 1867 graduation, a eulogy was read by Dingle’s classmate James LeCount, Jr. (Class of 1863). 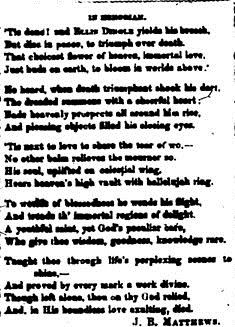