James LeCount, Jr. was one of five students to graduate from the Institute for Colored Youth in May 1863. His overall score on the final examinations was 8.62/10, second only to his younger sister Caroline. Unfortunately, while his sister went on to lead a notable life in the Philadelphia community, records of James are scarce.

James LeCount was born sometime around 1845 to James and Sarah LeCount in Philadelphia. James was a cabinetmaker who also plied his woodworking skills at making coffins and the undertaking business. Like many black families with means in Philadelphia, the LeCounts were most likely involved in the Underground Railroad. According to a family story, one day a LeCount cousin snuck into the coffin room during a game of hide-and-seek. The child found live people in the coffins; slaves James was helping escape. The couple appeared to have four kids: James (c. 1845), Caroline (c. 1847), William (c. 1848), and Ada (c. 1852). William is missing from the 1860 census, but the other three started school at a young age and eventually graduated from the Institute for Colored Youth.

After graduating from the Institute LeCount married a woman named Anna and had two daughters: Ernestine (c. 1866) and Carrine (c. 1868). By 1870 the family had moved to Washington, D.C. While teaching LeCount was attending law school at Howard University.

James LeCount died on July 6, 1878 at the age of 33. By this time he had moved back to Philadelphia, where he was living on Rodman Street in the Seventh Ward and serving as a clerk. He was buried on July 10, 1878 at Lebanon Cemetery. 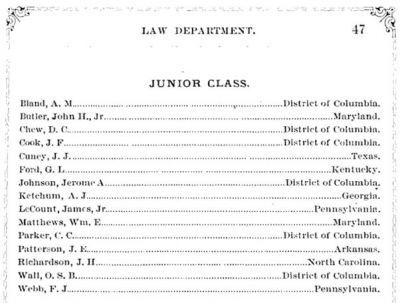