Emerging from school with torch in hand, she did not subdue the flame as many do, but she prepared to carry it long, and keep it bright. --Benjamin Tucker Tanner, "Sallie Daffin," In An Apology for African Methodism, 1867

Sarah L. “Sallie” Daffin was born in 1837 in Spruce Ward, Philadelphia. Her mother, Cecilia was employed as a seamstress, and her work supported Sallie and her older sister, Harriet. Sallie Daffin began school at age 6. She was a devout member of the African Methodist Episcopal (AME) church, which provided Daffin with a supportive and educated community of friends and neighbors. At 20, having already considered becoming a missionary to Africa, she enrolled in the Institute for Colored Youth to receive training as a teacher. She excelled at the Institute as a top student, winning “the first mathematical prize offered to females.” Daffin graduated in 1860, and also won several major literary awards from Philadelphia’s Bethel AME Church for essays on religious themes. Throughout her busy post-graduate year, Daffin continued to represent the Institute for Colored Youth. She was named to the Executive Council for School Alumni. Daffin was a gifted writer and her letters to the editor frequently appeared in The Christian Recorder newspaper during and after the Civil War period.

After her graduation, Daffin’s teaching career mirrored the progression of the Civil War. Following a brief period of teaching in Chester, NJ, the American Missionary Association placed her at a school in Norfolk, Virginia. Her placement coincided with McClellan’s 1862 Peninsula Campaign. She was present in the midst of the conflict and served as a nurse for wounded soldiers. Daffin also cared for soldiers and sailors in North Carolina for the next three years, all while continuing to teach. She wrote eloquently about the Civil War in one of her many Christian Recorder editorials:

The terrible and sanguinary conflict through which our country has so recently passed, has culminated in the birth of a nation from the womb of slavery, oppression and ignorance, into a world of light and liberty.

In 1864, Daffin was named Secretary of the “Ladies’ Soldiers’ Relief Association” of Norfolk, Virginia. From 1868-1869, Daffin taught freedpeople in Tennessee, the school burned down as the result of arson in March 1869. Tennessee was the site of widespread violence against freedpeople following the war. By 1883, Daffin had returned to Washington D.C. to teach. In 1886, she was still residing in Washington D.C. 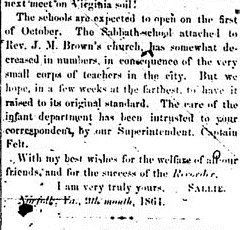