The Pythian Base Ball Club:
Political Activism on the Diamond

During the Civil War era, the men and women who graduated from the Institute for Colored Youth participated in a number of political organizations. This activism was also present in less expected places, like when women attended church. In the case of Octavius Catto and his fellow male graduates, the growing sport of baseball (or "base ball" as it was spelled in the nineteenth century) represented an opportunity to push for equal rights.

Variations of baseball had been growing in popularity in the United States since the early decades of the nineteenth century. In 1833, a group of men in Philadelphia organized a town ball team, the Olympic Ball Club, the first official sports team in the nation. Over the next three decades, the rules of baseball became more standardized, and clubs began forming in cities across the United States. Excluded from the white teams, African American men began forming their own teams in the 1860s. The first African American club in Philadelphia, the Excelsior Base Ball Club, organized in 1866.

Following the Excelsiors, Octavius Catto, Jacob C. White, Jr., and their friends formed their own team, the Pythian Base Ball Club. The team name was a reference to the games in Ancient Greece that predated the Olympics. This was a clear demonstration of the education of the team’s players, which included many graduates of the Institute for Colored Youth. Others were members of the Banneker Institute, the Pennsylvania State Equal Rights League, and other social, political, and intellectual organizations representing Philadelphia’s intellectual elite. These men ran the Pythians like a club, with rules, dues, regular meetings, and committees.

In the Pythians' only home game in the fall of 1866, the team did not get off to a good start, losing to the Albany Bachelor 70-15. But in 1867, their first full year, they made substantial gains in both performance and notoriety. They played ten games and won nine of them. Their only loss came during a home-and-away series with the Washington Mutuals. After losing at home 44-43, the Pythians got their revenge, beating the Mutuals in Washington 50-43 later in the summer. While in D.C. they also played and defeated the Washington Alerts. Pythian games became an important part of life in Philadelphia's African American community, particularly when the team played Washington teams, as these games included picnics and the exchange of gifts. 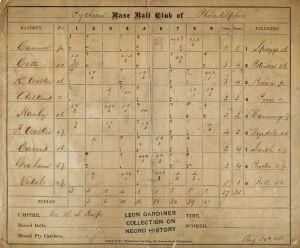 Following the success of the 1867 season, many players considered the Pythians the equal to any team, regardless of race. In October, Catto attempted to place the Pythians on equal footing with other white teams. In an unprecedented move, the Pythian Base Ball Club sought membership in the Pennsylvania state chapter of the National Amateur Association of Base Ball Players.

The Pythians already had a friendly relationship with the Philadelphia Athletics, one of the top white teams in the state. The Athletics allowed the Pythians to use their fields and occasionally provided umpires for their games. The two teams even exchanged notes of congratulations on at least one occasion following a victory. So when the Pennsylvania State Convention of Base Ball Players held their convention in Harrisburg on October 16-17, the Pythians had the support of Hicks Hayhurst, one of the Athletic delegates.

To represent their application to the Convention, the Pythians sent Institute graduate Raymond J. Burr. According to Burr, he met with Hayhurst and other supporters, but they feared that the application would be denied. They advised Burr to withdraw his motion to prevent the official record from showing that the Pythians had been “black balled.” Burr respectfully refused to take their advice.

After a day of deliberation, the committee on credentials approved the applications of 265 out of 266 applying baseball clubs. But in the case of the final club, the Pythians, they refused to vote. Instead, the committee agreed to delay the vote until the evening session and adjourned for a break. During the break, a number of delegates approached Burr and expressed sympathy for the Pythian application. Others, Burr reported, “openly said that they would in justice to the opinions of the clubs they represented be compelled, tho against their personal feelings, to vote against [Pythian] admission.”

Before convening for the evening session, Burr’s supporters recommended again that he withdraw the Pythian application. Burr telegraphed home seeking advice, and the response from his teammates (most likely written by Catto) encouraged him to “fight if there was a chance.” Burr told the delegates that he “did not feel at liberty to [withdraw] whilst there was any hope what ever of admission.” In the end, though, under pressure from opposing delegates, Burr withdrew his application to avoid getting black balled.

In his report to the Pythians, Burr included positive instances of support from Hayhurst and the other delegates. They joined him for dinner and invited him to accompany them to watch a baseball game being played in town. One delegate even bought his train ticket back to Philadelphia. Was this support for the Pythian application genuine and sincere? Burr seemed to think so, for he concluded his report by stating that he could not speak too highly “of the kind attentions which these gentlemen showed him and their expressions of friendship for our club.” But though Burr found individual support among some of the delegates, the decision of the Convention was clear: there was no place for the African American members of the Pythians among the white teams of Pennsylvania.

The Pythians made one last-ditch effort to integrate into the white league. In December 1867, when the National Convention of Base Ball Clubs convened in Philadelphia, Catto applied for membership for the Pythians. But while the outcome was the same, the national association did not treat the Pythians with the same courtesy they had received in Harrisburg. Instead, they voted to reject admission to “any club which may be composed of one or more colored persons,” setting a color-line precedent that would last for decades.

Despite this setback, the Pythians continued to enjoy success on the field. The 1868 roster consisted of four “Nines,” and featured several Institute graduates. Team Captain Octavius V. Catto and Frank J.R. Jones played on the first nine. Raymond J. Burr and Andrew J. Jones played on the second nine. Jacob C. White, Jr., who also served as team secretary and occasional scorekeeper, played on the third nine, as did William T. Jones and Henry Boyer. Jacob White’s brothers Joseph and Martin played on the fourth nine.

In a seven-game 1868 season, the Pythians won six and tied one. As secretary, Jacob White kept records and statistics for the season: 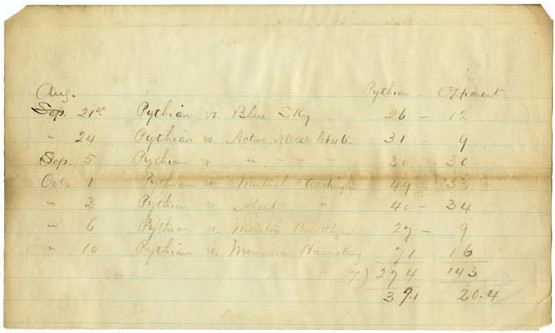 It was not just the players who participated in the success of the Pythians. The skill and dominant performance of the players on the field made Pythian games community events. As in the previous season, the games against the Washington teams elicited particular excitement in 1868. To recognize Pythian wins against both the Mutuals and the Alerts, a Committee of the Ladies of Philadelphia, led by Caroline LeCount, presented two “handsome and costly silk American Flags” to Catto, White, and their teammates. 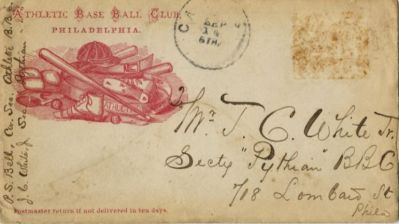 In their 1869 season, just two years after their failed efforts to integrate the league, the Pythians were once again in the forefront of political activism. The team was so good that fans remained hopeful that the Pythians would face a white team on the diamond. Demands for an unofficial, friendly game between the Pythians and one of the city’s white teams appeared in the Philadelphia City Item, a newspaper that regularly covered baseball. The paper was owned by “Colonel” Thomas Fitzgerald, a respected man in the baseball community and former owner of the Philadelphia Athletics.

The city’s white teams were reluctant to accept a challenge from the Pythians, for doing so would be recognizing the equality of black players. And what if the white team lost? Eventually, one team took up the challenge: the Olympics, a ball club that had been playing since before most of the Pythian players were born. The teams agreed to play on Friday, September 3, at Twenty-fifth and Jefferson streets in Philadelphia. The Colonel, who had played such a large role in making the game happen, agreed to be the umpire.

The two teams took the field in front of one of the largest crowds to date for a baseball game. After the first inning, the Pythians had a 3-1 lead. A reporter for the Philadelphia Inquirer commented that at the start of the second inning, the Olympics “saw that they had no easy job before them, and went to work with a will.”

Despite early success, the Pythians struggled to maintain their lead. The team’s ace pitcher was injured. Because there was only one person officiating the game, players called their own outs on bases. And though players were allowed to challenge calls, before the game the Pythians had agreed that they were not going to challenge any calls. Not wanting to challenge the white players, the Pythians’ decision cost them.

In a game that lasted just over three hours, the Olympics proved too much for the Pythians. The Olympics scored 44 runs on 52 hits; the Pythians managed only 23 runs on 30 hits. But the reporter for the Philadelphia Inquirer did begrudgingly admit that the black players “acquitted themselves in a very creditable manner, especially their outfielders, who made several very fine fly catches.” The story of this first interracial game appeared in newspapers across the country.

The game between the Pythians and the Olympics set an important precedent. Many other interracial games followed in other cities, including a Pythian victory against Fitzgerald’s team, the City Items. Interracial games became a regular occurrence. But the color line remained in baseball until 1947, when it was broken by Jackie Robinson, coincidentally a second baseman just like Catto. When black and white men donned the same uniform and entered the field together, they did so as much because of the pioneering work of Institute for Colored Youth graduates as that of the men who followed them. As Octavius Catto, Jacob C. White, Jr, and their teammates had demonstrated in the 1860s, baseball was just politics by another means.

1. Base-ball match between the "Athletics", of Philadelphia, Pa., and the "Atlantics", of Brooklyn, N.Y., played at Philadelphia, October 30, 1865
(Library of Congress)

4. Envelope from the Philadelphia Athletics addressed to Jacob C. White, Jr., Secretary of the Pythians
(Historical Society of Pennsylvania)