Andrew J. Jones was born in 1843 to parents Henry and Margaret Jones. Jones graduated from the class of 1861. Fanny Jackson Coppin’s Reminiscences states that Jones was “several years an editor of the Philadelphia Sentinel [newspaper]”. The newspaper was only in existence from 1870-1873, indicating that Jones did not spend an extended period of time as an editor of the newspaper. It is possible that he and William T. Jones (class of 1860) were related, since William T. Jones was also employed as a "messenger". Andrew J. Jones was listed as a storekeeper in the 1871 Nineteenth Annual Report. Roger Lane’s William Dorsey’s Philadelphia and Ours mentions that Jones became a realtor later in life. Jones died in 1913 at the age of 70. He was still employed as a real estate agent at the time of his death.

Fanny Jackson Coppin, Reminiscences on School Life and Hints on Teaching, Philadelphia, A.M.E. Book Concern, 1913, 161, Docsouth.unc.edu; “Sentinel (Manayunk, Philadelphia) 11/5/1870-10/24/1873”, 3, Free Library Newspapers by City, Freelibrary.org, http://libwww.freelibrary.org/faq/guides/NewspapersbyCity.pdf; Board of Managers of The Institute for Colored Youth, Objects of the Institute for Colored Youth, with a list of the officers and students, and the nineteenth annual report of the Board of Managers, for the year 1871, Philadelphia, 1871; Roger Lane, William Dorsey’s Philadelphia and Ours: On the Past and Future of the Black City in America, New York, Oxford University Press, 1991, 220, 243; "Andrew J. Jones," Pennsylvania (State). Death certificates, 1906–1963. Series 11.90 (1,905 cartons). Records of the Pennsylvania Department of Health, Record Group 11. Pennsylvania Historical and Museum Commission, Harrisburg, Pennsylvania, Ancestry.com. 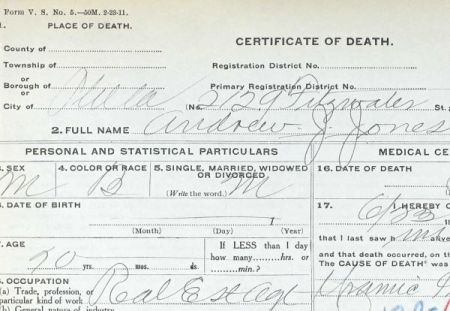