Henry Boyer graduated from the Institute for Colored Youth in 1861. According to the 1862 annual report, Boyer was teaching in New Jersey. He played on the Pythians, but resigned from the team because he was a 'muffin,' a player with little skill. Boyer served as Corresponding Secretary of the Association of Alumni in 1861. In the 1880 census, Henry, now 38 yrs old, was married to Mary (34 years old).  The couple was raising their 10 year old daughter, Ida, and six year old son, Arthur, who were both "at school." Ida and Arthur's sister Mary, was seven months old. Nineteen years after graduating from the ICY, Henry was still teaching.

Objects of the Institute for Colored Youth, with a list of the officers and students, and the annual report of the Board of Managers, for the year 1862, Philadelphia, C. Sherman, Printers, 1862; Daniel R. Biddle and Murray Dubin, Tasting Freedom: Octavius Catto and the Battle for Equality in Civil War America, Philadelphia, 2010, 368; “Notice,” The Christian Recorder, September 28, 1861; 1880 Federal Census, Philadelphia, Philadelphia, Pennsylvania; Roll: 1170; Family History Film: 1255170; Page: 148D; Enumeration District: 125; Image: 0480. 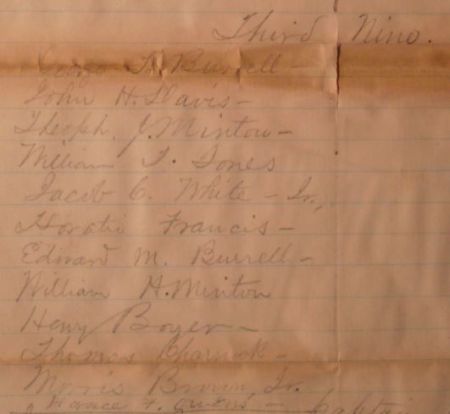