This project is no longer actively updated, external links may be broken.
WWIOnline > Exhibits Home > WWI Online > Articles > Not Waiting for the Call: American Women Physicians and World War I

The modern weapons and tactics of World War I produced unprecedented conflict and carnage in Europe. France suffered the devastating effects of the war being fought on its soil, including a severe humanitarian crisis resulting from the bombardment of villages near the constantly-moving front lines. With the local village doctors away fighting at the front, the rural civilian population--already ailing from malnutrition and disease--were left even more vulnerable to illness and epidemics. Despite the widespread suffering, women physicians were not permitted by the European Allied countries, and later, the United States, to serve as officers in the military medical corps. By 1917 when the U.S. entered the conflict, there was a shortage of workers for all types of jobs related to the war effort, including physicians – domestically and overseas. The need for the nation to mobilize for the war effort, and the growing professionalization of women accelerated the conversation about the role and status of women in the United States, where most were still denied the right to vote. Women doctors eagerly participated in this conversation, as many viewed it as their patriotic duty to use their medical skills during the war, to care for both civilians and soldiers. With so many male doctors called away to combat, it seemed obvious to women physicians like Dr. Frances Van Gasken, Professor of Clinical Medicine at Woman’s Medical College of Pennsylvania, that the United States government would call upon them to fill the need for medical personnel. Dr. Van Gasken, who was known for wearing a “Votes for Women” button while teaching at Woman’s Med, addressed the incoming class in September 1917: “Who is there to fill these places but women? Is it not your day? Does opportunity not call to you?… It seems to me there is no better ‘war bit’ for women to do than... to enroll themselves as students of medicine…”

When the General Medical Board of the Council of National Defense appointed Dr. Rosalie Slaughter Morton, who had studied the wartime Scottish Women’s Hospitals in Europe, to form a committee of women physicians, it seemed inevitable that Uncle Sam would soon call upon the Daughters of Aesculapius* to join their brothers in patriotic service. At their 1918 annual meeting, two years after endorsing suffrage, the Alumnae of Woman’s Med passed a resolution:

That the Alumnae Association of the Woman’s Medical College of Pennsylvania put itself upon record as asking that women physicians be eligible for admission to the Medical Reserve Corps; and, when so admitted, that they receive the rank and pay given to men for equivalent work. [emphasis added]

In April 1917 the U.S. entered the war; in March 1918 the Army Medical Department began allowing women physicians to enlist as contract surgeons —a doctor-for-hire arrangement that provided more doctors, but denied women the military commission offered to their male counterparts. This meant less pay and no commission, and only eleven of the fifty-five women contract surgeons who enlisted were sent “over there” to serve on the front lines. Many women doctors considered this an insult—especially since women nurses had been part of the U.S. Army Nurse Corps and the U.S. Navy Nurse Corps since 1901 and 1908, respectively, and were already deployed overseas. They could see no real reasons why qualified and necessary doctors would be kept out of the military—other than because they were women. Woman’ Med alumna Dr. Caroline M. Purnell, wrote: “...I do not believe for one minute that the law keeps us from the medical reserve corps. The only reason given is that which is no reason—that we are not permitted to be in the corps because we never have been. It is just like voting; the vote is denied because women didn’t used to vote.”

So women physicians took matters into their own hands, forming voluntary organizations and travelling independently to war-torn areas of France to provide sorely needed medical care for the population, alongside other philanthropic organizations like the International Red Cross. Woman’s Med alums who traveled to war zones in Europe included Purnell (WMC 1887), Dr. Rosalie Slaughter Morton (WMC 1897), Dr. Mary E. Lapham (WMC 1900), and Dr. Lillian Stephenson (WMC 1909). Medical women’s groups serving overseas included the American Women’s Hospitals, formed expressly for this purpose; a unit from the Smith College; the Overseas Hospitals of the National Women’s Suffrage Association; and the Hospital Unit of the New York Infirmary for Women and Children. The latter group served under the French flag, with French Commissions, after its services were officially rejected by the U. S. Surgeon General, Dr. William C. Gorgas. (Despite women doctors demonstrating their patriotic loyalty and service, the ultimate goal of securing military commission with rank and pay equal to male doctors remained out of reach. It wasn’t until WWII that Dr. Margaret Craighill, then Dean of WMC, became the first woman commissioned in the United States Army Medical Corps. )

The desire to advance women in the medical profession and to relieve those suffering in wartime conditions prompted American women physicians to establish the first American Women’s Hospital (AWH) in France in 1918. When they arrived in France, the doctors of the AWH found a ravaged countryside and impoverished villagers ailing from longstanding health problems exacerbated by the war. They established their first hospital in July 1918 in Neufmoutiers, a small village about twenty miles southeast of Paris. In September, the hospital was moved to Luzancy, closer to the devastated areas and where the doctors handled dysentery, typhoid, influenza, and pneumonia as well as performing long-overdue surgeries. The doctors of AWH did their medical work under extremely difficult circumstances: scarcity of equipment, improvised spaces, poor transportation, and constant uncertainty and insecurity because the front line of battle was always moving back and forth throughout the countryside. The women physicians were welcomed and appreciated by local villagers, and purposefully cultivated good relations with local French officials, who at times felt threatened by the women’s presence. Dr. Louise Hurell, director of the AWH Hospital stated that “ ...I made my decision and called upon these [French] doctors before they called upon us...a week ago one of those French doctors...had asked...how long those American women were to take the bread out of the French doctors’ mouths. [But] Our mayor told us in emphatic terms that he, the prefect and the people throughout the country knew that if we had not come here when we did the people of this community would be dead and buried…”

Following the armistice of November 11, 1918, local French doctors returned to Luzancy, its surrounding areas and living conditions improved greatly, and the AWH moved their hospital in June of 1919 to Blérancourt, a town about 75 miles north. At Blérancourt, the doctors attended to preventive health care, particularly vaccinations for smallpox and typhoid. This region was just on the edge of the Battle of the Marne, an area that saw a large number of refugees. Director of the AWH hospitals Dr. M. Louise Hurrell's reports describe illness and epidemics compounded by lack of food, fuel and clothing, as well as unsanitary conditions. The pride of the hospitals was its ambulance drivers and surgeons—all women—who served 20,000 patients over the course of a year. The French government honored Dr. Hurrell and other AWH physicians with the Medailles de Reconnaissance, awarded in recognition of those who, without military obligation, had come to the aid of the injured, disabled, and refugees, or who had performed an act of exceptional dedication in the presence of the enemy during the First World War.

The armistice that ended the conflict in Western Europe did nothing to alleviate conditions in the areas that had been devastated by battle. Accordingly, the doctors of AWH believed that the end of war did not mean the end of their services. People who had experienced the deprivations and destruction of war continued to suffer from its effects long after the fighting had ended: local violence, hunger, injuries, communicable diseases, forced migration, and inadequate housing. Dr. Esther Pohl Lovejoy, the chair of AWH, stated that the aftermath of war was in fact “worse than the War in some countries.” As towns and villages were restored with a healthy population, the AWH moved on to assist other needy areas, including Eastern European regions affected by the refugee crises resulting from the break-up of the Ottoman Empire.

War has always upended women’s lives; left at the home front to care for their families and returning soldiers in a society where all of the usual economic and social structures have disappeared. But by the onset of World War I, women were poised to play a more active role than that of the homemaker struggling to hold families and some semblance of civil society together with diminished resources. Women physicians viewed WWI mobilization as an obligation and an opportunity to participate and make change, and to determine their own fate. When the U.S. government failed to tap their skill sets and patriotism, they took the lead and organized themselves as they had in the past for abolition, temperance, slavery, fair labor laws, and other social causes. These women forged ahead into wartime work, providing essential services to devastated populations and preserving communities who would then carry on to re-build after the Armistice. This successful and initially unrecognized effort evidenced women as full participants in American life, and served as the prelude to the ultimate maker of citizenship, suffrage.

*Aesculapius was the god of medicine in ancient Greek mythology 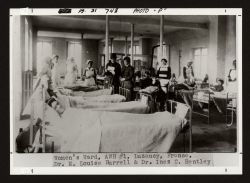 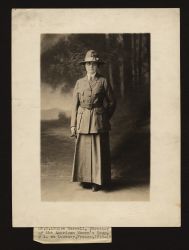 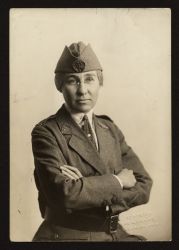 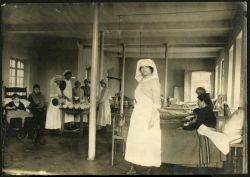 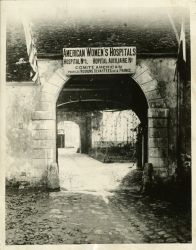 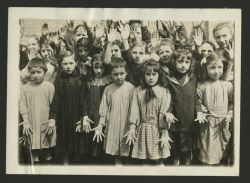 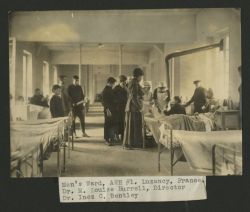 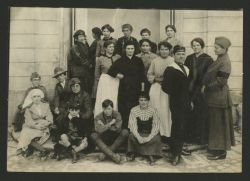 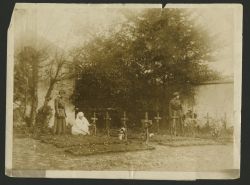 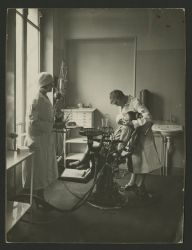 The American Women’s Hospitals in World War I France: "Across Battlefields and into Villages”
http://doctordoctress.org/islandora/object/islandora%3A1868

The American Women’s Hospitals and the Fire of Smyrna: “Millions of refugees, almost totally without men”
http://doctordoctress.org/islandora/object/islandora%3A1492

War has always upended women’s lives; left at the home front to care for their families and returning soldiers in a society where all of the usual economic and social structures have disappeared. But by the onset of World War I, women were poised to play a more active role than that of the homemaker struggling to hold families and some semblance of civil society together with diminished resources.

Prisoners Make Good at the Front

Eastern State Penitentiary—opened in 1829 and closed in 1970—operated throughout nearly every major conflict in modern American history: the Civil War, World Wars I and II, and the Vietnam War. The inmate population mirrored a typical military population—in large part made up of young working class men.

An overview of three girls' series books that had heroines who participated in the war effort at home and abroad.

War has always upended women’s lives; left at the home front to care for their families and returning soldiers in a society where all of the usual economic and social structures have disappeared. But by the onset of World War I, women were poised to play a more active role than that of the homemaker struggling to hold families and some semblance of civil society together with diminished resources.

Prisoners Make Good at the Front

Eastern State Penitentiary—opened in 1829 and closed in 1970—operated throughout nearly every major conflict in modern American history: the Civil War, World Wars I and II, and the Vietnam War. The inmate population mirrored a typical military population—in large part made up of young working class men.

An overview of three girls' series books that had heroines who participated in the war effort at home and abroad.