FALVEY MEMORIAL LIBRARY
Home Search Guides Help
You are exploring:  Library  >
Exhibits Home  >
A Great Thing for our People: The Institute for Colored Youth in the Civil War Era  >
Documents  >
On Negro Delinquent Children of Virginia

On Negro Delinquent Children of Virginia

Mr. John H. Smyth was asked to speak on the negro delinquent children of Virginia.

Mr. J. H. Smyth, ex-United States Minister, and Consul-general to Liberia, W.A. — Mr. President, Ladies and Gentlemen of the Conference, — As I am but a one-thousandth part of the Conference, representing one-ninth of the population of the country, I may content myself to speak from my place on the floor. My purpose is to give you information which you may not have with reference to negro children and youth in Virginia, whence I am.

The need in every Southern State — now that the black race is free, and possessed of citizens’ rights — is a reformatory.

Slavery was most destructive of morals in this, that the parents of negro children were not permitted to exercise parental restraint and control over them. This enforced denial of natural right and guardianship conducive to filial obedience and love was the beginning of the end, — moral wreckage of the young of the race.

The severe discipline of slavery, which made the slaves efficient and valuable as a labor class in the South, had the effect upon negro parentage — free and enfranchised — which caused them to dislike and revolt from the exercise of an exacting discipline over their children born during the last thirty years. This sentiment and unfortunate practice of laxity were born of ignorance. These causes, coupled with the poverty of the natural guardians of negro children, account for the jails and penitentiaries of the South having more negro inmates in them between the ages of seven and twenty years than between the ages of thirty and forty years.

But I am here to speak of Virginia’s needs in particular, to pick the beam out of her eye rather than the mote out of the eye of the South.

Virginia has a population of nearly 1,000,000 whites and 700,000 blacks, with a present penitentiary enrolment of 1,325 negro felons between ten and thirty-five years of age as against 310 white felons above their majority, because there is a reformatory for white boys.

For fourteen years there has been a steady increase of criminality among negroes, — from 210 in the penitentiary in 1882 to 1,325 in 1896-97. These delinquents cost the State in 1896-97 $378,000 for their support. The whites cost $72,000, while the blacks cost $306,000. The cost for negro child and youth vagrants, disorderlies, and misdemeanants, was greatly in excess of this amount, which fell upon one hundred county governments and some six city governments. From all sources of negro taxation, capitation, personal and real property, only $116,000 was received by the State in 1896. So that for every dollar expended for the imprisonment of negroes in the penitentiary, there was necessity for the State to supplement the deficit by two dollars, leaving out of the reckoning commitments to jails of counties and cities of felons.

With a legal machinery which makes it possible for police officers, magistrates, and other court officials to profit by the arrests, trials, and convictions of children and youths of the black race for any and every grade of offence, where and when is criminality among this class to stop?

Worse than this is the fact that a custom as old as the State, of herding men and women, boys and girls, in the same compartments in the jails, Virginia, unconsciously, is graduating — under the common and statute laws, annually — thousands of child and youth criminals of the black race.

There is no middle ground, no house of refuge, correction, or reformatory for the black boy or girl who, from defective and from no training, has taken the first step downward; and, as a consequence, crime is accelerated and increased by law.

The motherhood of the black race in Virginia is being tainted in its childhood by jails and a penitentiary. The boyhood and youths are made criminal by means designed for punishment of wrongdoing, but which are destructive agencies of the morals of a large class of the race.

Through the influence of a few earnest negro men, moved by humane and Christian sentiments, the Negro Reformatory Association of Virginia came into corporate existence June 11, 1897, with a negro board of directors and an advisory board of seven white Virginians, with the purpose of rescuing and reforming this class through a reformatory.

Though there is a reformatory in Virginia for white boys, in the eighth year of its existence, neither a negro child nor youth may enter its portals, though there is not a word or sentence in the charter of the Prison Association of Virginia restricting its beneficence to whites nor prohibitive of its influence to blacks.

We who live in the South know that thirty years are not years enough for a people to outgrow their prejudices of race. We know that time is of the very essence of good relations between different races, and that insistence upon the exercise of rights has often to be postponed until men’s intelligence and humanity are developed to a recognition and accord of them. Virginia is fresher in her prejudices to blacks than the North, the East, and the West.

The State gives the white reformatory, or Prison Association of Virginia, the same compensation for care of the inmates of the reformatory as it gives the superintendent of the State penitentiary for the inmates of that institution, and the same amount the counties give their jailers, — 25 cents a day for the food and $10 a year for the clothing of each inmate. The Prison Association of Virginia would not be a refuge and a reformatory for white boys, had Major Robert Stiles not left his law office and appealed to public charity for the money with which the site was bought, and upon which the buildings are erected, never having received from the State treasury but $22,000 in seven years in aid of the reformatory, aside from the appropriation of 25 cents a day and $10 a year for food and clothing of the inmates.

The Negro Reformatory Association of Virginia has undertaken to purchase a farm of 1,804 acres of ground in the county of Hanover, the erection of dormitories, and two workshops for trades teaching. The cost of the land is $14,432, the cost of the buildings $60,000, making a total of about $75,000.

That the institution shall not be an annual pensioner upon its friends and the public, farming in all its branches, blacksmithing, carpentry, and instruction in the domesticities of the home, are designed to be taught, that the institution from the start shall be self-supporting, with the State’s aid in food and clothing of the inmates.

Virginia, by the ravages of war, was the greatest sufferer of the Confederate States. Every industry was either destroyed or paralyzed. Virginia in three years hence will add 3 per cent. to the interest-bearing obligations of the State, increasing her indebtedness annually for an indefinite time by $180,000.

Virginia is carrying on as good a public-school system for whites and blacks as any other Southern State. Virginia is caring for quite one thousand mentally enfeebled and insane negroes, at an expense of $85,000 annually.

Virginia would gladly support reformatories for both races if the effort were not fraught with the present certainty of bankruptcy, the loss of honor in not meeting her obligations to her creditors.

It would be better to kill the unhappy children of my race than to wreck their souls by herding them in prisons with common and hardened criminals.

Virginia has a loyal white and black citizenship now.

Virginia has always been pre-eminently American. In a nation’s need nothing is more valued than patriotism.

A major-general in the person of Fitz-Hugh Lee, of a line of illustrious American soldiers, is on his way to “the front.”

“Gave their spirits out,
Trusted the end to God,
And on the gory sod
Rolled in triumphant blood”

for the preservation of the integrity of this Union, the glory of Americans, the admiration of Britons, and the envy of Celtic Europe.

The negro race has increased from four to eight millions of souls in thirty years, — 100 per cent.,— and has become an important part of the nation. The race’s moral character is, therefore, a constituent part of the moral character of the nation. The nation cannot with safety be indifferent to the negro in the light of its civilization and Christianity.

Institute graduate John Henry Smythe gave this speech at the 25th Annual National Conference of Charities and Correction, held in New York City from May 18-25, 1898. In his speech, he stressed the need for a reformatory program for African American delinquent children. The lack of one, Smythe claims, has resulted in children being housed with adult prisoners, which only increased their chances of becoming criminals themselves. Smythe also describes the efforts of his organization, the Negro Reformatory Association of Virginia, to establish such a reformatory for children of color. 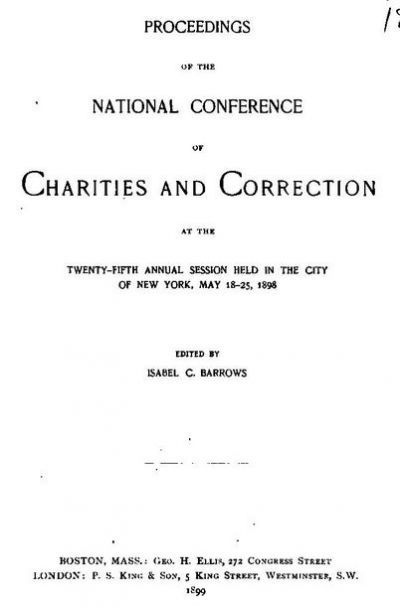