At a special meeting held Jan. 16, 1861, the decease of Mr. Jesse Ewing Glasgow, Jr., was announced, whereupon a committee, consisting of Messrs. O.V. Catto, W.H. Minton and H.B. Black, was appointed to draft resolutions. The following were unanimously adopted.

Whereas, a dearly beloved friend and fellow-member has, through the inscrutable ways of an Overruling Power, been suddenly and unexpectedly torn from us, and whereas, we were attached to him by all the ties formed in a long and friendly association, therefore, be it

Resolved, That we consider the demise of Jesse Ewing Glasgow, Jr., a great affliction; an irreparable loss to the community, to this Institute, and to us as individuals.

Resolved, That his death, when so near the termination of the curriculum to the completion of which all his energies were bent, and which, judging from the character of his past scholarship, he would have finished with the highest honors, is, under the circumstances, peculiarly painful.

Resolved, That while this afflicting dispensation deprives us of one of the brightest ornaments of our association, and fills us with inexpressible grief, we humbly bow, acknowledging the wisdom and power of Him who doeth all things well.

Resolved, That in the death of our brother, we find an eloquent subject upon which to offer our heartfelt condolence to the University of Edinburgh, in having lost from her array of splendid scholars one of the brightest of her intellectual lights. Pre-eminent among the emotions caused by his demise, we acknowledge the lamentable fact, that one potent and living evidence of the black man’s ability in the higher walks of knowledge, has been forever withdrawn.

Resolved, That we tender to the family of the deceased our sympathy with them in their deep afflictions, with the hope that He who tempers the wind to the shorn lamb, may pour into their hearts the balm of consolation, and fit them to bear up under this bereavement, sad and insupportable though it seems to be.

Resolved, That copies of these resolutions be sent to the family of the deceased and the University of Edinburgh, and that they be published.

On December 20, 1860, Jesse Ewing Glasgow, Jr., the first graduate of the Institute for Colored Youth, died from illness while studying at the University of Edinburgh in Scotland. Following his death, Glasgow’s friends and colleagues at the Banneker Institute in Philadelphia passed a series of resolutions lamenting his untimely passing and commenting on his importance to the African American community. Among the authors of the resolutions were Glasgow’s friends and fellow Institute graduates Jacob C. White, Jr. and Octavius V. Catto. The resolutions were printed in The Christian Recorder on January 26, 1861. 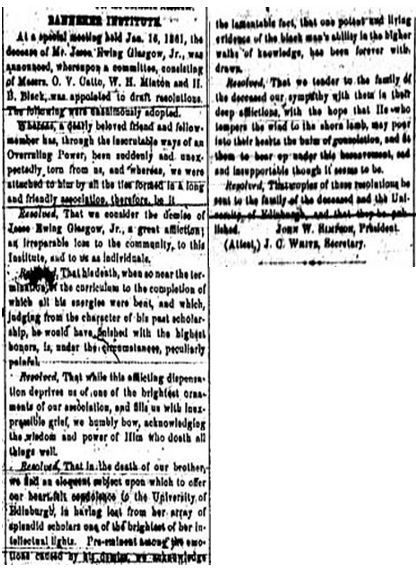