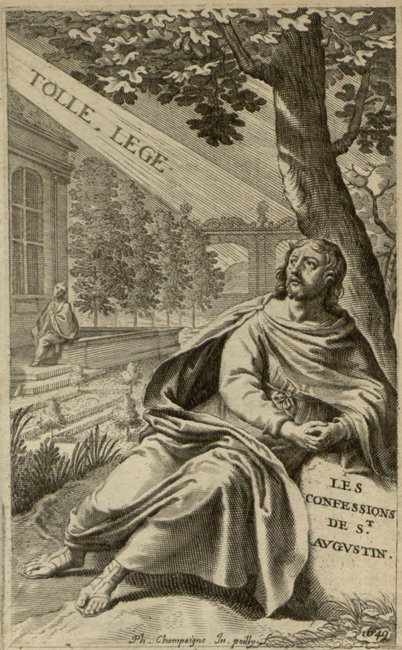 Augustine was born in 354 to Patricius, a town councillor in the North African town of Thagaste, and Monica. He had at least one brother and one sister. Monica and the rest of the household except Patricius were Christians, although following the tradition of the time Augustine was not baptized immediately after birth.

While studying at Carthage, Augustine became interested in Manicheism, a dualistic religion that viewed the cosmos as a struggle between light and dark. This brought him first to Rome in 383 and then to Milan, where he encountered the teachings of the bishop Ambrose and gradually became interested in the content of his sermons as well as their rhetorical aspect.  Ambrose's eloquence inspired Augustine to look at the Scriptures in a new way.

In the summer of 386, however, Augustine was still uncertain about committing to the Catholic faith. Augustine met with Simplicianus, Ambrose's mentor, and Ponticianus, a fellow African, and these encounters encouraged him to continue in his quest for enlightenment. Later, Augustine heard the words "Tolle lege" (or, "Take up and read") in his garden, which prompted him to read St. Paul's Letter to the Romans, leading to his final decision to become a Christian and a servant of God. Augustine was baptized at Easter in 387.

Augustine returned to Africa in 388, where he established a kind of monastic community at his hometown of Thagaste. In 391, he arrived in Hippo to found another monastery. Despite his initial reservations, he was subsequently ordained as a priest. He became Bishop of Hippo in 395/6 and retained that title until his death in 430.

Augustine was a prolific and influential writer and his teachings continue to have a profound impact on the Christian West to this day. His most well-known works include De doctrina christiana (Of Christian Doctrine), De trinitate (On the Trinity), De civitate dei (The City of God), and, of course, Confessiones (Confessions).

This is only a brief overview of Augustine's life to add a bit of context to this exhibit. For more information, see below.