Mark Twain, now best remembered for his novels including The Adventures of Tom Sawyer and The Adventures of Huckleberry Finn, was also an avid scrapbooker. He kept track of news and reviews of his books and lectures, pasting the clippings into blank albums. In 1872, Twain patented a "self-pasting" album in which the pages were coated with an adhesive that required only a slight application of moisture to stick scraps to them. This functioned like a lickable stamp or envelope flap. Twain partnered with Daniel Slote & Co. of New York to produce the albums in a variety of sizes, shapes, and styles.

This "pocket-size" version of Mark Twain's patented scrapbook format measures approximately 21 x 9 centimeters. Mrs. Charles D. Hine used the album to record the work of her husband in Iowa City, Nebraska around 1880. Hine was an attorney and an active member of the local Board of Education. In the third image, you can see the faint traces of the adhesive on the unused portion of the page at right. 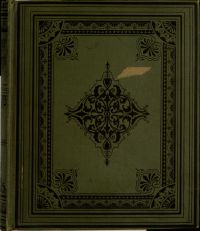 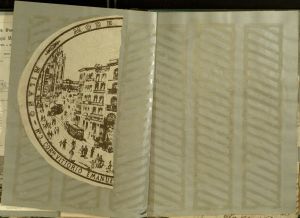 Another example of a Mark Twain patented scrapbook, this one documenting the European travels of a Mr. Ralph Emerson in 1883-1884. The third image shows some of the damage that happens when unused pages are exposed to moisture. These pages have stuck together at the inner margin, but other pages at the end of the album have stuck together entirely.

Although Twain's "self-pasting" pages made the act of sticking things in albums easier for scrapbookers, these albums proved to be quite a challenge for long-term preservation. Over the years any moisture on the pages, whether from humid air or from spills, causes any of the exposed adhesive to glue the pages together. In fact, this problem caused several other people to patent updates to Mark Twain's style of album, including an 1892 improvement from Frank Bowman: "A serious drawback to the use of that class of scrap-books having their leaves gummed has been that in warm moist atmospheres the contacting gummed surfaces soften sufficiently to adhere to each other and, when scraps or clippings are pasted on one of the opposite sheets, to such clippings or scraps. This is especially so in southern cities, where the dealers are not able at certain seasons to profitably keep this class of books in stock by reason of this difficulty." [Quoted from Bowman's patent application.] The World War I album below has a Mark Twain branded sticker, but the patent number cited belongs to Bowman. 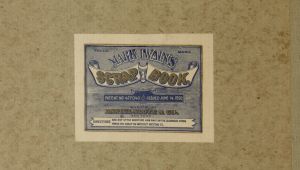 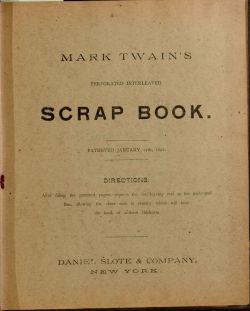 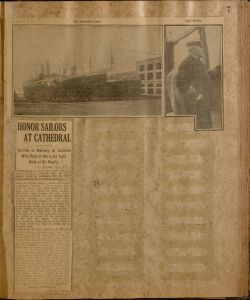 This album, used to document news stories from World War I, has "Mark Twain’s Scrap Book" branding and directions for how to use the adhesive strips on the title page in addition to the smaller patent sticker on the inside of the front cover.

View the WWI album in the Digital Library. 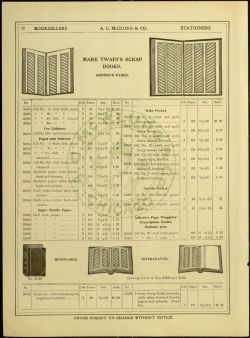 This page from a catalog for A.C. McClurg & Co. shows some of the many styles of "Mark Twain's Scrap Books" still available for sale in 1901.

View the McClurg ad in the Digital Library.