In Ireland with No Baedeker

The nineteenth century saw the emergence of two of the most successful series of guidebooks: Murrays and Baedekers.  Both were originally written by their publishers, John Murray III and Karl Baedeker, and became so successful that they continued as brands, including other authors and continuing after their original founders had died.  The British Murray and German Baedeker initially began on friendly terms, publishing complementary rather than competing guidebooks.  That changed in 1861 when the second generation of Baedeker began publishing his guides in English in direct competition with Murray.  Baedeker eventually won and, indeed, the series name became part of the English language, and the name is still as familiar in Western Europe as Xerox, Hoover, and Kleenex.

Our guide-book gave no definite directions as to how to get to Carrowmere.  "On Carrowmere," it says, with magnificent vagueness, "within three miles south-west of Sligo, is a large and most interesting series of megalithic remains"; nor does it tell how far the remains are apart, or how to find them.  If it had been Baedeker, now, we would not have stood there hesitant at the cross-roads, because he would not only have told us which way to turn, but would have provided a diagram, and led us step by step from one cromlech to the other.  There is no Baedeker for Ireland, which is a pity, for I have never yet found a guide to equal that painstaking German.

Curiously, although no Baedeker for Ireland was ever translated into English, the German series released four editions of Grossbritannien England (Ausser London), Wales, Schottland und Irland (the last edition was called simply Grossbritannien und Irland) from 1889 to 1906.

Here are two editions of Baedeker's Great Britain, one in German and one in English: 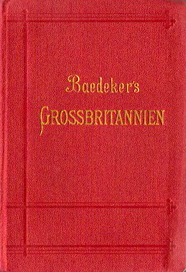