This exhibit highlights Irish travel narratives and related materials, primarily from the Joseph McGarrity Collection, in Falvey Memorial Library's Special Collections.  The site is broken into sections that highlight the methods of travel to and within Ireland, the motives of some of the most influential and popular writers, and the development of the tourism industry.  In addition, there are five sections that look at some of the most popular travel destinations.

Within this exhibit, Irish travel narratives are defined as accounts written by people who travelled within Ireland, whether for business or pleasure or any other reason.  These travels are largely from a British perspective, due to the specific holdings of Special Collections as well as the overall ratio of publications.  Between about 1750 and 1850, approximately 570 travel accounts about Ireland were published, with the majority of them written by British and Anglo-Irish authors.

It is also necessary to note that the term "Ireland" here refers to the island as a whole since the majority of the texts in this exhibit were published prior to Partition.  For those texts published after the formal Partition in 1921, the terms "Republic of Ireland" (an independent state) or "Northern Ireland" (part of the United Kingdom) are used as necessary.  Although the Republic was initially known as the Irish Free State (a dominion within the British Commonwealth) before declaring itself a republic in 1949, it is here referred to only as the Republic of Ireland for simplicity.

Where possible, links to full-text scans of the books discussed have been included. These links lead to material on Villanova University's Digital Library or on the Internet Archive.

Posted by Alexandra Edwards on Oct 19th, 2010
This exhibit looks beautiful! Good job, Laura and Joanne.
Posted by Brittany Lehman on Oct 24th, 2010
The site is well put together and extremely well researched! Thank you for a beautiful and informative site!
Posted by Inga Gorslar on Nov 1st, 2010
This is a wonderfully informative and above all well-executed site! If I ever go to Ireland, I'll make sure to either take a Baedeker or you along. 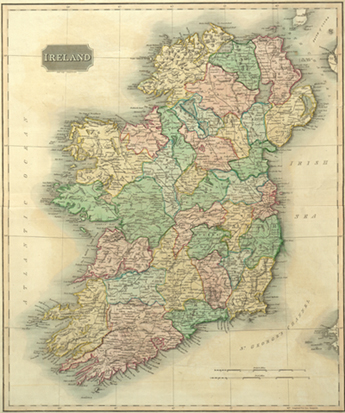