Most early attempts to explore the Antarctic regions were performed by sealers and whalers looking for commercial prospects. From 1839-1843, the British naval officer James Clark Ross attempted to locate the magnetic South Pole, but was only able to explore the coastlines. The first documented person to set foot on the Antarctic mainland was the American sealer Mercator Cooper in 1853. The inherent difficulties of the terrain and limited economic prospects caused a lull in exploration until the end of the 19th century, when the so-called Heroic Age of Antarctic Exploration began, lasting until just after the end of the First World War. The “heroic” tag, applied later in the 20th century, was a nod to the physically and mentally grueling conditions of these journeys, made before the benefits of later mechanical innovations. The expeditions of this age collected valuable geographic and scientific information, as well as competing to be the first to reach the South Pole. 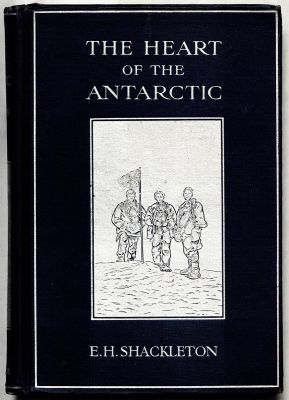 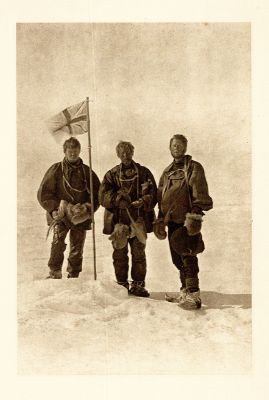 Shackleton, Ernest Henry, et al. The Heart of the Antarctic: Being the Story of the British Antarctic Expedition 1907-1909. J.B. Lippincott Company, 1909.

Sir Ernest Shackleton, an Anglo-Irish explorer, made four expeditions to Antarctica between 1901 and 1922, leading three of them. He was third officer on Robert Falcon Scott’s Discovery expedition, 1901-4, before heading his own expedition in 1907 aboard the Nimrod. This expedition, split into two parties, achieved a new record for farthest south of 88° 23' S; made a first ascent of Mount Erebus, the most active and second-highest volcano on the continent; and were the first to reach the South Magnetic Pole (different from the geographic South Pole first achieved by Amundsen). Shackleton wrote about this expedition in The Heart of the Antarctic, published after their return in 1909. 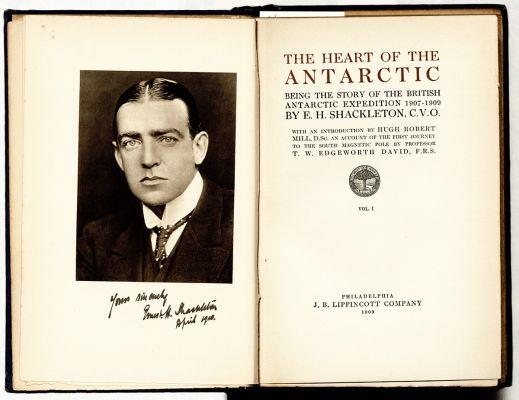 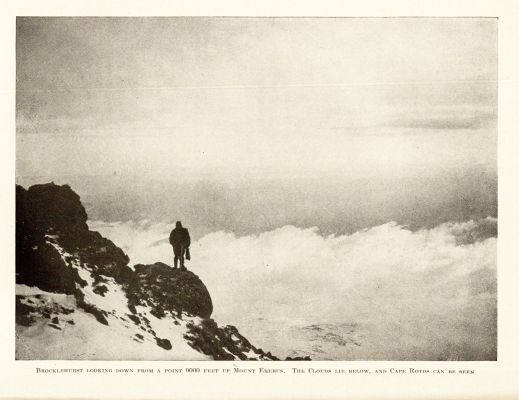 Mawson, Douglas. The Home of the Blizzard: Being the Story of the Australasian Antarctic Expedition, 1911-1914. J.B. Lippincott Company ; William Heinemann, 1914.

Sir Douglas Mawson, an Australian geologist and explorer, was a member of Shackleton's Nimrod Expedition (1907–1909), in which he was part of the expedition’s northern party, the first to climb Mount Erebus and the first to reach the South Magnetic Pole. Mawson then declined an invitation to accompany Scott’s Terra Nova Expedition in 1910 and instead went on to lead the Australasian Antarctic Expedition of 1911-14, which made many important scientific observations of the continent’s biology, geology, and meteorology. The expedition was split into multiple parties; Mawson ended up being the sole survivor of his three-man survey team, narrowly avoiding death himself. 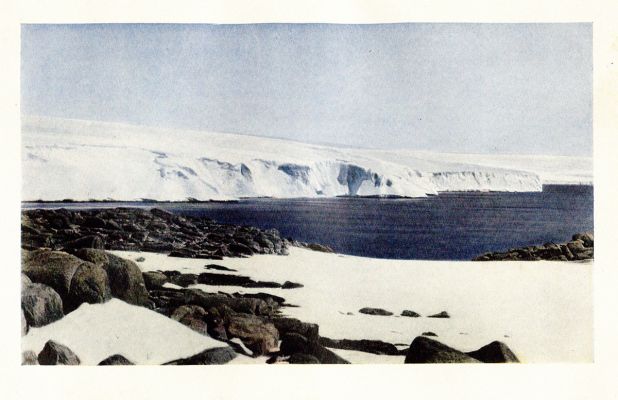 "Antarctica is a world of colour, brilliant and intensely pure..." / Commonwealth Bay 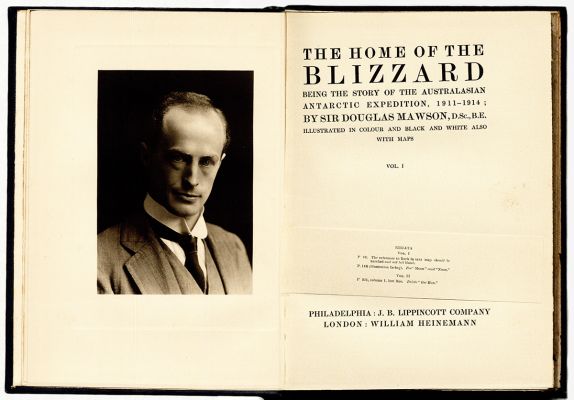 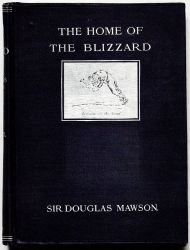 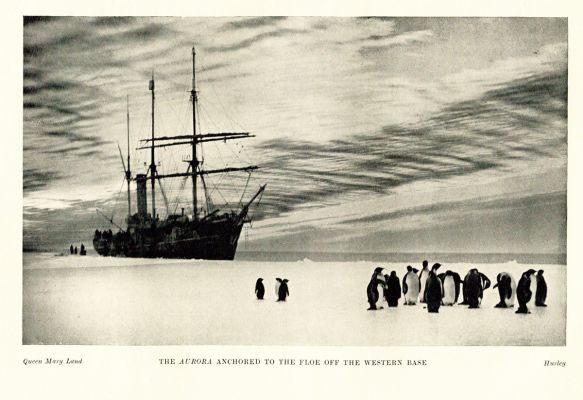 Scott, Robert Falcon, et al. Scott's Last Expedition in Two Volumes: Vol. I. Being the Journals of Captain R.F. Scott, R.N., C.V.O. Vol II. Being the Reports of the Journeys and the Scientific Work Undertaken by Dr. E.A. Wilson and the Surviving Members of the Expedition. Dodd, Mead and Company, 1913.

Captain Robert Falcon Scott of the British Royal Navy led the Discovery expedition in 1901-4 in which he achieved the farthest south record of 82°S and reached the Antarctic Plateau, where the South Pole is located. Returning to Antarctica on the Terra Nova Expedition of 1910-13, Scott and his party made an attempt to be the first to reach the South Pole. Upon arriving, however, they found that the Norwegian party led by Roald Amundsen had beaten them by 34 days. Scott forlornly noted this in his diary: "The worst has happened [...] All the day dreams must go [...] Great God! This is an awful place." Despite careful plans, the expected rendezvous with a support party of dog sleds on the return journey did not happen, and Scott and his companions perished in March 1912.

A search party discovered their bodies in November 1912 and recovered their final letters and documents. In addition to their written records, Glossopteris tree fossils were found with the bodies, the first fossils to be found in Antarctica, proving that the continent had once been warm. A memorial cross made by the ship’s carpenters includes the names of those who died and the quote, “To strive, to seek, to find, and not to yield” from the poem “Ulysses” by Alfred, Lord Tennyson. 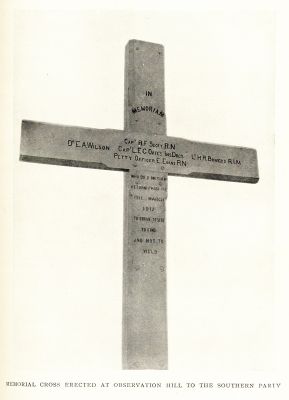 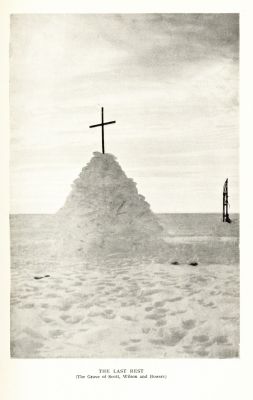 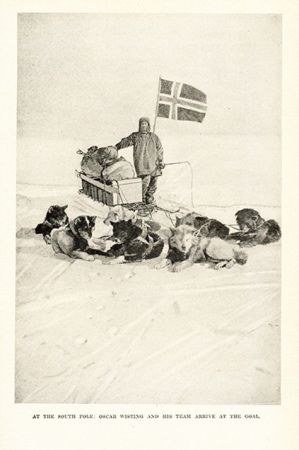 Norwegian explorer Roald Amundsen and his companions were the first humans to reach the geographic South Pole, arriving on December 14, 1911, 34 days before Robert Falcon Scott’s disastrous Terra Nova Expedition. After Amundsen’s successful crossing of the Northwest Passage in 1906, he initially set his sights on being the first to attain the geographic North Pole and was able to secure the use of fellow Norwegian Fridtjof Nansen's polar exploration ship Fram. In 1909, Frederick Cook and Robert Peary each separately claimed to have reached the North Pole, so Amundsen instead decided to plan a run for the South Pole. However, all of the fundraising and publicity for the expedition had centered on the North Pole and Amundsen was uncertain if he would retain that support with a different goal, so Amundsen kept his revised plans secret, not even telling his crew their actual destination until they sailed from their last port of call. After months of preparations and a near-fatal false start, Amundsen set out for the South Pole with four other men in October 1911, arriving two months later. 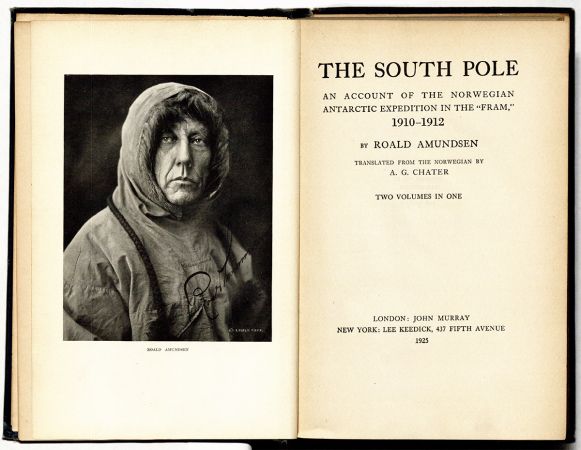 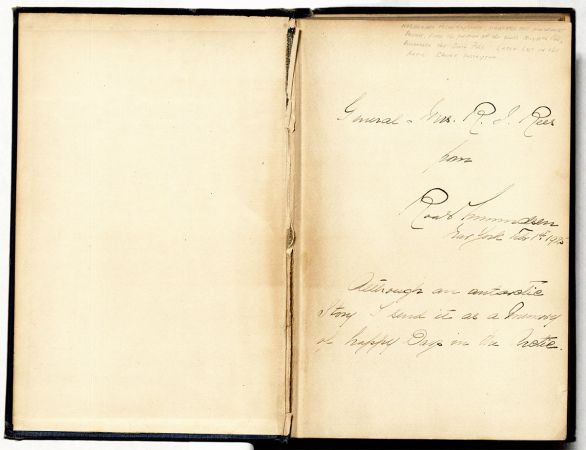 After learning in early 1912 that Roald Amundsen had successfully reached the South Pole, Shackleton’s next adventure was the Imperial Trans-Antarctic Expedition of 1914-17, in which he proposed to be the first to cross the continent. The expedition required two ships, the Endurance (with Shackleton’s party) and the Aurora, with the plan being for Endurance to land near Vahsel Bay, from which the transcontinental march would begin, and for Aurora to establish a camp at McMurdo Sound on the other side of the continent and create a series of supply stations for the transcontinental party, which could not carry enough provisions for the entire journey.

Unfortunately, Endurance became trapped in ice in early 1915 and drifted north with the ice until being crushed in October. The crew were able to establish a temporary camp on the ice until April 1916, when they took the lifeboats to head for the uninhabited Elephant Island. From there, Shackleton and five crew members made a perilous 800-mile journey in a lifeboat to reach South Georgia and mount a rescue in August 1916 for the remaining 23 men, returning home without any deaths.

The Aurora also did not fare well. The ship broke from its moorings during a storm and was carried out to sea with drifting ice, leaving the land party of ten stranded without the majority of their supplies. Aurora drifted with the ice pack for nearly a year before being able to reach New Zealand in February 1916 and send a rescue party for the men stranded in Antarctica. Of the original ten, seven had survived by the time they were rescued in January 1917. 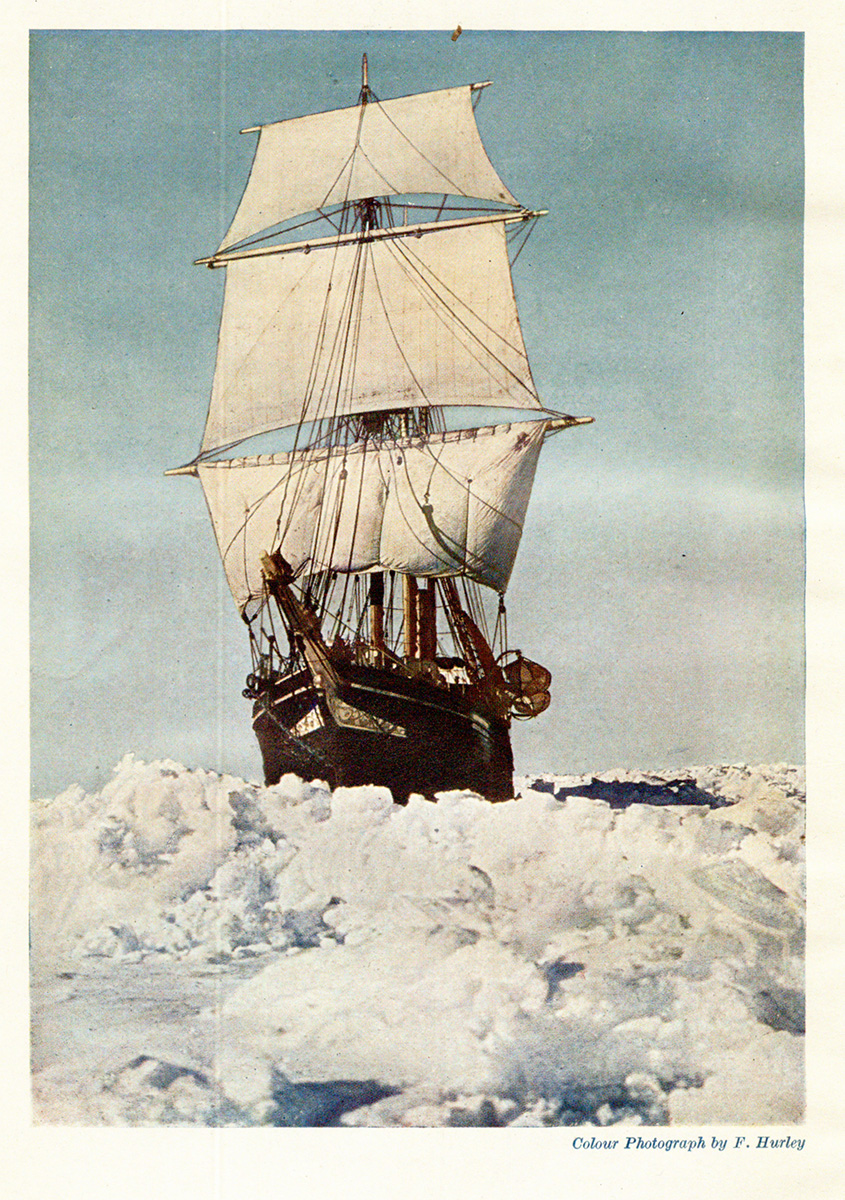 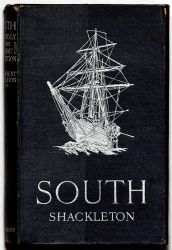 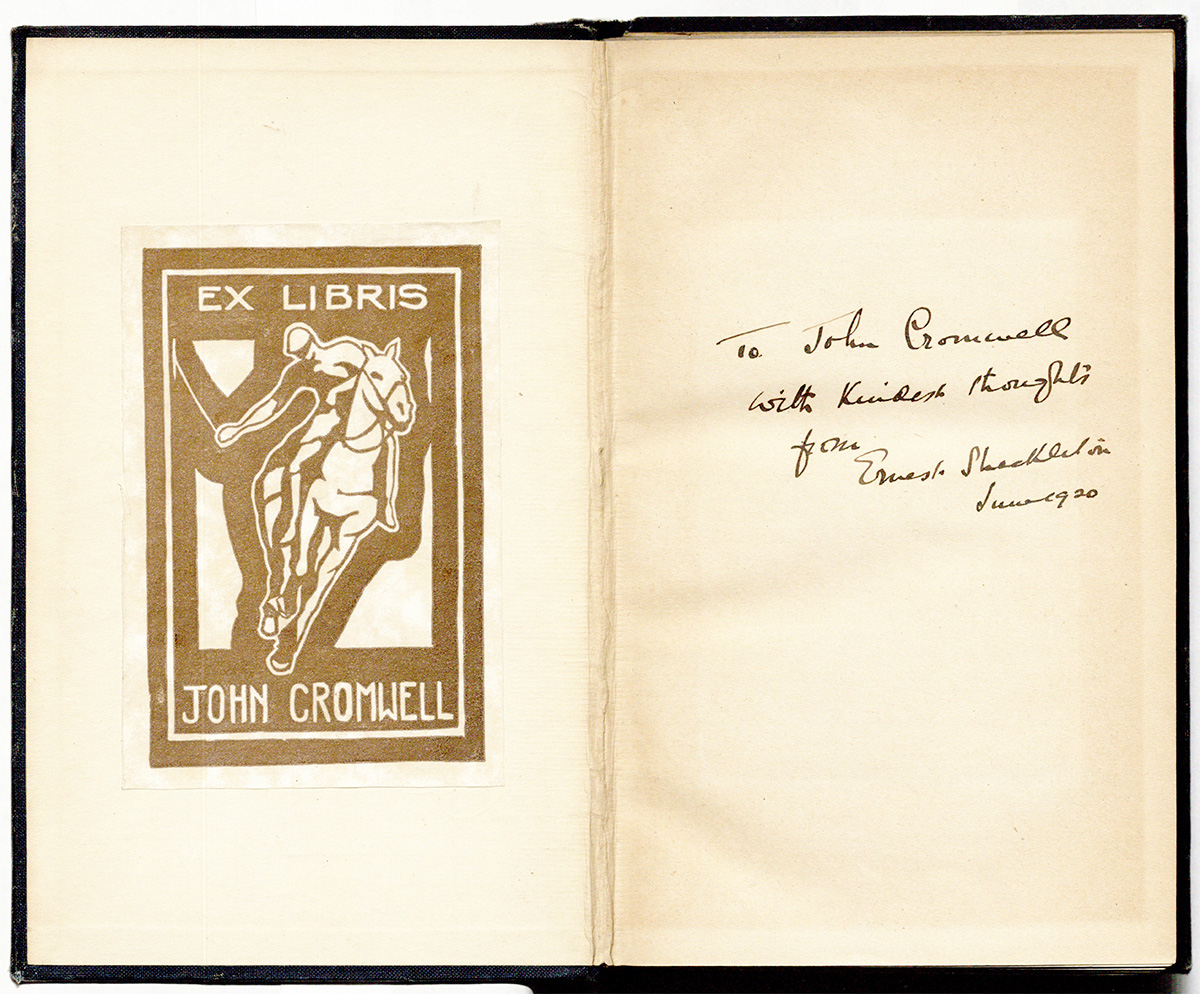 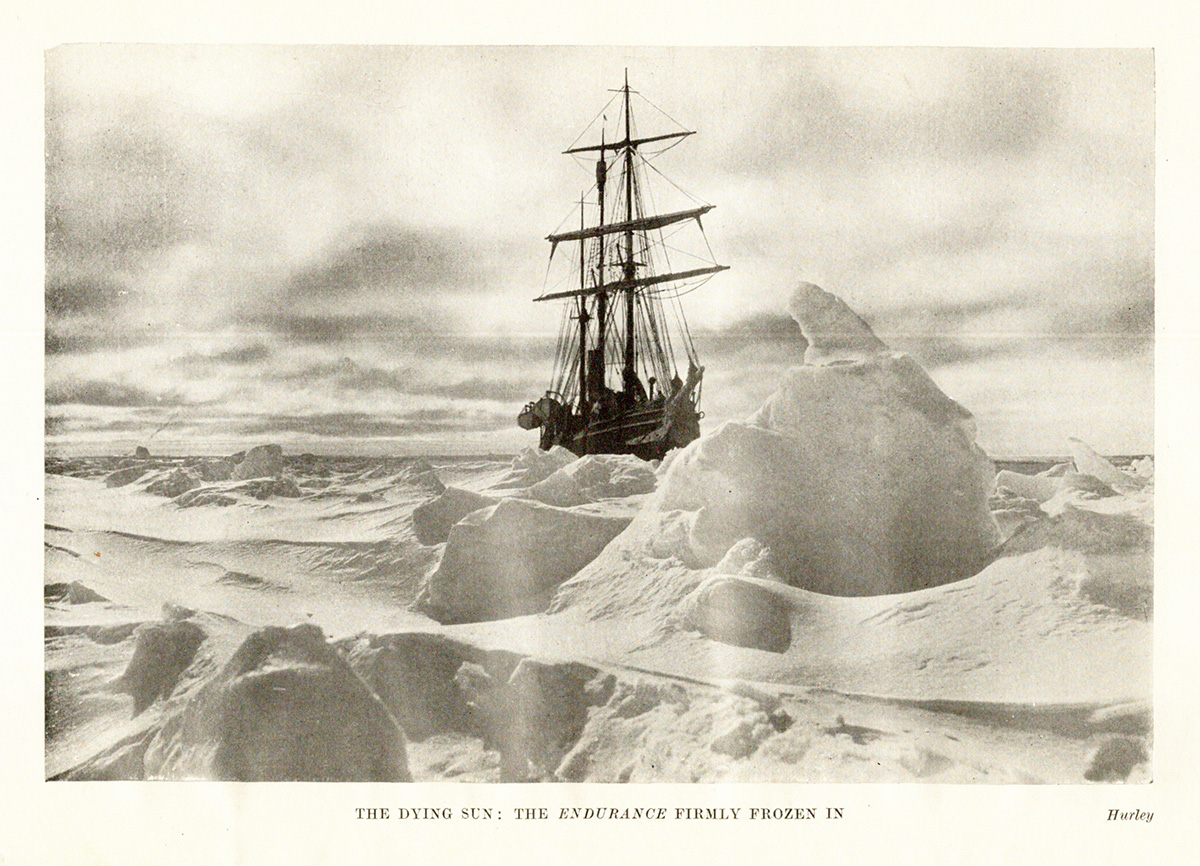