Perhaps even more so than new discoveries and records set, nothing captured minds quite like mysterious disappearances, tragedy, and epic failures. A trip to the ends of the earth no matter how well-prepared had to contend with extreme elements and the ice, with the very real threats of starvation, frostbite, hypothermia, snow blindness, and sickness and disease that would easily spread in small ship quarters. There were also even darker possibilities of madness, murder, and cannibalism.

“Polar exploration is at once the cleanest and most isolated way of having a bad time which has been devised.” So begins Cherry-Garrard’s memoir of his time on the Terra Nova Expedition to the South Pole led by Captain Robert Falcon Scott. Scott and his polar party of four other men reached the Pole, only to discover Norway’s Roald Amundsen had beaten them in the quest to be first by about five weeks. They never returned. Cherry-Garrard was part of the scientific team sent to secure Emperor penguin eggs, and it is this journey through the harsh Antarctic winter that he describes. Often hailed as a masterpiece of polar travel writing and adventure books in general, it still tops lists today.

Under the direction Lieutenant Commander George W. De Long and the U.S. Navy, the USS Jeannette set sail from San Francisco on July 8, 1879 aiming to reach the North Pole via the Bering Strait. The ship became trapped in pack ice, drifted for nearly two years, and was eventually crushed and sank on June 12, 1881 in the East Siberian Sea. The crew separated into three small boats. One boat, commanded by Executive Officer Charles W. Chipp was lost and has never been found. Only two men from De Long’s boat survived, while the third boat under the command of Chief Engineer George W. Melville reached rescue in Russia’s Lena River delta, with Melville returning to search for his lost companions. Thirteen of the thirty-three-man crew survived. They returned to the U.S. with a hero’s welcome.

Numerous books have been published on the saga, from The Voyage of the Jeannette: the ship and ice journals of George W. De Long (1883) compiled and edited by his wife, Emma De Long, and Melville’s own account, In the Lena Delta: a narrative of the search for De Long and his companions (1885) - to more recent gripping historical narratives like Hampton Sides' In the Kingdom of Ice: The Grand and Terrible Polar Voyage of the USS Jeannette (2014).

The ill-fated journey was not entirely without merit. Wreckage from the ship found in Greenland suggested an east-west ocean current that inspired Nansen’s 1893 Fram expedition. The Jeannette’s detailed logbooks and meteorological records preserved in the U.S. National Archives have provided 21st-century climatologists with valuable data. A project by www.oldweather.org invites the public to transcribe digitized records of ship logbooks. The Jeannette’s measurements of ice and weather compared with today’s show the alarmingly rapid rate of climate change and the shrinking polar ice cap.

Read more about the project HERE. 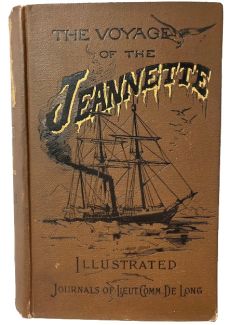 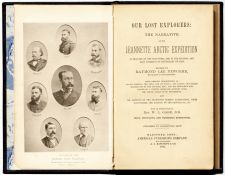 Our Lost Explorers: The Narrative of the Jeannette Arctic Expedition as related by the survivors, and in the records and last journals of Lieutenant De Long. Revised by Raymond Lee Newcomb. Hartford, Conn.: American Publishing Company, 1882. 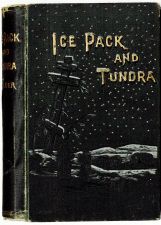 Gilder, William H. Ice Pack and Tundra: an account of the search for the Jeannette and a sledge journey through Siberia. New York: Charles Scribner's Sons, 1883. 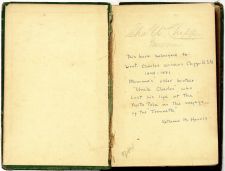 “Andrée Sails Away on His Perilous Expedition.” At the time this article was written, the author could not have known just how perilous the outcome of Andrée’s expedition turned out to be. The illustration imagines a scene as Swedish aeronaut S. A. Andrée in his pole-ward bound balloon, “Astonish the Eskimo of the Frozen North.” Such a scene may never have happened. Andrée and his two companions launched on July 11, 1897 and journeyed in the air (but mostly bumped along the ground) for sixty-five hours before abandoning the balloon on July 14. They continued over drifting pack ice for months but were never heard from again. Their bodies, along with detailed notebooks, diaries, and photographic negatives, were discovered on a remote Svalbard island in 1930. 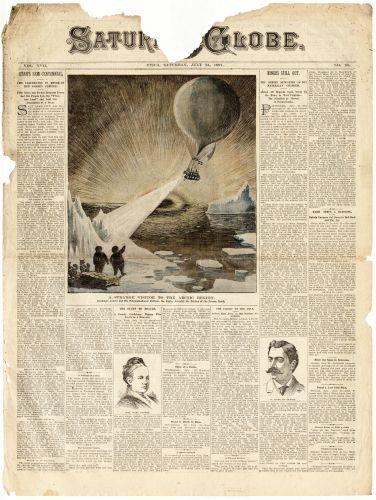 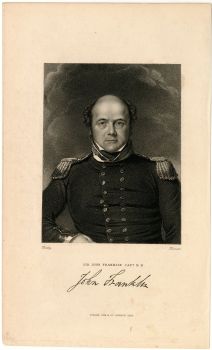 In 1845 Sir John Franklin led the HMS Erebus and HMS Terror in a British expedition to further explore the Northwest Passage. It was Franklin’s third voyage to the Canadian Arctic and the ships were well-equipped with three years' provisions. After two years with no word, and at great urging from the public and Lady Jane Franklin, the Admiralty eventually agreed to send several search parties in 1848, with dozens more in the years following. Clues were gathered from artifacts and Inuit testimony, but the full story may never be known. There are theories of lead poisoning, scurvy (vitamin C deficiency), pneumonia and tuberculosis, or a combination of diseases made worse by their situation. There was also evidence of cannibalism. All of the crew’s 129 lives were lost. The wreck sites of the two ships were not discovered until 2014 and 2016.

This object, used as an Inuit lamp, was made from a single sheet of copper that purportedly came from one of Sir John Franklin’s ships. The relic was traded among the Inuit, obtained by an American whaling ship, and crossed through the hands of Rear Admiral George W. Melville (of the USS Jeannette), who gave it to the Philadelphia Geographic Society. These lamps were traditionally made of soapstone. 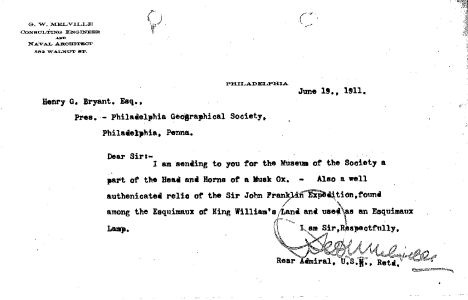 Next: Search and Survival