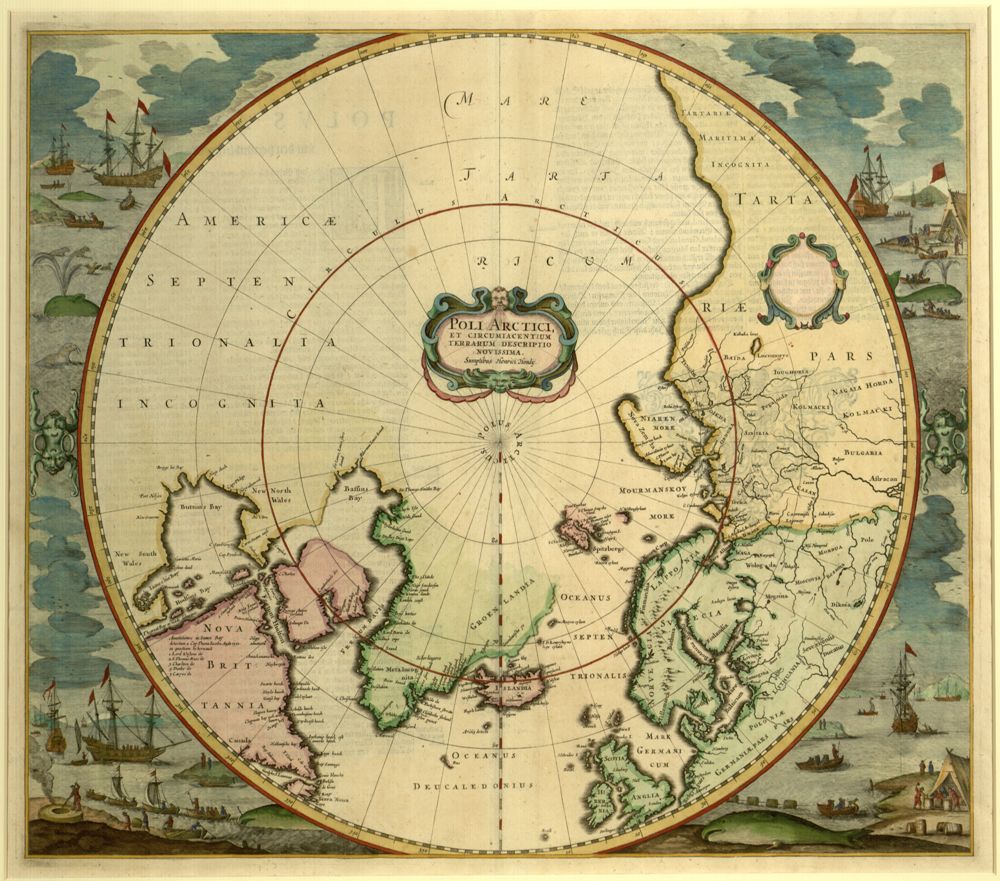 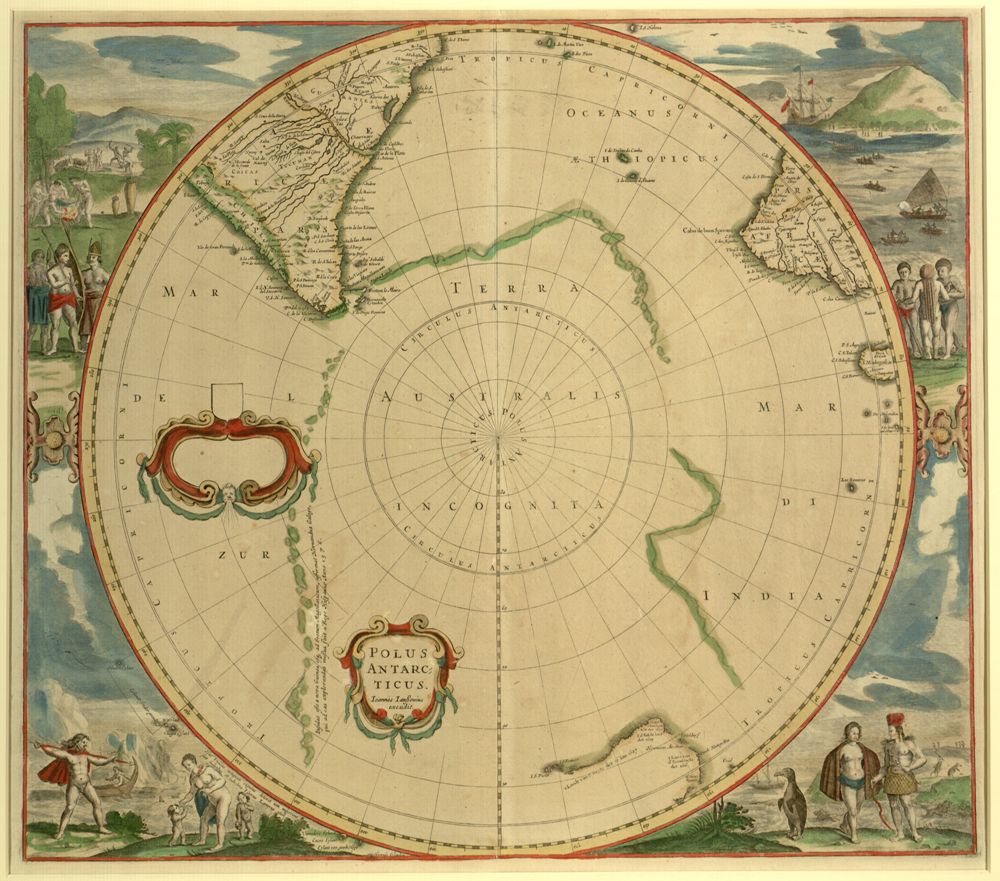 (Both maps from the John F. Smith, III and Susan B. Smith Antique Map Collection.)

This pair of maps drawn by Hendrik Hondius (1573-1650) in the first half of the 17th century show the northern and southern ends of the Earth as they were understood at that time. Exploration of the polar landmasses in an attempt to reach the North and South Poles did not begin in earnest until the 19th century, although several expeditions crossed into the Arctic and Antarctic Circles before that. If you look closely at these maps, you will see that they are incomplete, with only vague lines showing the outlines of what had then been seen and documented of the Arctic and Antarctic regions. In addition, these maps have decorative corners that depict some of the local people, animals, and scenery that had been described in published accounts.

Captain James Cook (1728-1779) led three voyages to the Pacific for the British Royal Navy between 1768 and 1779. During his second voyage the Antarctic circle was crossed for the first time, though the mainland of Antarctica could not be reached through the ice. As seen on the map above, the suspected land mass was unknown but hypothesized as Terra Australis Incognita ("the unknown land of the south"). Cook's expedition circumnavigated the globe far south and visited many islands charted during his first voyage. This two-volume record included striking engraved plates, portraits, and maps to illustrate the journey. At the time of its publication in 1777 Cook was already commanding his third and final voyage, this time in search of the Northwest Passage, but was again blocked by sea ice. 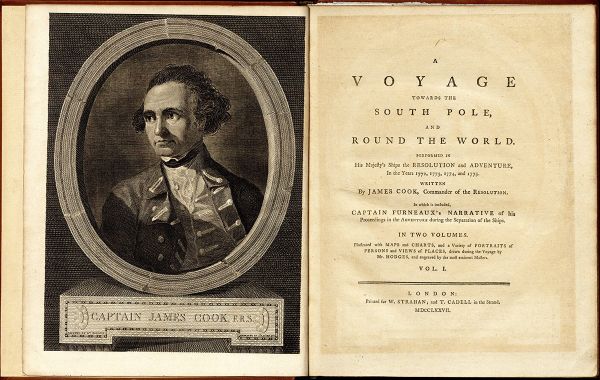 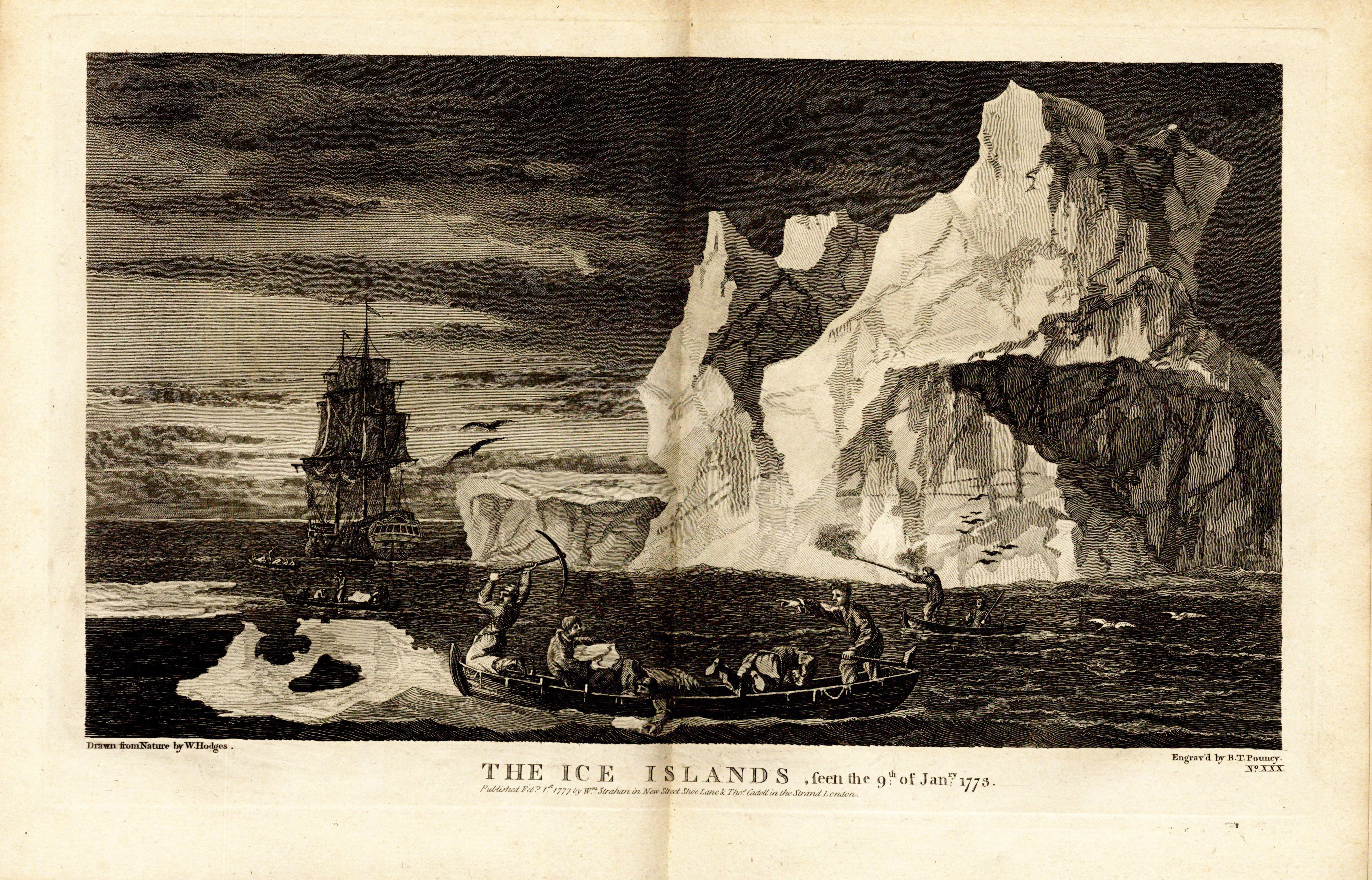 Ross, John, Sir. A Voyage of Discovery, made under the orders of the Admiralty, in his Majesty's ships Isabella and Alexander for the purpose of exploring Baffin's Bay, and enquiring into the possibility of a North-West Passage. John Murray, Albermarle-Street, 1819.

In 1818 the British Admiralty reinvigorated their search for the Northwest Passage with an Arctic expedition led by John Ross (1777-1856). Also on the voyage were Ross's nephew James Clark Ross, William Parry, and Edward Sabine who would all later lead expeditions of their own. The trip was marked by controversy when they returned to England with Ross claiming the way was blocked by what he named the Croker Mountains. Several officers disputed his account and Parry was sent in command of the next Arctic expedition. Although Ross's journey led to no new discoveries, the published account of the narrative with large illustrated colored plates and appendices of botanical and meteorological data, followed an emerging pattern of expedition journals for general audiences, which would continue to flourish over the next century. These gorgeous hand-colored aquatints are from a German edition of the publication. View the full item in our Digital Library.

Next: The Northwest Passage