Villanova has had a long history with the military, the Army ROTC program, as we know it today, came into being with the passage of the National Defense Act of 1916 where many academic institutions, including the Villanova college were part of the initial cohort. During World War II, the "Holloway Bill" had twelve universities and colleges picked to become training centers for enlisted men to become officers, and at the same time receive a college education.  Villanova College was one of these schools and in July of 1943 an official part of the "V-12" program [1]. The longstanding military tradition and deep anti-communist beliefs held firmly by administration, faculty, and the Church meant the Vietnam War was relatively supported on campus. But by the late 1960s, there was growing, albeit small, momentum of vocal criticism of the war.  Unlike many other campuses of the time, civil rights, environmental rights, or women's rights did not have the same presence on campus, whereas the Vietnam War and anti-war protests had more widespread activity. This was indicative of the relevancy to the student population, as the majority of students were white men faced with the possibly of the draft.

The tension could be felt on campus, as the question of support for military intervention reverberating throughout campus life. For example, in 1969, D. William Rabe, playwright and Vietnam Veteran, wrote a play, "Bones," performed on campus critical of the war, racial tension, and religion [2]. 1968 saw a series of demonstrations against the local ROTC unit. Lead by Concerned Citizens students would chant anti-war songs and conduct a prayer for peace on the Mendel Field where ROTC were doing drills [3]. Antiwar protests would continue into the early 1970s.

For more information on Concerned Citizens:

[1] “The Beginning of the Holloway Bill.” The Holloway Bill | Villanova University, www1.villanova.edu/villanova/artsci/nrotc/about_us/history/inception/holloway_bill.html. 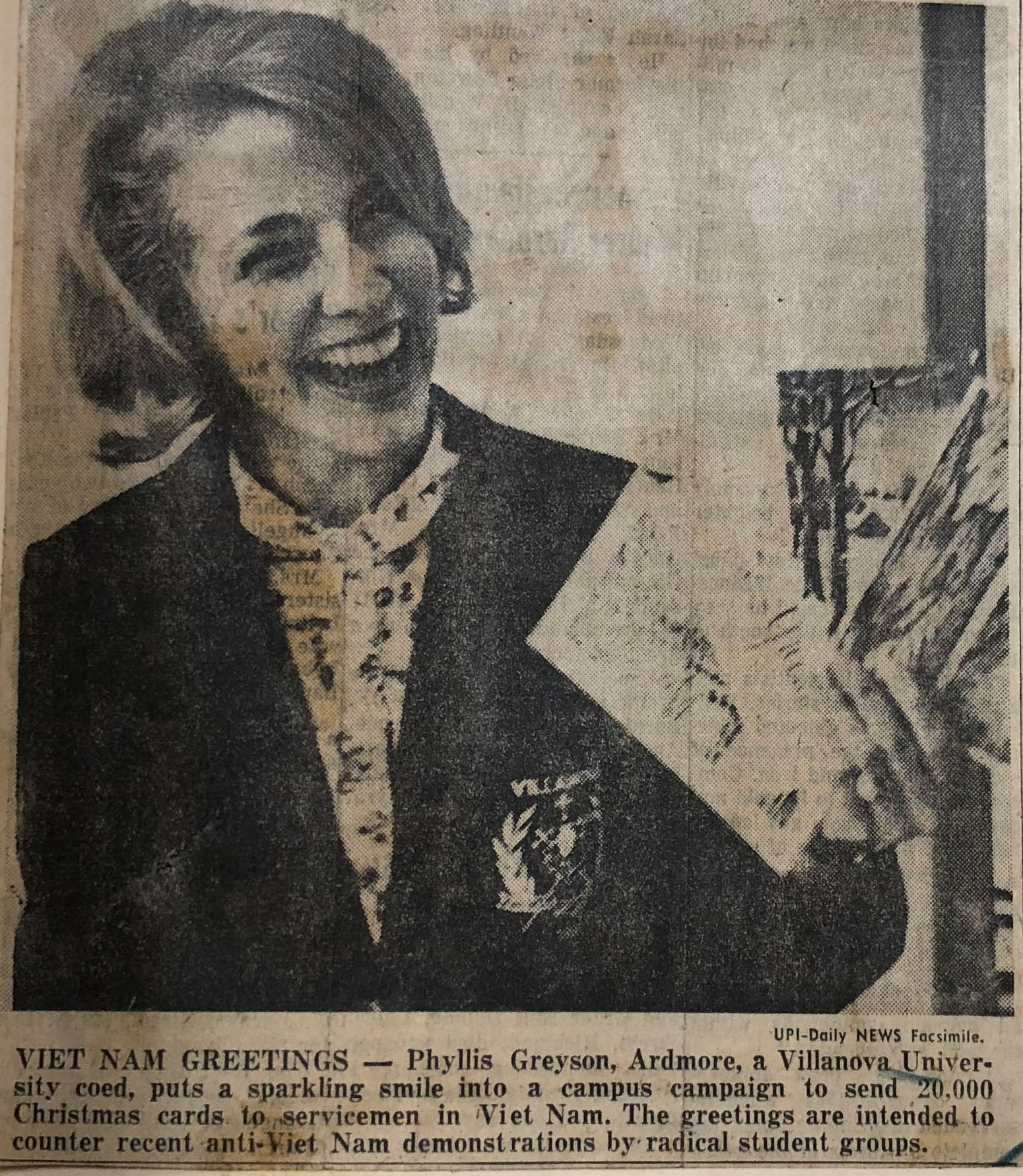 A piece of mail for every man in Vietnam and a special effort to contact prisoners of war in Hanoi were the goals of Villanova’s annual student-run project. The aim was to ease the loneliness and bring cheer to those in combat during the Christmas season. The project began in 1965 as response to June Orsteen, of Gladwyne, PA, who came up with the campaign after watching a television interview of Vietnam servicemen disillusioned by the support from home. The project sent over 150,000 pieces of mail and Villanova attracted national attention with commendation from President Richard Nixon and students who ran the campaign were invited to the White House to receive congratulations. 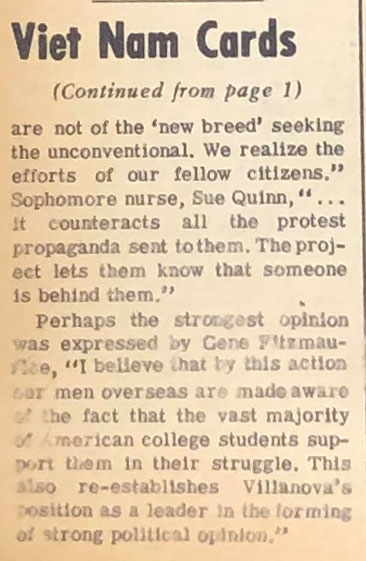 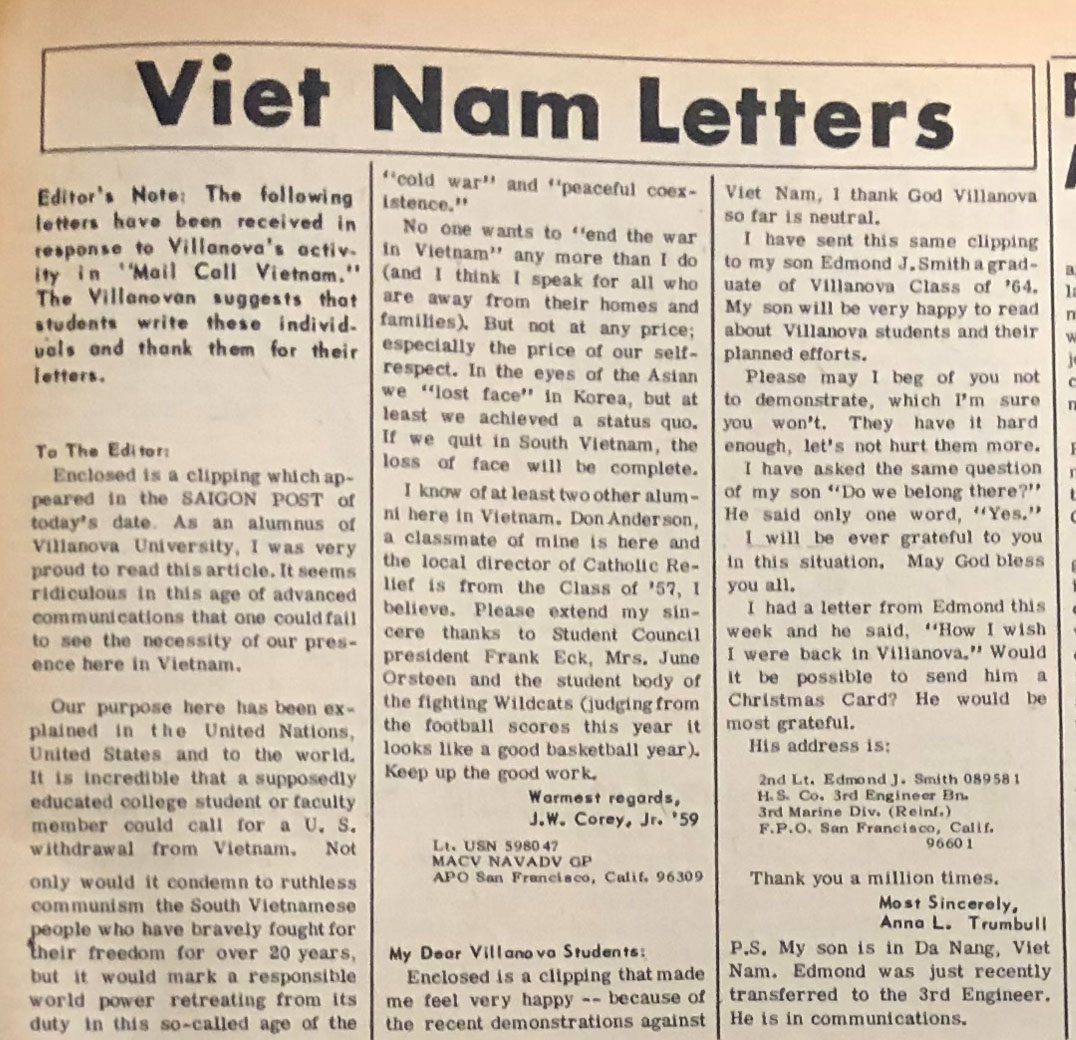 The article details how ten individuals occupied the side chapel in the St. Thomas of Villanova Church in protest of the war.

& Letters to the Editor

The reading includes the article, "It's Old Helmet," a criticism of the war, as well as "Letters to the Editor" from students on both sides of the argument.

The article details how recruiters from Dow Chemical were on campus to meet with students and, at the time, Dow was responsible for manufacturing napalm, prompting many students to protest against their practices and presence on campus.