In celebration of the 50th anniversary, this mini exhibit illustrates how Villanova University has participated in the first Earth Day and other activities on campus to advocate for environmental changes over the years. All the material presented are from the University Archives.

Inspired by the burning Cuyahoga River in Cleveland and the Santa Barbara Oil Spill in 1969, Senator Gaylord Nelson spearheaded the creation of Earth Day as a way to force environmental protections onto the national agenda. Philadelphia was the first city to host Earth Day back in 1970. Though Earth Day is celebrated as a single day, the first formation was an entire week held April 16-22, 1970. Earth Week was organized by community leaders, local faculty, and a group of graduate students from University of Pennsylvania's School of Design. The Earth Week committee brought in speakers like Urban Planner and author Lewis Mumford;   Harvard Biochemist, George Wald; climatologist, Helmet Landsberg; Dune writer, Frank Herbert; consumer protection activist, Ralph Nader; and poet, Allen Ginsberg. Along with speakers, multiple concerts and activities were held throughout the city.

Momentum of Earth Week led to the formation of the Environmental Protection Agency that summer by special executive order to regulate and enforce national pollution legislation. Earth Day has also led to the the passage of the Clean Water and Endangered Species Acts.

At the time, David Powell was a University of Pennsylvania student and designed the button for the Philadelphia Earth Week Committee. The buttons were produced locally. Earth Week buttons can be found at the Smithsonian Institute today. 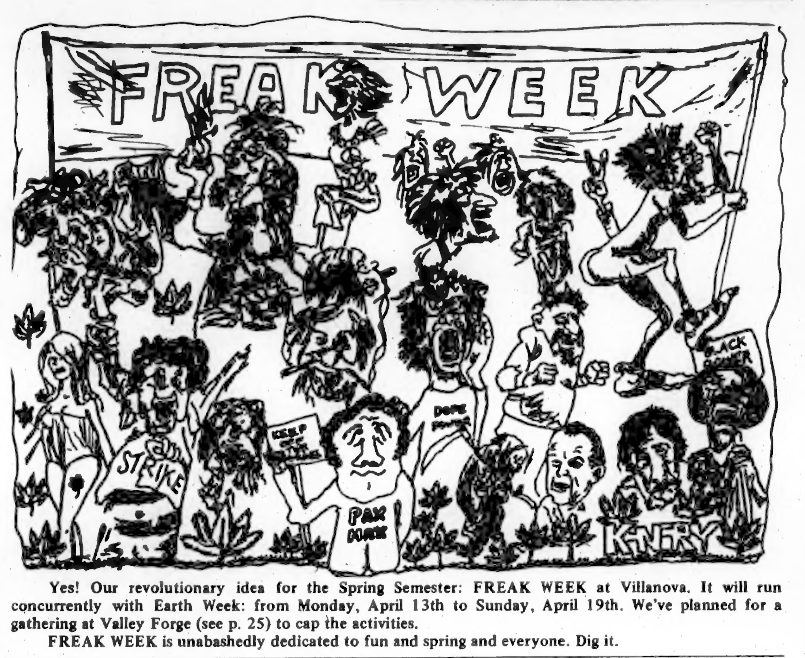 Events and activities of the week expanded beyond Philadelphia as Villanova University hosted activities for Earth Week. Concerns of the day for Villanova community was population and urban congestion, air pollution, ocean pollution, transportation safety, and nuclear power. Notable figures like Paul R. Ehrlich, Ralph Nader, and Allen Ginsberg spoke on campus during the week. Concurrent to the national discourse around the environmental issues, Villanova  proposed introducing an environmental program to the College of Arts and Sciences. 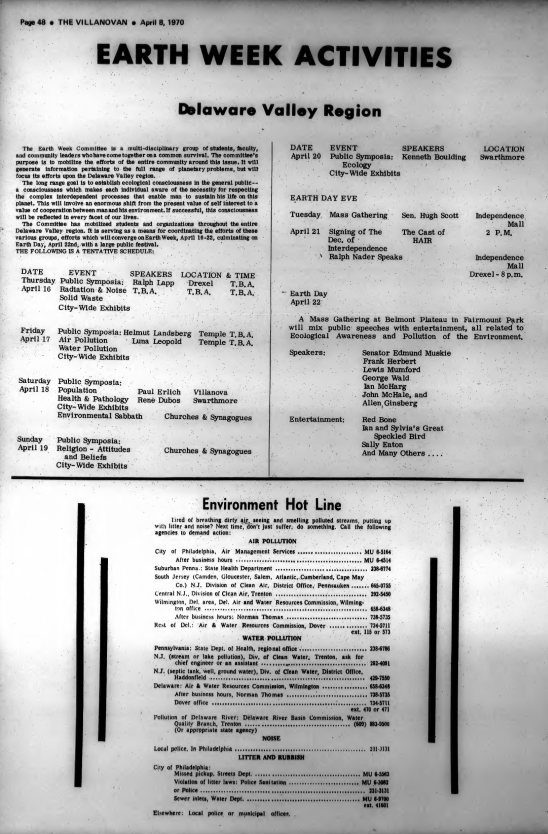 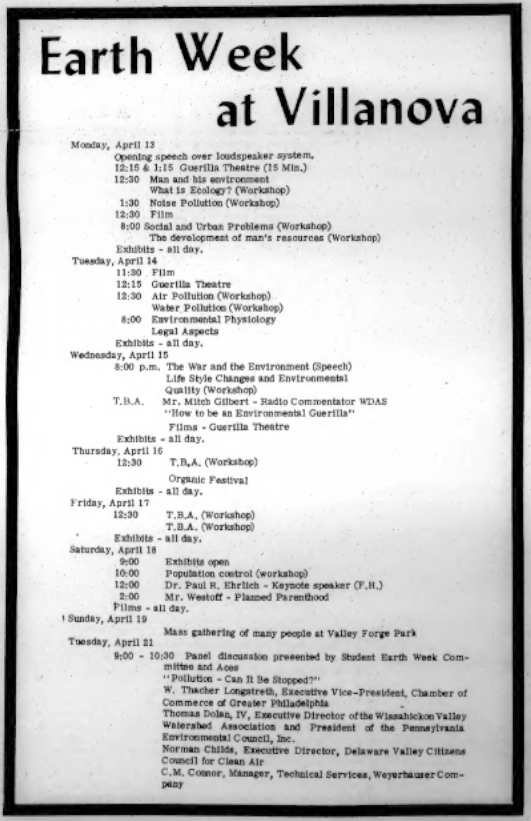 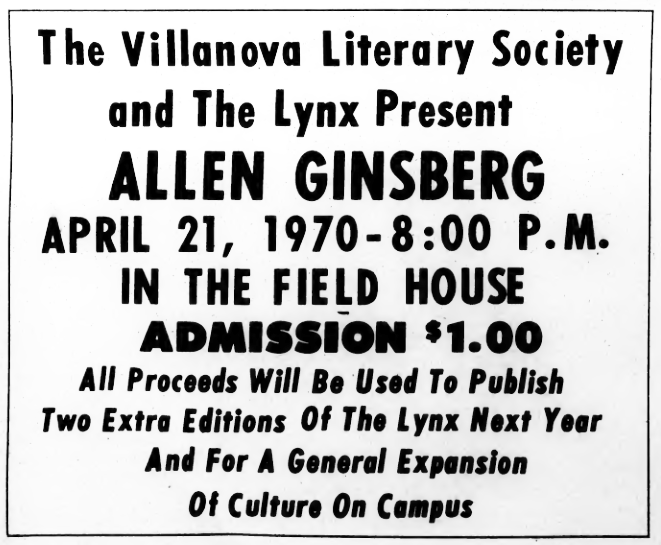 The issue includes a special spring issue regarding Earth Week on campus. Includes campus and local schedules, local environmental hotlines, excerpts from The Population Bomb, by Paul R. Ehrlich, interviews, and articles about the environmental issues of the day.

Over the years, Earth Day has emerged as annual event on campus with lectures, live music, food, games, and collaboration with student groups to raise awareness about environmental issues. Events have been organized by Villanova Environmental Group (VEG) since the 1980s, which still exists today. 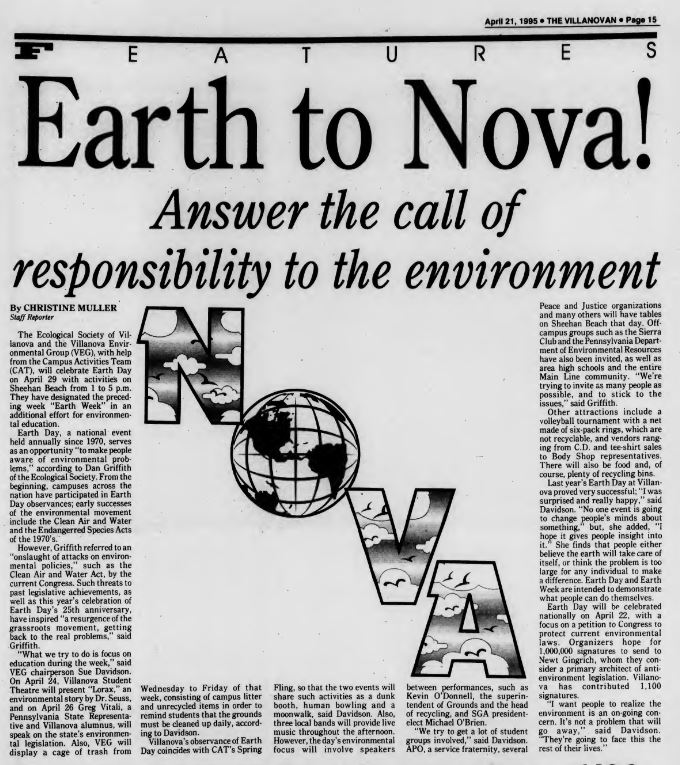 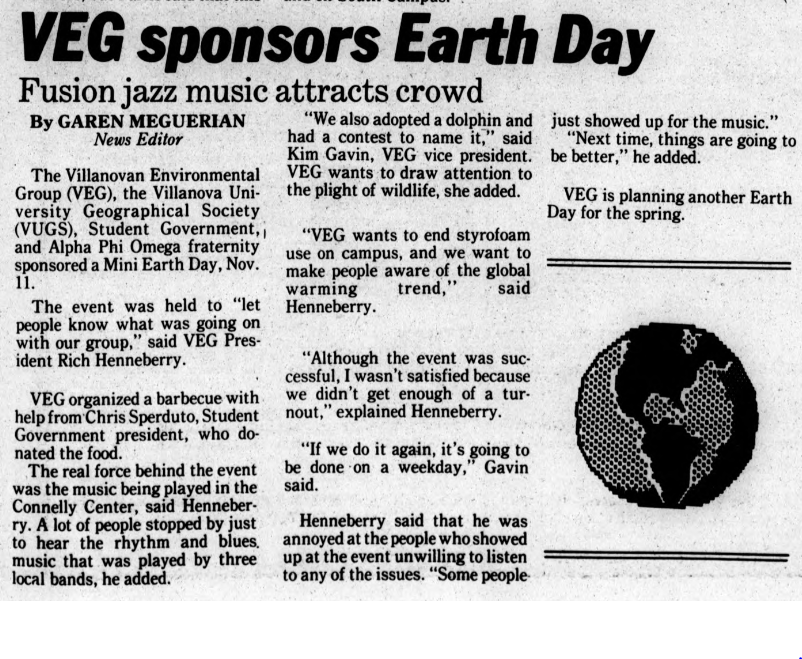 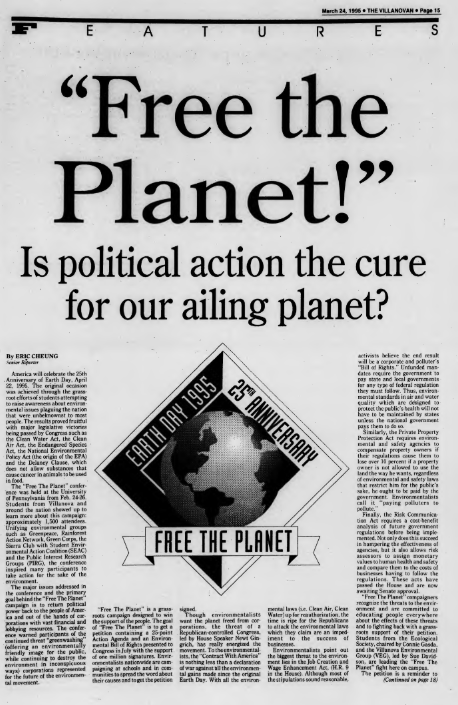 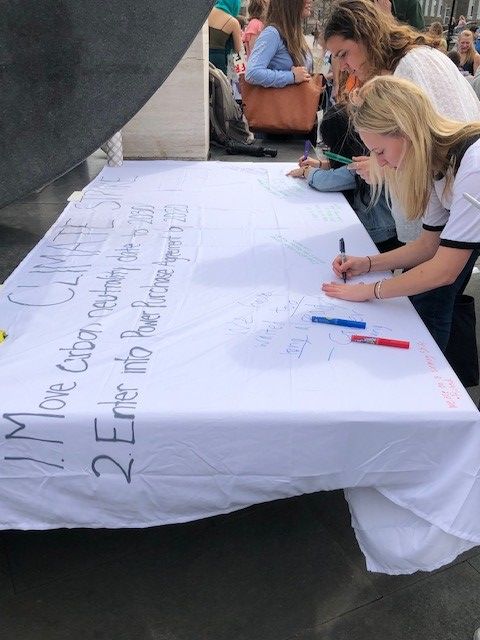 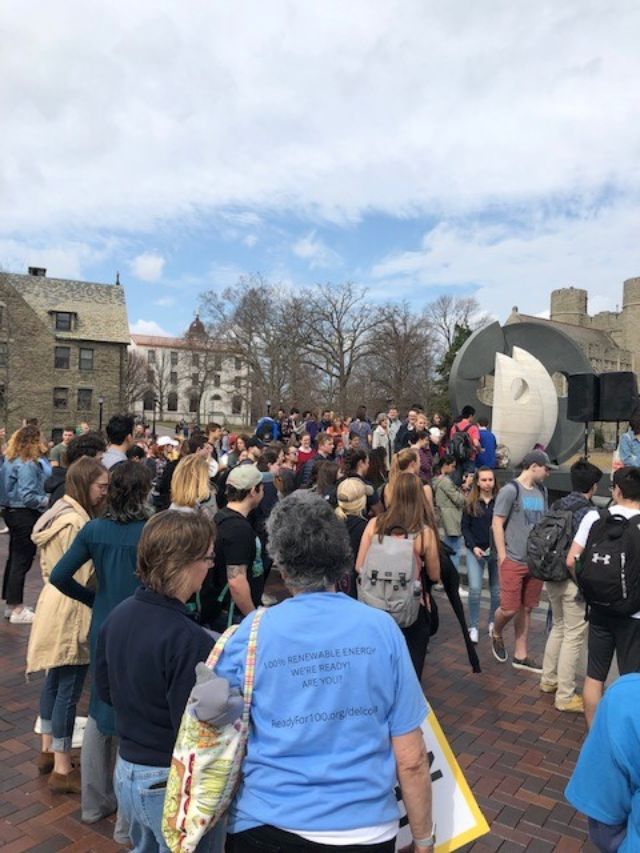 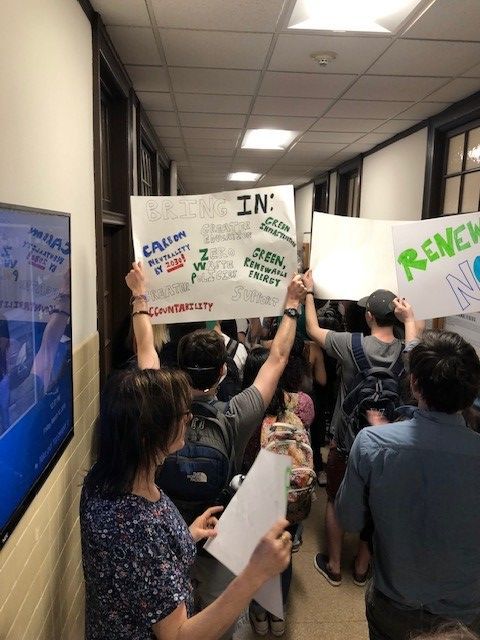 The climate strike on campus was just one among many occurring across over seventy countries on March 15th, 2019. The climate strike was inspired by the call to action by Greta Thunberg, who has been recently nominated for a Nobel Peace Prize for her climate activism. Participants in the University’s strike gathered for a peaceful demonstration at the Oreo, with their own homemade signs and large banners were available to for everyone to write on. The demonstration started with student speakers Gracie Stagliano and Yvonne Nguyen followed by a group march to the office of University President Rev. Peter M. Donohue, O.S.A., Ph.D. to present him with two demands:

1. Move the University’s carbon-neutral pledge date up to 2030

2. Enter into a power purchase agreement for renewable energy by 2020 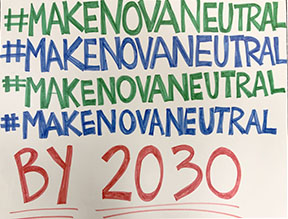 #MAKENOVANEUTRAL poster used during the demonstration.

For more information check out our Villanova Digital Library or contact the University Archives.

A special thank you to Dr. Whitney Martinko for reaching out to the archives asking about Villanova's participation with Earth Week and Luisa Cywinski, Director of Access Services, for the discovery of the 1970 Earth Week schedule.