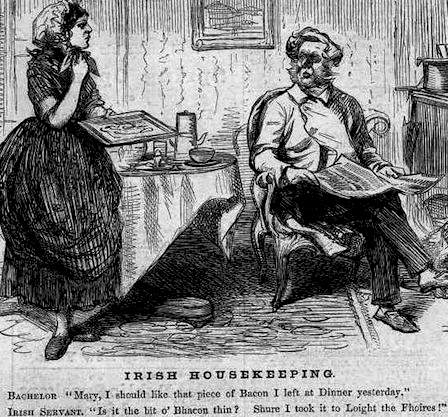 The latter half of the 19th century saw a lot of immigration from Ireland to major port cities along the eastern seaboard of the United States, especially Boston, New York, and Philadelphia. Upon their arrival Irish immigrants were greeted a kind of phobia from Americans since they were not Anglo-Saxon Protestant. Immigrants would often have to settle for low paying jobs, and it was not uncommon for unmarried Irish women to work as domestic servants for wealthy families. Effingham B. Morris, one of the wealthiest men in Philadelphia and the surrounding areas, was no stranger to hiring Irish servants. In each census that Morris lived on the property, at least four or five Irish servants were always listed.[1] However, each census had a new list of servants listed, showing that this was more of a temporary position. However, there is the question whether the servants left on their own accords or they were fired.

In his article “Irish Domestic Servants: ‘Biddy’ and Rebellion in the American Home 1850-1900,” Andrew Urban looks at the caricature of “Biddy,” which is supposed to representative of the Irish women who worked in domestic servitude upon their arrival in the United States. These women often had to compete with African-American women, especially post-Civil War, for these positions. Biddy is a nickname for Bridget, a name that was really only common among the Irish immigrants. In the fall of 1871, Harper’s Bazal published an article simply titled “Bridget,” and the main focus of the article was looking at what went wrong with the employment of female Irish servants as well as whether or not the task of transforming these women into capable servants was a lost cause.[2] These frustrations with their servants caused some employers to propose highly controversial solutions at this time, many of which were not seen through.[3]

In the view of native-born Americans, that is to say those who were white Anglo-Saxon Protestant, these Irish women were defying tradition gender roles.[4] By 1855, 74 percent of all domestic servants in New York were Irish women, and these numbers were probably very similar in the Philadelphia area.[5] Upon their arrival in the United States, many Irish immigrants struggled to find work, and many women would work in the area of domestic service in order to support themselves and their families. In the eyes of American women, this was unusual, and some of them may have even felt threatened by it. Many saw these servants at threats to order in the home.[6]

Another aspect of these Irish women that Americans felt threatened by was their Catholicism. Anglo-Americans often portrayed Irish domestic servants as not only immediate threats to order in the home but also to colonial subjects who by immigration arrived on the doorstep of a Protestant United States.[7] Catholics were viewed as inferior to Protestants at this time, and with more and more of them arriving, there was fear they would outnumber the Anglo-American Protestants and thus begin to take over. Thus, they felt responsible to the character their servants since they were incapable of reforming themselves.[8] There were certain tendencies that were often described as “quintessentially Irish,” such as stealing from employers and inviting their “myriad of cousins” into their employers’ homes as well as being rather destructive.[9] In magazines, “Biddy” was often portrayed as a “petty thief” that was in awe of the wealth of her employers and could not resist stealing from them.[10]

Desperate to find a solution as to how to deal with “Biddy,” Americans, most notably journalists and other observers of the domestic situation, looked abroad to Great Britain for advice.[11] They believed the British would be able to help offer advice on managing Irish servants because of the rigid class system in place there that allows families there to hire servants of their own country, allowing things to run more smoothly there.[12] However, Britain is a rather different place than the United States. It is argued that servants in Britain have an understanding of themselves as a class, and thus they knew of their obligations to other classes.[13] There is also the matter of tradition concerning servants in Britain. In comparison to the United States, the British have a longer lasting tradition of servants serving families and often servant families will serve the same family for generations. There was even consideration of using English servants to replace “Biddy,” but again this would prove to be unsuccessful.[14]

There was also a difference in the way Americans and the British viewed the threats the Irish posed on their respective societies, but both did view the Irish as inferior to themselves.[15] The British, just like Americans, portrayed Irish domestic laborers as clumsy and poked fun at their accent, but this was done in a more patronizing way rather than malicious.[16] Instead, the stereotype of the Irish servant was portrayed as “light-hearted, light-headed, and light-heeled” rather than destructive according to their American counterparts.[17] They provided comedic material. Since the British did not see the Irish domestic laborers as a direct threat to their ways of life, their portrayals are less to prove the Irish are going to be the demise of domestic life. It was around this time in Ireland that Charles Stewart Parnell was campaigning for Home Rule in Ireland with the Irish Parliamentary Party, which was something the British were not willing to allow. Under Prime Minister William Gladstone, the Irish Government Bill of 1886 was prevented from passing. However, these events did not really change the British portrayal of their Irish laborers.

Effingham Morris was no stranger to hiring Irish domestic servants throughout his life. Growing up in Center City Philadelphia he had them in his household, and he continued to hire them once he moved out to Lower Merion in 1886.[18] An interesting thing in each census is that he had a new group of servants, most of who were from Ireland, and this trend continued the entire time he lived on the property.[19]It was not uncommon for Irish women to stop working in domestic servitude once they were married, which could be part of the reasoning behind this notion of a new set of servants for each census. However, based on the information concerning the portrayal of the Irish “Biddy” in Urban’s article, a new idea comes into play. There is a chance that he or his wife Ellen fired some of their servants for insubordination or maybe accusing them of stealing. This division of class within the home is very much present amongst the wealthy in the Philadelphia area, and this can be seen by the portrayal of Irish domestic servants in American media during this time period.

"Many Americans saw Biddy as a more immediate dangerous threat in the context of the American home, where the 'perpetual revolution' and 'domestic anarchy of the Irish servant endangered middle-class households." -Andrew Urban 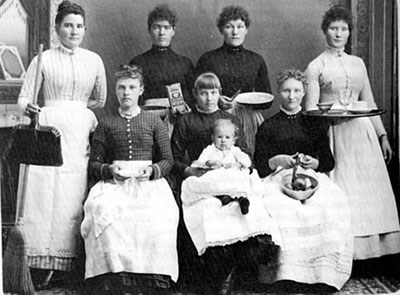