Without a doubt, one of the most influential inventions that occurred during the 19th century was photography.  Everywhere one looks in contemporary America, there is evidence of the amazing impact photography has had on both the evolution of fine art and cinema as well as imaging technology, such as the scanner used at Falvey's Digital Library which captures and digitizes the pages of Lane's manuscript.  So it is no surprise that Lane writes about this specific advancement throughout his autobiography.  But before one glances at Lane's writing about early photography, a look at the history of this advance in technology is in order.

In the summer of 1826, French inventor, Nicéphore Niépce, created the first permanent photograph by way of light hardening chemicals coating glass resulting in the term heliography or "sun writing".  About a decade later, on January 7, 1839, another French inventor, Louis Daguerre devised the Daguerreotype. (Rosenblum 22)  The Daguerreotype procedure offered a way of fixing an image onto a polished metal plate; the first of which was taken in 1839 of a Paris street, capturing only one pedestrian who happened to be still long enough (while getting his shoes shined!) to be captured by the long exposure time. (Warner 12)  This same month, William Henry Talbot announces his calotype design (the method of fixing an image projected inside a camera obscura onto paper, through the mediation of a negative which would eventually be the better of the two photographic methods. (Rosenblum 23)

Although Lane did not personally own a camera during his life, he spoke highly of the invention and on several different occasions received photographs as gifts.  The first of these photographic presents was made for Lane on his 70th birthday in 1885.

He kindly remembers the gift as such:

Another pleasant feature of the occasion was the photographing, engroupe, of the entire family, from the front steps of the familiar old domicile, the likenesses, with the exception of that of the little Elizabeth, who moved a trifle during the operation, being remarkably truthful and life-like, considering the large number of persons embraced in the group.  All, from the greatest to the least, were provided with copies of the picture which will be prized more and more, as the years go by, and especially so, as from old age or disease the familiar faces are re-removed  very  and the physical vision of the survivors. (Lane 419)

For many 19th century families like Lane’s, the photographing of one’s family members in served several purposes.  One of those purposes being (with the higher death rates and families estranged by distance in those days) a photograph could help immortalize or preserve the memory of a deceased or far away relative.

A wonderful example of a photograph, or in this case a Daguerreotype, filling in for the physical absence of a loved one is seen in Lane’s return from his 2 year hiatus in the West coast and his three year old son recognizing him at once:

Fred, then lacked but three weeks of being three years old, and was as much afraid of an ordinary man, a stranger,  as he would have been of a grizzly bear. On Sunday morning, his mother left him asleep in the bed with me. After awhile, the youngster awoke, and raising himself “on end”, took a good look at me, and then, turning to his mother, exclaimed “O, Ma, ‘tis Pa!”. Truly a “wise boy”, that,  to so readily recognize his “dad”, after so long an absence, considering the fact that the youngster was less than five months old, when I left home. I presume, however, that the frequent family confabs in regard to my expected arrival, with frequent peeps at the Daguerrotype  of his illustrious progenitor, recently received by the family, had a good deal to do with refreshing his recollection. (Lane 238)

And as one will see in Lane’s second photographic gift, given to him on his 75th birthday and as was recounted:

One very pleasant feature of my 75th birthday anniversary, which I omitted to notice in the proper place,was the reception of a very fine 24 x 30” nicely framed picture of the Old Homestead, from the good step-son and brother Walter B. Manning, of Georgetown, Brown County, Ohio; enlarged by him from a 4 x 6 photo taken by him while on visit to us some two or three years before.  This handsome present arrived just in the nick o’ time, and was very greatly admired by by all. (Lane 429)

And finally, the last photograph, S. A. Lane will receive before his passing, is:

one of the most pleasant episodes of the season being the taking of the picture of the youngest grandchild, Albertina, in the baby-carriage made for the dear first child, Sarah Maria, fifty-five years before. (Lane 445)

One may be surprised that the gift of a photograph would thrill Lane so much so as to make it into his memoir, but one must remember that in photography's infancy, foe one to take a portrait one had to remain still for an extended period of time.  As Lane pointed out in one of the excerpts above, a small child with an even smaller attention span could very easily be missed during the shot if they moved at all during the exposure time which then would have been about eight minutes.  Although eight minutes feels like eternity to the modern person, it was indeed a great improvement from the even earlier exposure time of 8 hours.

From early Daguerreotype processes and William Fox’s invention of the callotype to the widely used Kodak camera (introduced to the public in 1888, with paper used in place of heavy glass making it more convenient and easier to use for the masses), Lane was witness to it all, allowing him both the luxury of innovation as well as the utmost appreciation of its evolution. 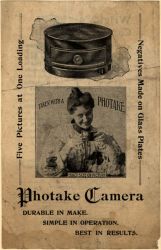 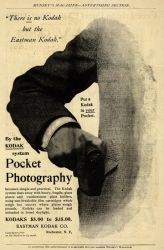 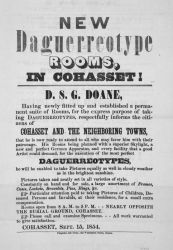 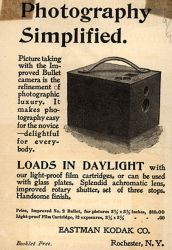 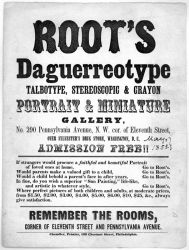 6. Pictures for the million! 12 beautiful gems for 25 cts ... 2000 pictures daily. Large and small photographs as cheap as can be made in Boston. Card photographs! In every style. Satisfaction guaranteed. Hussey & Ruggles ... Boston. Propeller Press
Printed Ephemera Collection; Portfolio 69, Folder 49