What would civilization be like without invention?  Following this is an equally important question: what would invention be like without patents and the protection and rights that, as a result, are provided to the inventor?  Before discussing the history and importance of invention and patent, one must be clear of the difference between the two terms: Invention is the discovery or creation of a new configuration, composition of matter, device, or process. Some inventions are radical breakthroughs in realms such as technology and science which more often then not extend the boundaries of human knowledge and experience. Sometimes an invention is more of a progressive step from a pre-existing model or idea and is commonly known as an innovation. A patent, however, is a set of exclusive rights granted by the government to an inventor for a fixed period of time in exchange for a disclosure of an invention. (Wikipedia; Invention, Patent)  But to understand this unique facet of American industriousness, one must understand the attitudes and upbringing most young men like Samuel Lane were raised with during the 19th century.

During the Victorian era in America, science and technology were rapidly progressing, and it was no surprise that inventions as well as inventors were being produced tenfold.  As a result of, or perhaps resulting from, this boom in industrial progress, “much of the population possessed some familiarity with the basic elements of technology… as the widespread practice of leaving home during adolescence to pick up skills in a trade, a traditional social institution for the transmission and accumulation of more detailed technological knowledge, was both widely accessible and capable of adapting to many of the new developments and to the general quickening of pace of advance over the 19th century.” (Khan 399)  This "hands-on" upbringing was extremely evident in Lane’s early life growing up in Suffield, Connecticut.  In his first few pages, Lane recounts the many skills he acquired when he was a young lad.

Lane lists skills such as:

These skills helped equip Lane with the experience he needed to become familiar with the trades of “the various mechanical branches carried on [such as] wood-work, blacksmithing, painting, trimming +c.” (Lane 5)  Lane’s father was no exception to this technological progress as one soon finds within the first 10 pages of his memoir. In these pages, Lane reminisced about his father, Comfort Lane, who like many other men of that time carried on a business within a specific trade.  For Comfort Lane that trade happened to be the “building of Stage-Coaches”.  Before the advent of the modern automobile, Stage-Coaches were one of the main modes of transportation, and Lane admirably reflected in his writing that, “’Staging’ [was] in fact the greatest business of the country.” (Lane 5)  However, as the subsequent pages soon reveal, Lane’s father was not merely a man of one occupation, for he was, also, “something of an inventor.” (Lane 9)

Lane recounts the many “labor-saving devices” his father came up with including “horse-power machinery” which Lane remembered with vivid detail in the following passage:

This horse-power was under a large staging, at the South end of the shop, connected with the paint room above, and reached by a broad flight of stairs in front of the shop, up and down which carriages, wagons +c were run for painting, delivering +c, as desired. This power consisted of a central vertical, octagonal wooden shaft from which extended, about eight feet from the ground, eight horizontal arms, about twelve feet in length, to the ends of which was attached a rim, or wheel, about twenty-five feet in diameter. Wooden cogs depended from the under side of this wheel which fitted into a pinion about two feet in diameter, on the end of the driving shaft which extended into and part way through the shop. The “motive” power of this wonderful machine consisted of “Old Bob”, the family horse, attached, in the rear, to a horizontal lever extending from the central shaft to the outer circle, and made to travel in the proper circular course by a strap extending from the bit to the end of a spring pole extending from another angle of the central shaft to a point a few feet forward of his nose. On the horizontal lever, about mid-way, was located the “Engineer’s” seat, a position which was often filled by myself, which in hand, during my boyhood days, an employment that went very nicely for a little while, but one that used to become terribly monotonous, both for the driver and “Old Bob”, on a four or five hour’s pull. (Lane 9)

But Lane’s father did not stop there.  Lane provides his readers with the somewhat shocking fact that his father was also an inventor of a cotton gin aptly named “The Suffield Cotton Gin”.  In his autobiography, Lane continues to explain the various stages of how his father came about inventing such a machine along with the road blocks and failures many inventors, like Comfort Lane, of that century faced.  He hoped to provide his future readers with an insider's look at the process of invention and patent law.

Lane began first by giving extensive detail of his father’s version of the well known cotton gin originally invented by Eli Whitney at the end of the 18th century.  Lane accomplished this task with the aid of the patent documents his father possessed.  Established in 1790, the U.S. patent system “required inventors to reveal information about their invention through written specifications and drawings and […] models as part of the application process." (Cooper 963)  Because the cotton gin had already essentially been invented, Lane’s father had to meet the patent law’s “requirement to distinguish” which involved enumerating “specific parts or features of the improved device or process in which the novelty resides.” (Dood 1000).  This meant that before Lane’s father could get his hands on a patent, he had to meticulously describe each nook and cranny that made his cotton gin unique from any other that had been patented before hand.

Lane gave his readers a full look inside this specific step with a letter his father obtained in 1825:

Securing Letters Patent.
Well, the “Suffield Cotton Gin” was at length completed, and father visited Washington for the purpose of getting it patented, in which he was successful, much less “red tape” then being necessary in the procuring of Letters Patent than is now required, as will be seen by the following copy of the important document, the original, of which, on parchment, is now in my possessing
[insert wavy line here]
“The United States of America,
“To all to whom these Letters Patent shall come:
“Whereas Joshua Leavitt, Comfort Lane and Thaddeus Leavitt, Citizens of the United “States, have alleged that they have invented a new and useful improvement, in the machine for “separating seed from Cotton, which improvement they state has not been known or used before “their application; have made oath that they do verily believe that they are the true inventors or “deservers of the said improvement; have paid into the treasury of the United States the sum of “thirty dollars, delivered a receipt for the same, and presented a petition to the Secretary of “State, signifying a desire of obtaining an exclusive property in the said improvement, and “praying that a patent may be granted for that purpose:

The Lane family had hoped that Comfort's acquisition of a patent would have been enough to ensure the Suffield Cotton Gin's success while resulting in fortune but, alas, it fell through the cracks of history like many other inventions of its time. Despite all the work his father and team of mechanics put into the Suffield Cotton Gin, its fate was sealed by both “the [cotton] planters [who] were distrustful of the ability of their negroes to successfully operate a machine so much more delicate and complicated in its construction than the machines then in use” and the sudden and unexpected death of the inventor himself, Comfort Lane. (Lane 21)

But the topic of invention did not stop with Lane's father.  As discussed earlier, many young men during Lane’s time grew up with a fair if not prolific familiarity with tools and trades of different technological realms.  Lane was most certainly a part of this youthful wave of self sufficient industrialites.  During his first employment away from home in the city of South Lee as a shop attendant, Lane devised a one-of-a-kind contraption that provided his reader with both a humorous slice of 19th century American life as well as an inside look at the inventive mindset of that same period.

In the following excerpt, Lane described his inventive method of keeping the unwanted rear-ends of the drunken patrons from his employer's store's counter:

With a small sized gimlet I bored, from the under side of the counter, until the point of the gimlet just pricked through the top, the hole thus made being invisible to the eye, except on the closest inspection.  I then adjusted a small sized darning needle in the end of a short lever, so arranged that by a string attached to the other end and carried over a small pulley to the desk, several feet off, I could, by a pull, project the point of the needle upward, through the pants of any person who might be sitting on that particular portion of the counter.  My first practical test of the apparatus was a very comical affair, indeed.  When the loungers had all got comfortably mounted in position, and the usual village gossip was being proceeded with, pretending to be very busy with the books, I gave the string a slight jerk, watching the effect out of the corner of my right eye.  The fellow I was experimenting on, as the point of the needle struck him, gave a slight upward start, but immediately settled back into position again.  A few minutes afterwards, I gave the string a little harder pull.  The victim gave a more vigorous upward start, and quickly passed his hands under the seat of his pantaloons; but, feeling nothing sharp there, again settled down, and went on with the story that he happened just then to be relating.  After a little I gave him another thrust, a little harder still, which caused him to jump from the counter, and not only pass his hand over the seat of his pants, but also over the surface of the counter in search of the cause of his annoyance.  Finding nothing he again rubbed his seat and his conversation.  In a few minutes, and just as he had reached the “nub”  of his story, I gave the string a jerk that elevated him about six inches, perpendicularly, whereupon he jumped from the counter in great wrath, and seizing the fellow sitting next to him from the counter, also, and was about to give him a severe pummeling for pricking him; but the fellow so vehemently protested his innocence, and ignorance, that he finally let him off… (Lane 38-39) 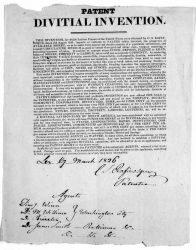 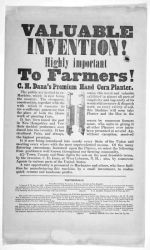 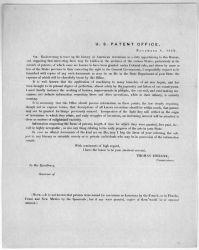 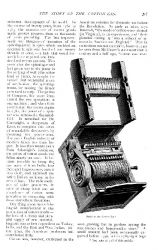 3.  U. S. Patent office. November 8, 1849. Sir: Endeavoring to trace up the history of American inventions as a duty appertaining to his Bureau and supposing that interesting facts may lie hidden in the archives of the various states ... I respectful
Printed Ephemera Collection; Portfolio 199, Folder 25.