FALVEY MEMORIAL LIBRARY
Home Search Guides Help
You are exploring:  Library  >
Exhibits Home  >
A Great Thing for our People: The Institute for Colored Youth in the Civil War Era  >
Documents  >
Men of Color, To Arms! Now or Never!

Men of Color, To Arms! Now or Never!

This is our Golden Moment. The Government of the United States calls for every Able-Bodied Colored Man to enter the Army for the THREE YEARS’ SERVICE, and join in fighting the Battles of Liberty and the Union. A new era is open to us. For generations we have suffered under the horrors of slavery, outrage and wrong; our manhood has been denied, our citizenship blotted out, our souls seared and burned, our spirits cowed and crushed, and the hopes of the future of our race involved in doubts and darkness. But now the whole aspect of our relations to the white race is changed. Now therefore is our most precious moment. Let us Rush to Arms! Fail Now and Our Race is Doomed on this the soil of our birth. We must now awake, arise, or be forever fallen. If we value Liberty, if we wish to be free in this land, if we love our country, if we love our families, our children, our homes, we must strike NOW while the Country calls: must rise up in the dignity of our manhood, and show by our own rights arms that we are worthy to be freemen. Our enemies have made the country believe that we are craven cowards, without soul, without manhood, without the spirit of soldiers. Shall we die with this stigma resting on our graves? Shall we leave this inheritance of shame to our children? No! A thousand times No! We WILL Rise! The alternative is upon us; let us rather die freemen than live to be slaves. What is life without liberty? We say that we have manhood – now is the time to prove it. A nation or a people that cannot fight may be pitied, but cannot be respected. If we would be regarded Men, if we would forever SILENCE THE TONGUE OF CALUMNY, of prejudice and hate; let us rise NOW and fly to arms! We have seen what Valor and Heroism our brothers displayed at PORT HUDSON and at MILLIKEN’S BEND; though they are just from the galling, poisoning grasp of slavery, they have startled the world by the most exalted heroism. If they have proved themselves heroes, can not we prove ourselves men? ARE FREEMEN LESS BRAVE THAN SLAVES? More than a Million White Men have left Comfortable Homes and joined the Armies of the Union to save their Country; cannot we leave ours, and swell the hosts of the Union, to save our liberties, vindicate our manhood, and deserve well of our Country?

MEN OF COLOR! All Races of Men – the Englishmen, the Irishmen, the Frenchmen, the German, the American, have been called to assert their claim to freedom and a manly character, by an appeal to the sword. The day that has seen an enslaved race in arms, has, in all history, seen their last trial. We can now see that OUR LAST OPPORTUNITY HAS COME! If we are now lower in the scale of humanity than Englishmen, Irishmen, white Americans, and other races, we can show it now.

MEN OF COLOR! BROTHERS AND FATHERS! WE APPEAL TO YOU! By all your concern for yourselves and your liberties, by all your regard for God and Humanity, by all your desire for Citizenship and Equality before the law, by all your love for the Country, to stop at no subterfuges, listen to nothing that shall deter you from rallying for the Army. Come forward, and at once Enroll your Names for the Three Years’ Service. STRIKE NOW, and you are henceforth and forever FREEMEN!

In the summer of 1863, Confederate General Robert E. Lee invaded Pennsylvania with his Army of Northern Virginia. In Philadelphia, the African American community recognized an opportunity to prove their manhood and loyalty to the United States by volunteering in the Union Army to defend their state and country. Community leaders printed the broadside “Men of Color, To Arms! Now or Never!” to encourage African American men in the city to enlist, and to remind them what was at stake for men and women of color across the United States. One version of the broadside was visible throughout Philadelphia, printed on four foot by eight foot paper. 55 men signed the broadside. 54 of these men were leaders of the African American community in Philadelphia; among this list are a number of Institute graduates, faculty, or fathers. The 55th signer was the frequent visitor and noted abolitionist Frederick Douglass. 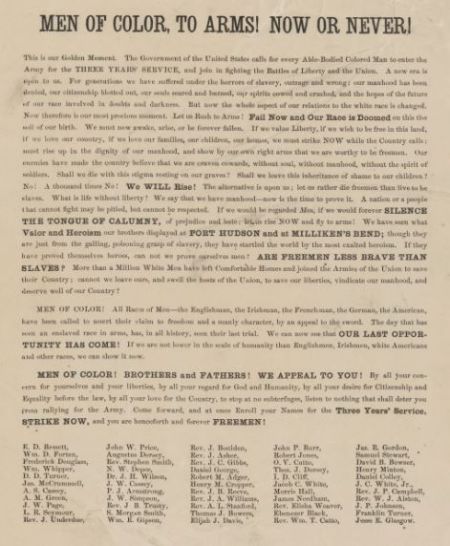 Men of Color, To Arms! Now or Never!