James M. Baxter, who had the distinction of being the only colored Principal of a public school in Newark and was the Dean of the Newark staff of Principals upon his retirement, died suddenly of heart disease at his home in that city yesterday. Mr. Baxter had completed forty-five years’ service in the Newark educational system, and to him was given much credit for the opening of schools for colored children in Newark.

His death recalls a lively contest as to the right of a colored child to enter High School upon graduating from Grammar School. The controversy ended with a decision in favor of the negro race after an earnest plea from the colored Principal. He insisted that colored Grammar graduates have the same privilege of entering the Newark High School as others who had met the requirements of the Grammar grades, and the first negro pupil to be so admitted was graduated under Mr. Baxter. His last official position was as Principal of the Market Street School in Newark, an institution exclusively for colored children.

Mr. Baxter was 64 years old. He was born in Philadelphia, and began teaching in Newark in 1864. He was then only 19 years old. A widow and five children survive him. One of the colored Principal’s sons is a dentist, Dr. James L. Baxter; another is a student at the University of Pennsylvania, and there is a daughter who teaches school in Newark. Mr. Baxter received glowing tributes from city officials and members of the Newark Board of Education.

James M. Baxter, Jr. died on December 28, 1909. The following day, this obituary appeared in the New York Times. The memorial praised Baxter for his life as an education and for his efforts on behalf of African American students in Newark. 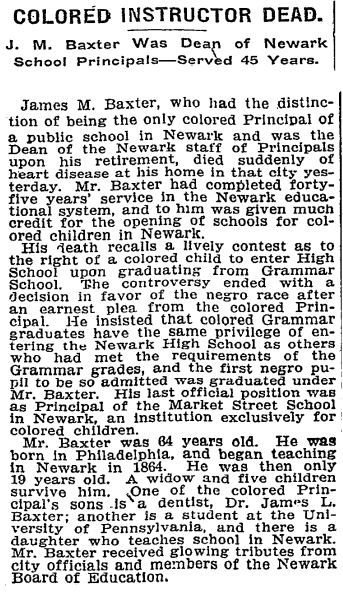